A Reggie Roadtrip: Baltimore and Washington

Several weeks ago, Boy and I (along with our most beloved Pompey) took a road trip to visit friends and family in Baltimore and Washington.  We had a delightful time. 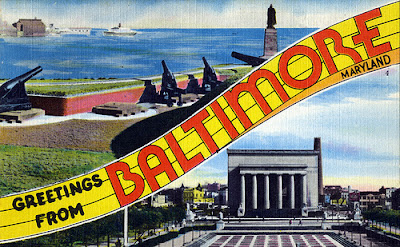 Before leaving on our trip I was asked by a neighbor here in the Hudson River Valley, "Why would you want to go there?"  To which I responded (rather snappishly, I must admit), "Because the last time I checked there's rather a lot to see and do in Baltimore and Washington, that's why!"

And there was, and we did, Dear Reader, in the all-too-short time we had in these two illustrious American cities.

Our first stop in Baltimore was the new Four Seasons Hotel, where we checked in for a three-night stay.  Located in the trendy Harbor East area of the city on the water's edge, with stunning views of Baltimore's inner harbor, the hotel is a gleaming glass tower, lavishly appointed with every imaginable luxury.


Our supremely comfortable room had splendid views of the inner harbor.


One of the reasons that we like to stay in Four Seasons Hotels, Dear Reader, is that—other than that they are lovely, beautifully appointed, and have superb service—they welcome one's furry, four-legged friends, too—so long as one's such companions weigh under twenty pounds.  That means we can take our darling pug Pompey, who weighs just shy of fifteen pounds, with us on such trips.  Not only do the Four Seasons' welcome man's best friend, but they thoughtfully equip rooms of guests accompanied by such faithful companions with a dog bed and bowls, and also toys and treats!


We had dinner the night we arrived in the hotel's very handsome restaurant, Wit and Wisdom, where I would most definitely recommend ordering the restaurant's signature lobster pot pie entrée.  It was divine.


Oh, and do not fail to request the restaurant's blue-cheese-stuffed olives when ordering Reggie's preferred cocktail—an ice-cold Beefeater Gin martini—as the olives are delicious enough to make this grown man cry with joy.  And I don't even like cheese stuffed olives!

The next morning we headed straight to the Baltimore Museum of Art, where we spent the better part of the day reveling in the BMA's marvelous collections.


Although the BMA is justifiably famous for its breathtaking Cone Collection of Impressionist and post-Impressionist art, it is also very strong in its holdings of American decorative arts.  It is these that drew us to the BMA, like bees to honey, given our interest in American antiques.


As readers of this blog well know, Reggie has a "thing" for early-nineteenth-century French gilt bronze clocks depicting George Washington.  I lusted after this one, attributed to Jean-Baptiste Dubuc (1743-1819),  in the museum's collection:


One of the reasons we visited the BMA was to photograph an American classical secretary bookcase, circa 1825-1835, in the museum's collection that is attributed to the cabinetmakers John Meads (1777-1859) and William Alvord (1766-1853).


Made in Albany, New York, the BMA's secretary bookcase is nearly identical to one in our own collection at Darlington House, also attributed to Meads and Alvord.  We bought ours from the dealers Charles and Rebekah Clarke ten or so years ago and were inspired to do so by our familiarity with the one in the BMA's collection, as shown in the preceding photograph.  We had come to know the desk from studying it in Wendy Cooper's Classical Taste in America, a book that has been a meaningful influence on our collecting.  Other examples of furniture made by Meads and Alvord can be found in the collections of Hyde Hall, in Cooperstown, NY, and the Minneapolis Institute of Art, among other institutions.


The secretary bookcase in the BMA's collection was commissioned by James Vanderpoel (1787-1843), a prominent lawyer and statesman who lived in Kinderhook, New York, in the house shown in the following photograph.  The desk remained in the house until only twenty-five years ago.  The Vanderpoel house has for many years belonged to the Columbia County Historical Society, which for some unfathomable reason de-accessioned the secretary bookcase from its collection in the late nineteen-eighties, when it was acquired by the Baltimore Museum of Art.


The Vanderpoel House is attributed to the architect/builder Barnabas Waterman (1776-1839) and is a lovely and beautifully maintained Federal house that is open to the public.  I encourage a visit to see the house, Dear Reader, should you ever find yourself in Kinderhook, New York.  Although not proved definitively, we believe that our own nearby Darlington House was also designed and built by Waterman, as it shares many of the Vanderpoel house's architectural details and stylistic flourishes, albeit on a slightly reduced scale.


Afterwards we spent a breathtaking half-hour examining one of the museum's marvelous period-room installations, the Oval Room from Willow Brook House, a long-since-torn-down Palladian-style villa built in Baltimore in 1799 by Thorowgood Smith, a wealthy merchant-shipper who was the city's second mayor, from 1804 to 1808.

These photographs do little justice to the Oval Room's loveliness.  It is beautifully scaled, with tall ceilings and handsome proportions.  The plasterwork, gorgeously picked out with paint, is original.


Within the Oval Room one finds one of the BMA's greatest treasures: an intact, thirteen-piece set of painted Baltimore furniture made in the first decade of the nineteenth century by the brothers and business partners John Finlay (1771-1851) and Hugh Finlay (1781-1831).  The Finlay Brothers advertised themselves as "fancy furniture manufacturers" and specialized in producing the painted furniture that Baltimore is justifiably famous for amongst those of us who appreciate antique American furniture of the highest quality.  What makes the set in the museum's collection particularly noteworthy is that the pieces are decorated with painted images of seventeen of Baltimore's most noteworthy Federal-era houses, only two of which survive today.  The images of the houses on the chairs are attributed to Francis Guy (1760-1820), an English-born landscape artist working in Baltimore at the time.


One of the (two) settees in the set includes a rendition of the still-standing Homewood House, one of the true monuments of Baltimore and one of Reggie's favorite destinations in the city.  The house, which is owned by Johns Hopkins University and is open to the public as a house museum, is beautifully restored and furnished and contains one of Reggie's favorite rooms in America, its reception hall, which I posted about previously in my series Reggie's Rooms.


After visiting the BMA, we stopped by Homewood House to take in the structure's current restoration program, as seen in the preceding photograph.  It is so pleasing that Johns Hopkins takes such good care of Homewood House.


One of our primary reasons for visiting Baltimore was to meet Meg Fairfax Fielding, of the marvelous blog Pigtown Design.  If you aren't already familiar with Ms. Fielding's blog, Dear Reader, I highly encourage you to visit it often (she posts every other day or so), as I know you will find it as amusing, interesting, and eclectic as I find it and its charming author.  We were thrilled when Meg suggested throwing a cocktail party in our honor during our visit, followed by dinner afterwards with a few of her closest friends at a new favorite restaurant of hers in the city, the oh-so-of-the-moment Food Market, opened only one or two weeks previously.


We had an absolutely delightful time meeting Meg and her friends, and we found her to be charming, funny, and an all-around good egg (one of Reggie's highest accolades).  Meg's friends clearly (and rightly) adore her, and they were as charming and amusing as our hostess.  Such fun!


The Food Market was positively popping when we arrived after cocktails and was filled with hipsters and locals out for a festive evening.  The joint was jumping!  We were immediately shown to our table (it is obvious that Ms. Fielding has sway in this town), and we had a delicious, zesty dinner fueled with libations and hilarious conversation.  What an evening we had!


I must admit that we were moving slowly the next morning, what with all the excitement and imbibulation of the night before.  Fortunately, the day I planned for us was fairly low-impact and largely devoted to easygoing entertainment and mindless relaxing.  When plotting out our trip to Baltimore, I made sure we could take in an Orioles ballgame at the city's splendid Camden Yards baseball park.  I had wanted to see a game at the marvelously retro ballpark ever since it was built twenty years ago, and I made sure my wish came true during our visit.  We attended a day game with Boy's sister Kitty and her husband, Bart, where we sat in killer seats close to the field, just to the left of home plate.  We all had a lovely time.  The Orioles hosted the Washington Nationals that day, which was great fun, as both Boy and I grew up in Washington, home to the old Senators.  The day's game was referred to as the "Beltway Series."  The game was most enjoyable, and the home team was enthusiastically supported by its adoring fans.  The whole experience brought home just why it is that baseball is—at least in some circles these days—still considered to be the Great American Pastime.


After the game we bid Kitty and Bart adieu, and then made a beeline back to the Four Seasons, where Boy and I spent the rest of the afternoon lolling about the hotel's sybaritic outdoor infinity pool.  I'm not usually a fan of infinity pools, Dear Reader, but this one was gorgeous.


The pool is perfectly situated to take full advantage of the hotel's expansive views over the harbor.  Lounging by it I felt more as if we were staying at an island resort than at an urban hotel.


It was difficult to tear ourselves away from the chaise longues at the pool, but we did so knowing that a delicious seed-to-plate dinner awaited us at the nearby Waterfront Kitchen restaurant, where we had a delightful, simply prepared meal.  I highly recommend it.


Boy and Pompey and I made an early night of it and were in bed with the lights out by 10 p.m. so that we would be well-rested for the next stop on our journey, Washington, DC, which is the subject of the next post in this series . . .
Posted by Reggie Darling at 3:30 PM