A Reggie Roadtrip: Atlanta, Part I

It's been some time, Dear Reader, since I've done a "Reggie Roadtrip" post, and—as a number of you have noted recently—it has been some time since I've posted anything.  Today's essay (the first of a two part series) remedies that deficiency with my reportage on a whirlwind trip that Boy and I took several weekends ago to Atlanta, a city that I hadn't visited in more than twenty years.  Our agenda there included meeting a number of the area's noteworthy bloggers, reconnecting with old friends, shopping, eating out, and visiting a smattering of sights in what is indisputably the South's biggest, boomingest city. 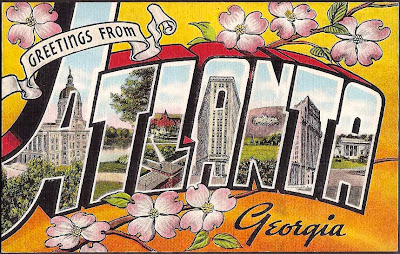 We began our journey in the Delta Sky Lounge at LaGuardia Airport where we fortified ourselves with several rounds of pre-flight cocktails and handfulls of Chex Mix.  Reggie is fortunate to have access to most of the airlines' members lounges when he travels.  It is one of the few remaining perquisites of being an Investment Banker, and a soothing antidote to the horrors of airport security lines—even for those of us with priority privileges.


Upon our arrival at Atlanta's mindboggle-ingly enormous Jackson-Hartsfield Airport I upgraded our rental car to a new Cadillac ATS, the brand's recent entry into the sporty, entry-level luxury car market dominated by Audi, Mercedes Benz, and BMW.  It had been some time since I'd driven a Cadillac, and I was curious to check it out.  Our ATS drove like a dream and had a lot of pep to it, but it was a bit cramped for those of us—such as Reggie—who stand at over six feet tall and carry a BMI that could use (ahem) some improvement.  Such minor complaint notwithstanding, I enjoyed test-driving the Cadillac ATS during our visit to Atlanta.


Our first destination in Atlanta was the city's Four Seasons Hotel, where we checked in and had a quick bite before heading out to see what the town had to offer.  As I have written many times before here on this blog, Reggie is a big fan of the Four Seasons chain, and he usually stays in one of their hotels whenever he has the good fortune to find himself in a city that has one.  I was interested to check out the Four Seasons' Atlanta outpost, as I had never stayed in it before.


The Atlanta Four Seasons is a monumental limestone tower, and its lobby is exhilaratingly, uh, garish.


Not that it bothered Reggie one bit, mind you.  Reggie enjoys a bit of questionable taste every now and then.  The Atlanta Four Seasons' grand staircase reminded him of the one in Rhett and Scarlett's Atlanta mansion, the one that Rhett carries her up, kicking and screaming, and then ravishes her.


Just as Mrs. Butler apparently enjoyed herself that night, we had a lovely time at the Atlanta Four Seasons.  The service was superb, and the staff couldn't have been more accommodating, or nicer.


Our spacious and well-appointed room at the hotel was on a high floor, and had a terrific view out over Midtown Atlanta.


Atlanta has come a long way since it was burned to the ground in 1864, Dear Reader, during what some in the South still refer to as the "War of Northern Aggression." Visiting Atlanta 150 years after the war's end it is (almost) unfathomable to me that our nation came to such blows then and that so many died for "the Cause."  It certainly seems very remote to this writer today.  But that was not the case as recently as my own parent's generation, many of whom knew people who remembered the Civil War, and some of whom experienced it first hand.  One of my mother MD's grandfathers, for instance, was a drummer boy in the Union Army.  I and my brother Frecky own swords that were carried by ancestors of ours who fought in the war, on both sides.


With but a few hours on our hands before our first commitment, Boy and I headed over to Sid Mashburn, an Atlanta-based men's clothing store that I first learned about from reading Maximinimus, one of my favorite blogs.  Dusty Grainger, who writes said blog, is a great appreciator of all things sartorial (among many other appealing attributes) and sang the praises of Sid Mashburn's emporium in one of his recent posts.  After reading Dusty's enthusiastic endorsement, I knew that Boy and I simply had to visit the store during our trip to Atlanta 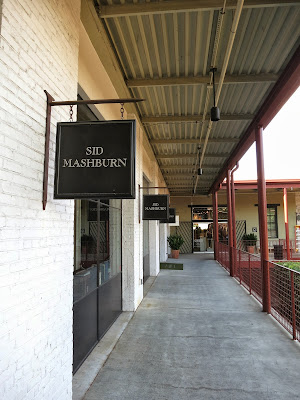 The eponymously-named Sid Mashburn is, in this writer's humble opinion, worth a trip to Atlanta alone (and for you ladies, there's an equally-lovely store for the fairer sex right next door, named Ann Mashburn, after Sid's wife).


But be forewarned, Dear Reader!  Should you be so fortunate (or foolish) to darken (either) store's doors I assure you that you will be seduced by a powerful siren song, and will find yourself helplessly stumbling away with armloads of expensive, beautifully-made clothes and accessories and a decidedly emptier bank account. 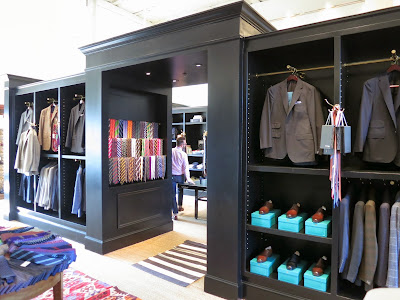 At least that's what happened to Boy during our not-one-but-two visits to Sid Mashburn during our all-too-brief stay in Atlanta.  Reggie knew that we were in serious trouble when the very helpful and accommodating Brad, who assisted Boy during our visits at Sid Mashburn, greeted us with "What are you drinking?" and then obligingly (and repeatedly) supplied it to us to imbibe while we examined the store's delectable offerings.  As I watched Boy succumb to the heady charms of Sid Marshburn's inventory I couldn't help but recall the clothes shopping scene in one of my favorite movies, Sunset Boulevard:


But, unfortunately for dear Boy, I wasn't about to play the Norma Desmond character in Sunset Boulevard and pick up the tab for his shopping spree at Sid Mashburn—Boy was there on his own.

I must say, though, that our vist visits to Sid Mashburn were one of the highlights of our trip to Atlanta, and well-worth the financial damage done to Boy's bank account, as he came away with a splendid replenishment of his wardrobe.  There is a reason, Dear Reader, that the expressions "You only go around once" and "You must strike when the iron is hot" are clichés.  Because they are true!  Boy simply had to "bite the bullet" and "take the plunge" at Sid Mashburn—for when would we pass this way again?

On the other hand, I can just hear MD snorting if she were still alive and reading this, "Yes, and the same applies to 'A fool and his money,' too, young man!"  Ah, well . . .


Realizing that we were in danger of running behind for our first commitment in Atlanta—a cocktail party that we were hosting at our hotel—we quickly wrapped up our visit at Sid Mashburn and jumped into the Cadillac ATS for (what we thought would be) a quick trip back to the Four Seasons.  But it didn't turn out that way, Dear Reader.  Traffic in Atlanta can be horrendous, particularly on the city's main thoroughfares.  What we assumed would be a five minute drive turned into a forty minute one, and we were late for our own party.  Fortunately everyone else was, too, given the congestion in the streets leading up to the hotel.


So why did Reggie throw a party when he visited Atlanta, you might ask?  Because he could, that's why!  As I have explained elsewhere in this blog, Reggie is a party person, and he enjoys not only going to other people's parties, but throwing them, too.  As I was preparing for our trip to Atlanta, I realized that we knew enough people in the area that it would be fun to plan a party while we were there.  I invited a number of Atlanta's noteworthy lifestyle bloggers to it—some of whom I've met before and some of whom I hadn't—and also a handfull of my non-blogger friends.  Each were invited to bring "significant others" or a friend, and all-in we had around fifteen convivial souls assemble for the festivity.


Because most of my non-blogging friends in Atlanta (coincidentally) work at Sun Trust (which is not all that surprising, since I got to know them when we overlapped at various financial firms in New York), I decided to call our cocktail party "Reggie's Bloggers & Bankers Party."  Needless to say, it was a super fun evening!  Liquor flowed, food was plentiful (and delicious), and talk (and laughter) was nonstop.


From the blogging world I was honored to have as my guests Jennifer Boles of The Peak of Chic, Julieta Cadenas of Lindaraxa, Barry Leach of The Blue Remembered Hills, and Terry Kearns of Architecture Tourist.  During the party I learned that Allin Tallmadge, the husband of a dear friend of mine from the banking world, has recently started a blog of his own focused on cheese (but I can't remember the name of it or I'd provide a link to it here).  Not surprisingly, Allin is passionate about his subject, and he owned the now much-missed Tallmadge Cheese Market in Montclair, New Jersey (the subject of a "Hot from the Kettle" YouTube video) before relocating to Atlanta with his wife several years ago.


Although the invitation for the cocktail party said it was from six to eight p.m., there was enough fuel, food, and fun being had by all (beautifully and deliciously supplied by the very solicitous staff at the Four Seasons' Park 75 Lounge) to keep Reggie's Bloggers & Bankers Party going well beyond eight pm, with the last guests not departing until after ten—despite our pleas for them to please, please stay for "just one more" before heading out into the night.

While I'm not exactly sure, I think Boy and I may have consoled ourselves with one last drink at the bar before heading upstairs, but I admit that by that point in the evening it all gets a wee bit blurry. . .

Next:  Rain, the Swan House, more rain, the High Museum, even more rain, a return visit to Sid Mashburn, pouring rain, and dinner at the Iberian Pig

All photographs, unless noted, by Reggie Darling

Posted by Reggie Darling at 1:26 PM