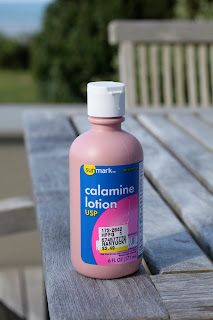 photographs by Boy Fenwick
Posted by Reggie Darling at 9:09 AM 24 comments:

We are on Nantucket for our summer beach holiday, which is one of the reasons for the relative infrequency of posting here.  That, along with my rather demanding responsibilities at the Investment Bank where I work.  One does have a day job after all. 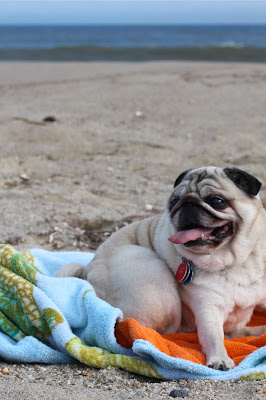 As some of my readers may remember, last year at this time I wrote that Pompey didn't care for visiting the beach here on the island.  In fact, not one bit.  It was all so wet, sandy, and noisy—what with waves crashing and seagulls screaming.  This year, though, he finds it a bit more tolerable.  At least he wasn't outwardly miserable when Boy took him there the other day just before cocktails.
It does help, though, that he has a nice fluffy towel to sit on.
He sends you his snuffles and kisses, Dear Reader.
photograph by Boy Fenwick
Posted by Reggie Darling at 11:13 AM 32 comments:

This week's Saucer of the Week is of yet another stand, continuing the theme of my last installment in the series.  My inspiration for again featuring a stand, as opposed to a saucer, was a comment I received from a perspicacious reader who was convinced that the stand I featured in my previous post was most definitely designed to hold an oval teapot.

And right he was.


In our cupboards at Darlington House we have an example of such a stand that has not become separated from its intended teapot.  It is identical in form to the stand I featured last week, albeit decorated differently, with gilt-painted banding and flora.  We found the stand with its accompanying teapot in an antiques shop in Hudson, New York, a decade or so ago.  Both stand and teapot are in perfect condition, and appear to have been little used since they were made almost two hundred years ago.


Having a stand to sit underneath a teapot ensures that any errant drips from said teapot will be contained by the stand, instead of falling unfortunately upon one's linens or polished tables.  It also helps insulate the table's surface from the boiling heat of a freshly filled teapot.

How delightfully clever our ancestors were, and how frustratingly humdrum it is that today such stands are not routinely provided with teapots sold in most retail establishments.

I have been so deeply moved in writing this post that I have decided that it is my duty to mount a campaign for the return of teapot stands.  And I have already come up with a name for it, too: The Society for the Preservation and Reinvigoration of the Teapot Stand, (abbreviated as "SPaRTS").  I urge you, Dear Reader, to join me in my noble pursuit of this vitally important initiative.

Can I count on your support?

Photographs by Boy Fenwick
Posted by Reggie Darling at 8:18 AM 17 comments: