One of the true joys of summer is when garden roses come into flower. 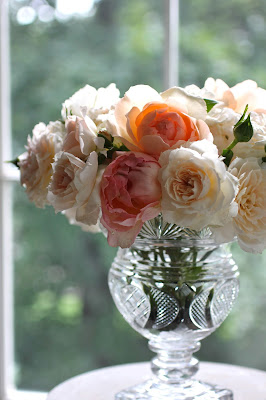 You can't easily find garden roses in Manhattan, where I live during the week.  The roses available in the city are mostly mass-produced and imported from far away, and are bred for uniformity and longevity.  While beautiful, they are somewhat soul-less, I think.  They are too perfect.  And they often don't have a scent to them.

Garden roses, on the other hand, are blowzy and luscious, and all the more beautiful because they are not uniform.  That's their allure to me.  Another pleasure is they fill the house with their heady scent.  I love them.

We are fortunate to have garden roses available at the Farmers' Market near us in the country, from the good ladies of Cedar Farm.  Their stand at the market is always filled with gorgeous and unusual flowers, and is a must-stop destination for us every Saturday morning that we are at Darlington.  Boy has arranged a selection of garden roses that we picked up from them yesterday, and has arranged them in an early nineteenth century Anglo-Irish sweetmeat dish in our drawing room.

They will soon start dropping their petals, slowly surrendering them to the inevitable passage of time.

It is with sadness and gratitude that I write today's post, a tribute to my dear sweet Pompey, who died two weeks ago after fourteen happy, play-filled years.  Pompey's amusing antics graced this blog many times since its inception, and he was a great favorite of many of you, Dear Reader.


As I reported in an earlier post, we almost lost Pompey a few short months ago.  We were fortunate that we didn't, though, and the time we had with him since then allowed us to cherish him all the more, loving him every moment we were blessed with his company until it came time for us to say our final goodbye.


Funny, faithful, and loving, Pompey was all that I could have ever hoped for in what I truly believe is "man's best friend."  He certainly was mine.  I did adore him so.


I fell in love with Pompey the day we brought him home to Darlington House as a wee puppy, fourteen years ago.  I've been besotted with him ever since.  So good natured, so friendly, such a fond companion Pompey was.  I called him my "little one" and my "little man."  Boy called him his "sweet familiar," a name that always made me smile.


I knew that when we retrieved Pompey from the animal hospital after his scare in May that we had him on borrowed time.  Although enfeebled by his ordeal, Pompey rallied over the ensuing weeks, and there were times when he almost resembled his old playful, darling self.  A week before he died, though, he started to decline, and it became clear to Boy and me—at first individually and then acknowledged between the two of us—that our sweet fellow was beginning to check out.  The evening before he died Pompey went into a spiral, and no amount of painkiller medicine that I administered to him was able to alleviate his suffering over a long and sleepless night.  Poor, dear little man.

By four in the morning I knew that his time was up.


I woke Boy, and the two of us got out of bed with Pompey and carried him downstairs.  We took him out to our screened porch, where the three of us had spent many happy times over the years.  We waited there together as the dawn broke, Pompey lying on the sofa between the two of us, breathing slowly.  A calm settled on us as we sat there quietly, our little family close together for the last time, listening to the sounds of the birds waking and calling their early morning songs.


I telephoned the vet's office as soon as it opened, and arranged to bring Pompey in later that morning.  His end was merciful and swift, and Pompey died with dignity, sheltered in the embrace of those who adored him most, bathed in our tears and love.

I shall miss my dear sweet darling for the rest of my days.


I am truly blessed, Dear Reader, to have had the privilege of Pompey's loving friendship for fourteen years.  I am grateful that Boy and I were able to raise and nurture him with love and care, and that he lived with affection his entire life.  And I am fortunate to have known the devotion of Pompey's faithful companionship for more than a quarter of my own life.  I know I am a better person for it.


Thank you, dear Pompey, for all the joy, laughter, affection, and fun you brought to me and to those who loved you over the years.  You were a very special, very much loved friend.

May you rest in peace, dear little one.  I will always love you.

More of Darlington House in AD

I thought it would be appropriate for me to mark my return to the blogosphere by showing additional photographs of Darlington House that appeared in the June issue of Architectural Digest magazine.


The full run of photographs of Darlington House, along with the accompanying article written by the marvelous and erudite Mitchell Owens, is featured on AD's website, and can be found here.  I'm thrilled by it.


I must admit that having a house that I live in appear in a design magazine has always been a fantasy of mine.  That Darlington House was chosen to be featured in Architectural Digest, the pinnacle of such magazines in my view, makes me dizzy with pleasure.


When I leaf through AD's pages featuring the houses, apartments, yachts, and castles of celebrities, billionaires, and tastemakers I can't help but wonder how it is that our own little plain Jane of a house was chosen to appear in its pages?  It almost takes my breath away.


Even so, a little voice in the back of my mind keeps asking, "What's next, Reggie?  What else do you have up your sleeve?  When are you going to buckle down and actually get to work on that book of yours that you've been talking about?"

Well, Dear Reader, I'm not going to let those inner voices rain on my parade here quite yet.  I plan on continuing to revel in the pleasure of the AD story having run, resuming my regular posting here on RD, and allowing myself the space to sit back and enjoy it all.

All photographs by William Waldron and styled by Howard Christian.  All images courtesy of Architectural Digest
Posted by Reggie Darling at 8:40 AM 22 comments:

Reggie is pleased to announce that he is returning to the blogosphere. 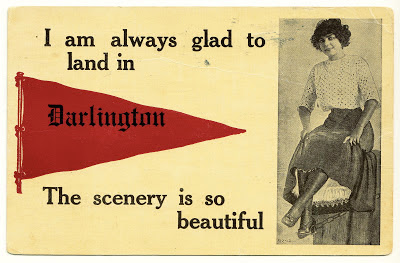 He got rather a lot accomplished over the last five weeks, and he is now able to refocus his sights on his silly scribbles here.

I'm planning any number of posts, Dear Reader, that I hope you will enjoy.  Please stay tuned!

Reggie received the antique postcard featured here from his dear friend Jane Maxwell, of whom he is inordinately fond.  What a delightful and thoughtful gift it was!
Posted by Reggie Darling at 7:50 PM 22 comments: