Reggie's Rules for Navigating One's Way Around Manhattan Like a New Yorker, Part I

Like most residents of Manhattan, Reggie knows his way around town and has learned the most efficient ways of getting to where he wants to go when he is out and about in the city.  Some of what he has mastered is merely common sense, but some of it is unique to living in New York City.  He is often surprised, and frequently exasperated, when he is confronted with people bumbling about town who are either not familiar with the basic rules for navigating one's way around the city or who choose to ignore them. 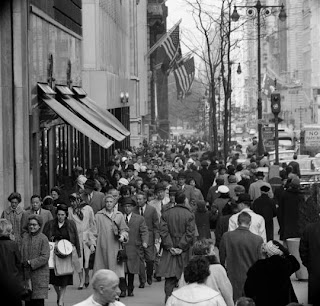 Today's essay is the first in a series I will be posting of Reggie's Rules For Navigating One's Way Around Manhattan Like a New Yorker.  My subject today is what I consider to be the rules for successfully navigating the sidewalks and streets of the city on foot, as a pedestrian.  I plan on following it with additional posts of Reggie's Rules for using taxis and public transportation in the city, when passing through doorways, and other miscellanea relevant to the subject.

Reggie's Rules for Walking Around Manhattan Like a New Yorker

New York is a city of walkers.  We use the sidewalks as our highways and our shoes as a form of transportation.  Walking is the most efficient and fastest way to get around many parts of Manhattan during the day, particularly Midtown, and it is a pleasant way to travel greater distances as well, at least when one has the time for it.  Furthermore, walking is good exercise, especially for those of us who spend much of our days sitting at desks high up in the city's office towers. 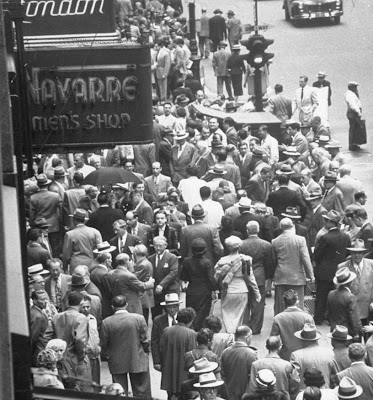 Reggie's Rules for Walking on Sidewalks:


1.  When walking on the sidewalks of New York, move it or get out of the way

New Yorkers use the city's sidewalks to actually go places.  When walking on busy sidewalks in Manhattan, either pick up the pace and walk like a New Yorker, or move to the side and let the city's on-the-go inhabitants pass you by, unimpeded by what they consider to be your dawdling.  This rule applies to everyone, including those slowpokes who live in New York and visitors from elsewhere who aren't accustomed to walking around in a busy city.
2.  Don't walk two and three abreast on a crowded sidewalk

It clogs up the sidewalk and annoys the people who are trying to get around you and go somewhere.  Be mindful of the other pedestrians who have places to go and a deadline for getting there.
3.  Just as when driving a car, stay to the right side of a busy sidewalk when heading in whichever direction you are walking

This is a particular problem in Midtown on Fifth Avenue on the blocks between the Trump Tower and the Apple store at the GM Building, where the sidewalks are clogged during daylight hours with out-of-towners gawking and milling about.  Stay to the right when walking on sidewalks—the traffic moves faster and more smoothly that way. 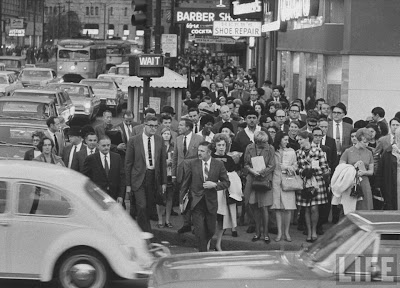 Reggie's Rules for Crossing the Street:


1.  When traversing a crosswalk at a busy intersection, do not walk out into approaching traffic when you don't have the light
If you do, do not then give the driver who honks at you while swerving to avoid hitting you a dirty look, or the finger, or shout obscenities at them.  It is okay for you to object to aggressive or thoughtless behavior from a driver when you have the right of way and they do not, but it is not acceptable for you to do so when you are the one who is ignoring the traffic light.

2.  Have your wits about you when jaywalking
New York is full of people who blithely jaywalk across traffic-filled streets mid-block, dodging cars with seemingly nary a care in the world.  Although Reggie considers jaywalking to be acceptable when the streets aren't busy, he does not recommend it when they are full of moving automobiles that could potentially mow you down.  Furthermore, he believes that you should never defiantly (or stupidly) jaywalk across a busy street with your back turned to the approaching traffic, as he sometimes is astonished to see idiots pedestrians doing from time to time.  If you do so you are sorely tempting fate.  You cannot count on the fact that the driver will see you, or will even care if he doesn't.  You are not immortal.
3.  When stepping between cars parallel parked on the side of a street, first check to see if someone is in one, and if so whether they are trying to park or get out of the space; do not walk between two cars when one of them is moving

That is, unless you don't care if your knee joints are crushed by the moving car when it accidentally pins you to the stationary one.  I know this seems like a highly obvious, common-sense rule, but you'd be surprised how many times Reggie has witnessed some numbskull pedestrian who is oblivious to it. 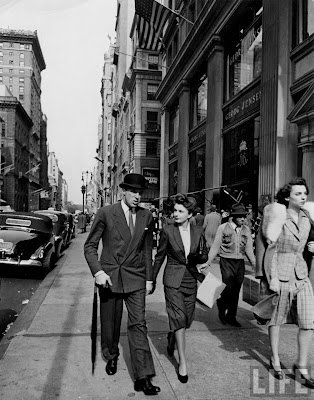 1.  Say "excuse me" when seeking to get around someone who is blocking your way, or when you have inadvertently bumped in to them

Your mother was right on that one.  Have some manners, please.
2.  Leave the golf umbrella at home


Only use regulation-sized umbrellas when walking on a crowded New York sidewalk in the rain.  It is piggy and thoughtless to use a huge golf umbrella, and possibly dangerous to the people around you who have to duck to get out of its way.
3.  Don't be embarrassed to ask for directions

Even born-and-bred New Yorkers get lost in Greenwich Village!
4. If you have time, stop and offer assistance to tourists who are obviously lost
They are an important part of the city's economy and should be welcomed by its citizens.  Consider it to be your good deed of the day.

And there you have it—Reggie's Rules for walking around Manhattan like a New Yorker.  Follow them, and you will be assured of cruising along the city's sidewalks and crossing its streets with ease, and pleased with your agility and facility in doing so.  That is, until you bump headlong into some dunderhead who either isn't aware of such rules or who thinks they are above such things.  If that happens, and after you say "excuse me" to them (even though they should be the one begging your forgiveness), please direct them over here to Reggie, who will be more than happy to straighten them out in these matters.
Next: Reggie's Rules for Taking Taxis and Livery Cars In and Around Manhattan