Boy and I spent the Independence Day weekend in Chicago.  Our primary purpose for going there was to attend the lavish wedding of his assistant, Clarissa Montgomery, in Lake Forest.  But we scheduled enough time before and afterwards to poke around Chicago, too, a city that neither of us had visited for some time. 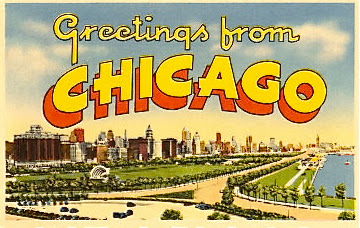 Living in New York it is rather easy to fall prey to the generally accepted view there that everywhere else is "out of town."  In other words, that when compared to the Big Apple any other city comes up short.


Chicago is a gorgeous, beautifully maintained city full of handsome architecture, broad boulevards, beautiful parks, marvelous restaurants, top-notch shopping, and a stunning lakeside situation.  It is, in a word, magnificent!


First things first, though: Chicago is really clean.  The city is exceptionally well maintained, with none of the grit and dirtiness of New York.  The area we spent most of our time in, downtown, is beautifully landscaped and full of parks and street planters gorgeously bedded out with flowers, ornamental grasses and shrubs.  Even though the city's sidewalks and parks were mobbed with people when we were there, I didn't see anyone littering or disturbing the plantings, in contrast to what one would expect to see on a busy weekend in New York.


We were (mostly) impressed by the restaurants we ate in, including Seasons at the Four Seasons Hotel (where we stayed), Pelago Ristorante, Henri, RL, and Terzo Piano at the Art Institute (where we spent a glorious day reveling in the museum's collections).  We did a bit of shopping on Michigan Avenue, a retail thoroughfare populated with all the stores you'd expect to see in a city of international standing.  But most of our time was spent walking around, delightedly taking in the sights, the architecture, the views, and the parks—including several well-spent hours visiting Millenium Park, a stunning testament to modern-day civic design.  We were highly impressed.


The only downside of our visit was how crowded the city was with hordes of people wearing the depressing uniform increasingly seen everywhere you go today in America of tee shirts, cargo shorts, and flip flops.  The only major difference between the sexes we saw on our visit was that most of the males wore baseball caps.  Everywhere you turned in Chicago that's the uniform you saw on people, with only the most minor of variations, such as substituting cheap nylon basketball shorts for cargo shorts, or team jerseys for tee shirts.  It didn't matter where you were, either, it could be on the street, at the Art Institute, in the lobby of the Four Seasons, or in restaurants—everyone was wearing the same thing.  All ages, sizes, socio-economic groups, races, shapes, sexes.  Everyone!  It was mind-numbing.


Needless to say, we felt like complete fishes out of water wearing the summer sport jackets, collared shirts, trousers, and leather-soled shoes that we had on while walking about the city during the day, and we noticed people staring at us and checking us out as if we were somehow strange or exotic looking.  At one point early on in our visit Boy bought a summery cotton bow tie and put it on and wore it out of the store.  He liked the way it looked so much that he wore it for much of the rest of our visit to Chicago.  People on the street there gawped at him as if he were some kind of alien (a very good-looking and smartly attired alien, I might add), and we heard one little girl exclaim, "Look at that man, he's wearing a real bow tie!"


It got us wondering—where were the people like us in Chicago?  Where were the ones who actually took some care with the way they dressed and presented themselves to the world?  Were we complete anomalies?  Had it come to that?


It took us a while before we realized that just as we had left New York for the Independence Day weekend, so had the people like us who live in Chicago also left town.  Either that, or they were holed up in their houses or apartments, visiting friends, or at their clubs—anywhere else that they could go to get away from the hordes of ill-dressed tourists mobbing the streets, stores, parks, and sites of the city.

Of course that was it—we were visiting Chicago on the one weekend of the year when its residents did everything in their power to get out of town!  Once we realized that we roared with laughter.


We then were able to relax and enjoyed the show.  We really did have a lovely time visiting Chicago, and even though we were frequently appalled by what we saw people wearing (or in some cases not wearing), it really was all remarkably entertaining.  And, for the most part, everyone that we saw out and about in Chicago was having an absolutely lovely time, walking around with broad, happy smiles upon their faces, visibly taking pleasure in visiting one of the most marvelous cities in America, if not the world.

And in that respect they were just like us.
Posted by Reggie Darling at 9:39 AM