Saucer of the Week: English Child's Punch and Judy Plate

Several weeks ago, while Boy was out and about doing errands and a bit of idle shopping, he came across a whimsical little plate in a pocket-sized antiques store that belongs to a family of pickers and that has been a most happy hunting ground for us.  It is the same shop, in fact, Dear Reader, where Boy found the souvenir portrait of the inestimable Robert Burns (identified as such by the eagle-eyed Corinthian Columnist) that now graces our dining room's pride of space (we have since had the painting cleaned and the frame restored). 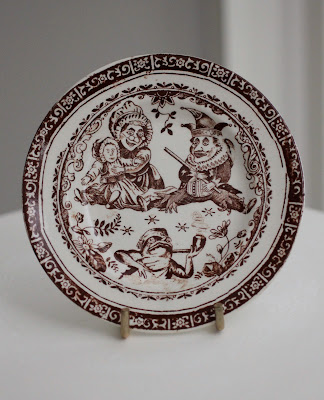 The little plate Boy brought home was designed, I believe, to be used in a child's tea service, and depicts a scene from the Punch and Judy puppet show that was wildly popular in England from the late sixteen hundreds through the mid-twentieth century and continues to be performed in that country to this day.  The brown transfer-print design features Punch with his wife, Judy, who is holding their daughter, accompanied by a pipe-smoking frog nearby.  I had initially suspected that the figures depicted were based on illustrations done by George Cruikshank (1792-1878) in 1828, when a script for Punch and Judy was published for the first time.


However, when I compared the figures on the plate with those of Cruikshank's, it is clear that they are based on later illustrations, perhaps of the 1840s.  The overall design of the plate, though, is unmistakably of the even later English Aesthetic movement, popular in the 1870s and 1880s.  My, what a hodgepodge of inspiration this delightful child's plate is!

When the plate is turned over, a mark is revealed identifying it as having been made by Charles Allerton & Sons, an English pottery active 1859-1942.  Based on what research I have been able to do, and taking into account the style of its design, I date the plate to pre-1889.


While not technically a saucer, my diminutive little plate qualifies for inclusion in this series because of its size (it is only four and one quarter inches across) and because I choose to do so.

The Punch and Judy plate currently sits on a bedside table in one of our guest rooms at Darlington House, where it provides sweet pleasure—one hopes—to our guests and a most decorative and utilitarian repository for their keys, errant buttons, and the small bits of printed papers and spent candy wrappers that one empties one's pockets of when retiring at the end of the day.

I hope you find this little plate as charming as I do, Dear Reader.

Photographs by Boy Fenwick; Cruikshank illustration courtesy of allposters.com
Posted by Reggie Darling at 10:15 AM