Every May for the last twelve years, a very special horticultural event called the Trade Secrets Rare Plant and Garden Antiques Show has been held in rural northwestern Connecticut.  Founded by the inestimable Bunny Williams, the two-day show is a fundraiser for Women's Support Services of Sharon, Connecticut.  The show features vendors of rare and unusual flora; antiques dealers of gardenalia; and providers of tools, pottery (such as those of Guy Wolff, about whom I wrote several years ago), and related crafts.  Trade Secrets is a buying bonanza for anyone who appreciates out-of-the-ordinary gardening resources.  For the last several years the show has been held in Sharon, Connecticut, on the grounds of the glorious Lion Rock Farm, a handsome and substantial working farm.  Lion Rock is no run-of-the-mill farm, but rather it is a gentlewoman's working estate, owned by a successful Wall Street financier.  It is gorgeous.


Boy and I make a point of attending the Trade Secrets show every year, to stock up on unusual plants for our screened porch, for plants to fill our metal urns for the summer, and for whatever else strikes our fancy.  And there is a lot to strike one's fancy at Trade Secrets.  We enjoy going to the show for a number of reasons.  Not only is it a wonderful source for all things flora, and in a beautiful setting, but it is also an opportunity to see the Tribe out in full force.  Trade Secrets draws affluent shoppers from the surrounding Connecticut, New York, and Massachusetts areas.  That means there are lots of well-cared-for, perfectly art-directed ladies with blond hair, straw hats, quilted jackets, and Hunter boots.  And there are also many well-cared-for, perfectly art-directed men who might possibly wish that they, too, were well-cared-for, perfectly art-directed ladies with blond hair, straw hats, quilted jackets, and Hunter boots.  Not surprisingly, given who founded Trade Secrets, one sees any number of fancy Manhattan decorators, antiques dealers, and lifestyle purveyors at the show, busily shopping, visiting, and having fun.  One can also be assured of seeing a certain blond lifestyle goddess who appears at the show every year, without fail, enthusiastically shopping along with the rest of the blondes in attendance. 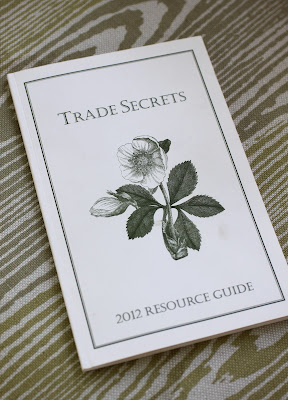 This year the Trade Secrets show was blessed with sunny, balmy weather.  The grounds of Lion Rock Farm were beautifully groomed to a fare-thee-well, and there seemed to be more dealers than ever and blockbusting attendance.  In other words, it was a huge success!


We arrived shortly after the 8:00 a.m. opening for the premium-priced Early Buyers portion of the show and were amazed at how many people had gotten there before us.  Boy was issued buyer's number 339 on his admission bracelet, indicating that more than three hundred people had already entered the grounds by about 8:30!  The parking fields were so heavily planted with Range Rovers, Mercedes-Benzes, and other expensive cars that I was afraid we would have difficulty in harvesting ours when the time came for us to leave.


This year we approached the show with a restrained buying appetite.  We only needed a few potted plants for our porch, and that's what we got.  I refrained from buying any myrtle topiaries from Atlock Farm this year, even though I was sorely tempted.  As I have written before, I am unable to keep myrtle topiaries living beyond a month or two, and I couldn't bear the misery of watching yet another one wither and die under my supposed administrations.  Boy did find three diminutive variegated coleus plants and a charming fern at Atlock Farm's booth, and a bay standard with great potential at the nearby Hoffman and Woodward booth.  He also bought three striking bromeliads at David Burdick Daffodils & More, which has been an excellent source for unusual daffodils for us in years past.


We often combine our visit to Trade Secrets with stops along the way home at Privet House in Warren, Connecticut, and Hunter Bee Antiques in Millerton, New York.  Last year we met our friends James and Calista Littlefield for lunch at the White Hart Inn in Salisbury, Connecticut.  Recently renovated by new owners and beautifully decorated by Michael Patrik Smyth, the White Hart Inn is everything that one could wish for in a Connecticut country inn.  The lunch we had on one its spacious porches was delightful.


This year we headed directly home to Darlington House after the show, though, as we have much to do to prepare for Memorial Day Weekend, when our dear friends Preston and Digby are spending the holiday with us.  One of the things we have on our docket for next weekend is a visit to a large antiques show in Rhinebeck, New York, about which I will try my best to muster a post.


In the meantime, Dear Reader, do please mark your calendar to attend next May's Trade Secrets show.  And don't forget to tell them that Reggie sent you . . .


More can be learned about Trade Secrets by visiting their website here.


Photographs by Boy Fenwick
Posted by Reggie Darling at 1:33 PM

Labels: decorating, flowers, gardening, out and about, shopping, topiaries