I realized recently that it has been a long time since I've done a restaurant review here on Reggie Darling.  It's not that I haven't been going out to eat, Dear Reader, but rather I haven't felt all that compelled to write about the restaurants I've found myself in lately.  Don't get me wrong—they have (in most cases) been good restaurants, and in some cases they have been very good restaurants.  But each has lacked a certain, well, something to inspire me to take pen to paper (so to speak) and write about it.


That is until last week, when I had the good fortune to find myself tucking into a tasty dinner at Donohue's Steak House, located on Lexington Avenue in the East Sixties.  Donohue's is an intimately-scaled (some would say diminutive), old-fashioned chop and fish joint beloved by neighborhood regulars and others for its authentic, of-another-era, New York dining experience.


Donohue's keeps 'em coming by serving stiff drinks and straightforward, classic American fare that hasn't changed all that much since the Donohue family first opened the restaurant's doors in 1950.  The decor appears to date from then, too, with black, button-tufted vinyl upholstered booths, red table cloths, and black and white checkerboard floors.  I understand the interior has been refreshed over the years, but the Donohues have kept it true to how it originally looked.


Donohue's wood paneled walls are hung with landscapes of the "painted by a real artist" variety, along with a framed newspaper clipping or two about the restaurant dating from when Robert F. Wagner, Jr., was the city's mayor.

Donohue's is one of the breed of old-school, old-style, authentic American restaurants that are particular favorites of Reggie's, whose ranks have been sadly depleted in recent years.  It is cut from the same cloth as the late, lamented Gino's, which used to stand only a few blocks south of Donohue's on Lexington Avenue.  I am happy to report, Dear Reader, that Donohue's appears to be going like gangbusters these days.  I hope it remains popular and in business for many years to come.


I first ate at Donohue's twenty five or so years ago, when I was taken there for dinner by my friends Preston and Digby, who lived (and still do) in the nearby Manhattan House apartment building.  It was with Preston and Digby that Boy and I dined there the night when I took the photographs for this story.


I remember being delighted during my first visit to Donohue's to find myself transported back to the "I Love Lucy" era, which even at the time (it was the late 1980s when I first went there) seemed impossibly long ago to me.  I loved it!


Not surprisingly, the food served at Donohue's—while very tasty and very satisfying—is honest, basic fare.  There's nothing fussy, frothy, or trendy about it, and that's just how its patrons like it.  I'd characterize the kitchen's output as a couple steps up from pub fare.  The restaurant's chalkboard menu pretty much sums it up, listing entrées of steak, pork chops, chicken-pot-pie, broiled fish, and broiled scallops.  You can get an order of lamb chops there, too.

Donohue's entrées come with the expected sides of mashed, fried, or baked potatoes, or white rice.   You'd get a funny look if you asked for brown rice there.  Reggie wouldn't be surprised to learn that the vegetables served at Donohue's arrived on the premises frozen.  Mind you, Reggie is not complaining—he likes frozen peas!


Part of the fun of going to Donohue's (as it is for any restaurant, for that matter) is the people watching.  As I mentioned before, Donohue's is popular destination for many who live in its UES neighborhood, any number of which have been regulars there for many years, and some of whom may even remember the restaurant from shortly after it opened.  It is not unusual to see several canes hanging among the coats there.  But not everyone sitting in Donohue's booths is a card-carrying member of AARP, Dear Reader, for the restaurant is a favorite of patrons under forty, too, who—like Reggie did when he was that age—appreciate the restaurant's strong drinks, hearty, reasonably-priced food, and "other era" charm.  Our friends Courtney and Lowell, who are probably one of the hippest young couples we know, are fans of Donohue's.


One needn't be budget-minded to appreciate Donohue's, though.  I once saw David Rockefeller, who lives around the corner, eating dinner there one night.  And our friends Preston and Digby told us they had once seen Kitty Carlisle Hart dining there with Elinor Gordon, the subject of an earlier post of mine.  I once sat in the next booth to a young man who was at the time much in the news for having allegedly violated securities laws, and who was packed off to prison for it shortly thereafter!


While Reggie is not what one would call a regular at Donohue's, he is always happy to find himself there dining with friends, and he always leaves it satisfied—liquored-up, contentedly full, and ready to totter off to bed.  For those among his readers who appreciate the pleasures of such old-school dining establishments, Reggie highly recommends it. 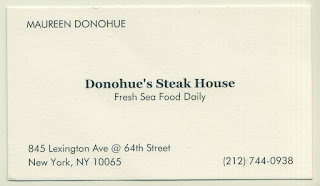 Please note, Reggie has received nothing in return for writing this review nor does he expect to in the future.  He is writing it solely for the pleasure of his readers, which is why he writes this blog in the first place.