During our recent holiday on Nantucket, we were fortunate to be visited for several days by our friends Calista and John Littlefield.  We're crazy about them.  Their visit was a laughter-filled, boozy, uproariously funny jabberfest.  I'm still recovering from its merriment.

Calista is a great fashion plate and shoe diva, and stepped off the jet that delivered her to the island wearing a pair of classic Stubbs & Wootton black velvet slippers that feature an impish red devil wielding a pitchfork.  You know the ones I'm referring to, of course.


Apparently Calista's slippers excited rather a lot of comment among the fellow travelers waiting for their luggage after the flight.  One fellow said to her that the devil featured on her shoes reminded him of one that appeared years ago on a brand of canned deviled ham that he couldn't remember the name of.  None of us could remember it, either, when we spoke about it later that evening over what turned into a veritable waterfall of martinis.  We figured the company that once made the deviled ham had probably long-since dropped its mascot, falling to the pressure of lunatic protesters who threatened a boycott unless the company dispensed with its supposedly Satan-promoting imagery.

Reggie has a long personal history with velvet slippers, Dear Reader.  He bought his first pair thirty or so years ago at Bergdorf Goodman, long before they became the rage of his lifestyle compatriots on the blogosphere.  They were embroidered with a gold threaded fox head.  He still owns them.  Back in the day Reggie would wear his velvet slippers around the house and to parties, and he sometimes would wear them out dancing in Manhattan's downtown clubs late at night.  Most of the time people he came across while wearing them had never seen such a thing, and they almost always had something to say about them, and not always flattering to the wearer.  Ah well, ignorance must be bliss . . . or so I've heard.

I first became aware of Stubbs & Wootton's velvet slippers a decade or more ago, when I first saw a pair of their devilish slippers on the feet of a man at a black tie party.  So clever and so soigné, I thought at the time.  I had to have a pair.

And so I bought myself some shortly thereafter, and I wear them from time to time, usually at dinner parties or to some festive affair.  Unfortunately they are just a wee bit tight on Reggie's feet, and so are strictly party shoes.  In July of this year I bought myself another pair of Stubbs & Wootton slippers as a birthday present to myself, made out of midnight blue velvet embroidered with the sun on one of them and the moon on the other.  My new slippers fit me better than my devil ones do, and so I've worn them out and about more.

So where is all this leading, you may ask?  Well, the other day, Dear Reader, while shopping for groceries at a supermarket near Darlington House, I chanced to find myself in the canned meats section of the store, for reasons that are too mundane to go into here right now.  On one of the shelves of said supermarket I espied a paper-wrapped, diminutive can of Underwood Deviled Ham, featuring the very same impish red devil found embroidered on Calista's and my Stubbs & Wootton velvet slippers.  Eureka!  The mystery was solved! 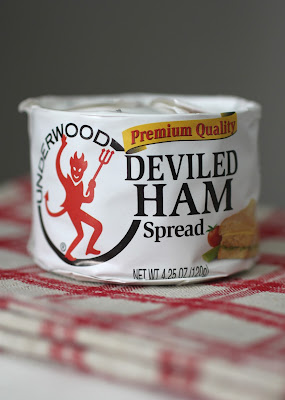 How fortunate it is that Underwood still makes its deviled ham, and still features the same red, pitchfork-wielding little devil on its packaging.  And how clever and amusing it is that Stubbs & Wootton replicated the little creature on its iconic slippers.  How devilicious!

I wonder, though, am I the last one in on this particular joke?