Reggie is a social animal.  He likes gadding about town and country, meeting up with friends and making new acquaintances.  He finds it stimulating and, more often than not, amusing.  And it is a pleasing diversion from the more mundane daily rhythm of one's workaday life.  "All work and no play . . ." as the old saying goes.


We have been on rather a whirlwind of social activity of late.  It is now the "season" here in Manhattan, and there are parties, openings, and benefits galore every evening of the week.  We generally try to limit our running about to no more than two nights during the week, and certainly never more than three.  For, Dear Reader, a too-steady diet of parties and dinners out can be like anything else when overindulged—too much of a good thing.  Several quiet evenings a week at home with the company of a good book or a little bit of television is a requirement of mine for recharging my batteries.


This week is one of those out-three-nights-of-the-week weeks that we rarely find ourselves indulging in.  But we had compelling reasons to agree to such a frenzied social schedule, Dear Reader, including the wish to celebrate friends' accomplishments and also meet up with out-of-town pals visiting the city.  On Tuesday we attended two parties, and I took my trusty Canon point-and-shoot camera along with me to snap some pictures for this post.


Our first stop was the city's magnificent Art Deco Fuller Building where Beauvais Carpets was hosting a book-signing party for Mr. Brian J. McCarthy's hot-off-the-presses first book, Luminous Interiors, published by Stewart, Taboori & Chang.  As many of you know, Mr. McCarthy is the principal of the celebrated, eponymously named interior design firm Brian J. McCarthy, Inc.  I've known Mr. McCarthy's partner, Danny Sager, for many years, and Boy and I wanted to attend the party to help celebrate Brian's accomplishment.


The party was an absolute madhouse crush, with over five hundred people crowding Beauvais' showrooms, all having what appeared to be a lovely time.  And why not?  Even though it was, at times, difficult to navigate one's way across the floor, there were many familiar faces among the crowd to jabber with by simply turning around (including the lovely Lyle Vivolo of Beauvais, Boy's longtime and most-adored rep).  The party was beautifully supplied with what seemed to be an endless army of waiters carrying trays of well-filled wine glasses and platters loaded with yummy hors d'oeuvres.  Reggie particularly liked the mini latkes with crème fraîche and salmon roe that were among the many nibbles offered—they reminded him of one of his favorite appetizers at Swifty's.


What with the long line of attendees queued up to have Mr. McCarthy sign copies of Luminous Interiors, Reggie decided to wait for another day to have his own copy autographed.  I did get to say a quick "Hello" to Brian (only by elbowing my way through the scrum of admirers clustering around him, though) and snap his picture before Boy and I scooted out the door for our next engagement.  I look forward to having Brian inscribe my copy of his book soon, under more leisurely circumstances.


Our next stop was one of New York's legendary private clubs, where Reggie was once a member but gave it up because the food and drink there is so delicious and plentiful that he gained five pounds every time he darkened its doors.  For those of us with a tendency to put on weight, such as dear old Reggie, ready access to such temptation is a dangerous proposition indeed.


The party was held in honor of the very worthy Irish Georgian Society, and we were the guests of Mr. Steven Stolman, man about town extraordinaire and president of Scalamandre.


Unlike the book-signing party we had just come from, one was able to maneuver one's way around the Irish Georgian Society party with ease and stop and chat with the numerous friends and acquaintances that one pleasantly came across there.


Among the party guests were Mr. Mitch Owens of Architectural Digest, who wrote the article about our house that appeared in the magazine's June issue.  I like him immensely.  Mr. Angus Wilkie of Cove Landing and his charming partner, Mr. Len Morgan, were also there.  Reggie had an amusing conversation with Mr. James Andrew of What Is James Wearing, who was there with his partner, Mr. Scott McBee.


The party's dinner was held in a handsome, wood-paneled room.  One of the speakers during the meal was the actor Jeremy Irons, who spoke at length about the restoration of his castle in West Cork, Ireland.  The castle's restoration was a huge undertaking, we learned, as it was a near ruin when Mr. Irons acquired it.


Although one's mind did wander during the speeches at dinner, it didn't really matter to me that Mr. Irons went on as long as he did because he has one of the most beautiful speaking voices imaginable, and I could happily listen to him recite the pages of a telephone book. 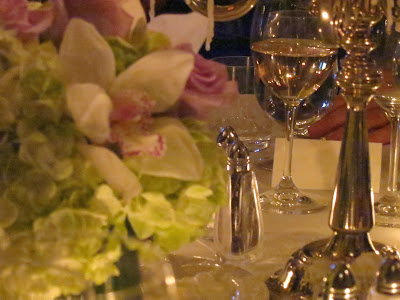 Besides, there was lots to look at during the speeches, including the tables' pretty flowers and decorations.


Adding to the fun was that I was seated next to Mr. Stolman, an amusing bon vivant who had me in stitches for much of the evening.


Mr. Stolman was joined by his partner, Mr. Richard Wilkie, who was also seated at our table.  Also at the table were a number of their Palm Beach friends, who were jolly good company.  After spending the evening with this lively crew I'm thinking that Boy and I just may need to schedule a return trip to the home of The Shiny Sheet sometime this winter.


After dinner we returned to the room where cocktails had been served to find it generously laid out with tables covered with silver platters of exquisite petit fours, and the full bar still open.  While I'm not exactly sure, I think I had to be pulled away from it all by Boy, who claims that I was gobbling pastries and demanding more drink when it was obvious to him (and most likely others, too) that I had been thoroughly, if not over, served by that point in the evening.

Ah well.  My hangover the next morning, Dear Reader, was but a small price for me to pay for all the merriment I had that evening.  Thank you Messers McCarthy and Sager, and Stolman and Wilkie, for including us in the fun!

Labels: notable people, out and about