I've got to get something off my chest, Dear Reader.  I am supremely weary of hearing people drop the F-bomb.  It seems that almost every place I go these days I hear someone using it over and over in casual conversations, in restaurants, at work, in stores, everywhere. 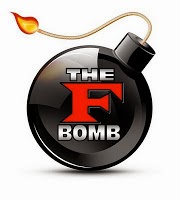 It's almost as prevalent as the mind-numbing use of "like," "uh," and "um" as conversation filler.  But it is far worse.  While those three words may be grating to listen to when repeated endlessly in conversation, they are but tedious only.  Flagrant use of the F-word, on the other hand, is rightly frowned upon by people of refinement and banned from broadcast airwaves (at least for now) for a reason: it is intensely and vividly vulgar.  I believe its use should be reserved for situations and circumstances that are either private or where the speaker has been provoked to the point of explosion. And it most certainly shouldn't be used within earshot of children.

Don't get me wrong, Dear Reader, Reggie is not a prude.  He has been known to use the F-word himself, along with other pithy Anglo Saxon expletives.  He acknowledges that doing so can at times be very satisfying, indeed.  However, he believes the use of the F-bomb in general conversation today has become so prevalent and gratuitous as to have lost its potency, at least in the minds of those he overhears using it repeatedly and unblinkingly in public.

If they stopped to actually listen to themselves, as Reggie is often forced to against his wishes, he believes they might be surprised to hear how crude and unattractive they sound.  And how unimaginative—can't they think of any other words to use?

Maybe not.  At least that's what he concludes when he casts a gimlet eye on many of those he overhears using it in public.

But that's not always the case, Dear Reader.  Reggie is often surprised when he turns to examine who is speaking so fouly to find that it is a person who should know better.  They have fallen into the habit of using the F-word unthinkingly, with no comprehension that it does not reflect well upon themselves (to say the least), nor do they have any consideration that others might find it unpleasant—if not offensive—to listen to.

When I am out in public, Dear Reader, I do not like hearing other people repeatedly use the F-bomb or other rude expletives, particularly strangers at other tables in restaurants, in lines at stores, in places of entertainment, or while walking about the streets of the city in which I live.  I find it ugly and intrusive. So I make every effort not to drop the F-bomb or use other obscenities in public.  Sometimes I slip up, though, because I am far from perfect.  But I try to be sensitive to the fact that there are people within listening distance who may find such language offensive, and so I refrain from using it in public whenever possible.

I think the world would be a better place if more of us did the same, too.

Tell me, Dear Reader, what do you think?
Posted by Reggie Darling at 2:27 PM