The Urns of Darlington: Autumn

This is the final installment of The Urns of Darlington series, in which I show you, Dear Reader, the seasonal rotation of plantings in the large cast-iron urns at Darlington House.  I acknowledge that some of you may find it will be the least interesting installment of the series, since these are the urns upon which the least effort was expended.  And, on one level, you would be right.  But Reggie finds these urns to be the most satisfying of the series.  For these are the simplest.  Simplicity is a quality that Reggie greatly values, given how elusive he finds it to be in much of the man-made world, where the propensity is to not leave well enough alone.


Reggie is proud to say that he adores chrysanthemums.  And he is happy to decorate his property during the autumn with ones from his local garden supply store, an Agway that sits but a little less than a mile from Darlington House.  Reggie says he is "proud" because there are certain circles that consider chrysanthemums beneath contempt, and horridly common.  MD's generation was taught to loathe chrysanthemums, vulgarly known as "mums."  That's because their mothers' generation adored them and, to be frank, over-used them in table arrangements.  Another strike against them was that florists over-relied on them (along with daisies and baby's breath) when creating those awful, long-lived FTD-type arrangements that uglified many a table in this country for far too long, and which Reggie understands are still to be seen in certain benighted households even to this day. 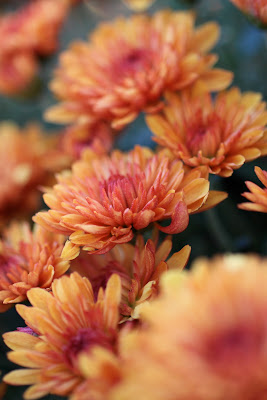 But Reggie adores chrysanthemums, and believes they are a worthy adornment to any household when chosen carefully and used contextually.  He doesn't care at all for the over-hybridized ones seen in many garden centers today, found in garish and unnatural colors such as fuchsia, mauve, or acid yellow.  Actually, he abhores those.  No, he approves only of ones in autumnal hues of rust, deep crimson, and gold.  Those, he believes, are the only appropriate colors for chrysanthemums, at least out of doors, and are the only colors you will ever find filling urns at Darlington House. 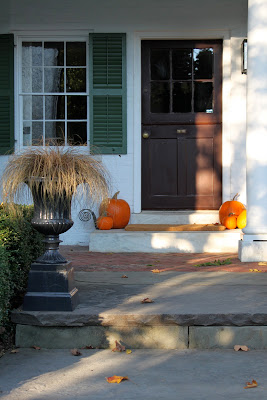 "Wait a minute, Reggie," you might cry in looking at the above photograph, "you haven't done anything to that urn in front of the door at Darlington House!  That's the same grass that was in it in your summer installment of the series!"  And you would be correct, Dear Reader, it is the same grass.  We haven't changed it out this year because we like the way the grass looks far too much to rip it out.  And, besides, it looks appropriately autumnal, in our view.

Rather than replant the urns in front of the door to the house, we decided to decorate the marble step at the door with these marvelous, generously scaled pumpkins grown at Holmquest Farms, in nearby Hudson, New York.  They are quite handsome, don't you think? 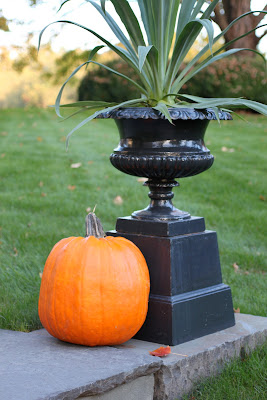 Just as we did at the door to Darlington House so we did at the base of the large urn that sits at the end of the walkway leading up to the house: we placed a large pumpkin next to it.  And yes, you are correct: that is the same handsome Mexican Lilly in the urn that we planted there this summer.
Beauty is simplicity.
And so this draws to a close the four seasons of the Urns of Darlington House.  We are off today to Massachusetts to buy the evergreen shrubs that we will soon plant in the urns for winter, starting the cycle once again.
All photos by Boy Fenwick
Posted by Reggie Darling at 9:44 AM