Several weekends ago Boy and I attended a country auction where we were the winning bidders on a pair of exuberantly painted American fancy chairs, circa 1815-1825.  We bought them to place beneath two windows in our kitchen at Darlington House, a room that has aways looked somewhat under-furnished to us.  With the purchase and placement of these chairs our kitchen is now pleasingly complete and well-furnished.

We were attracted to the chairs because they are a "better" quality, early example of the type, commonly known as "Hitchcock chairs," after Lambert Hitchcock (1795-1852), the Connecticut-based entrepreneur who founded the Hitchcock Chair company in 1818.  Hitchcock chairs were simple and affordable, and were the first mass-produced furniture made in America, with the Hitchcock factories churning out 15,000 of them annually at the firm's peak in the late 1820s.

But such chairs were not only made in Mr. Hitchcock's factories; other workshops in other states also produced them (albeit in far lower quantities).  We believe that the chairs we won at auction may have been made in New York, given their shape and decoration.  Consequently, it is more accurate to refer to our chairs as "fancy chairs," rather than "Hitchcock chairs"--which is the name of a manufacturer and not the type of chair.

When I characterize our chairs as being of a "better" quality, I mean as defined by Albert Sack in his seminal book, Fine Points of Furniture, and also in the later "New" edition, where he ranked early American furniture on a five-point scale, from "good" to "masterpiece."  Although Mr. Sack does not include fancy chairs in his book, his grading system can be applied to many forms of early American furniture--including fancy chairs--and not just those covered in his book.  Needless to say, "better" ranks just above "good," and three meaningful grades below "masterpiece."  In other words, Reggie is well aware that our chairs are a rather nice example of their type, but nothing more (or less). 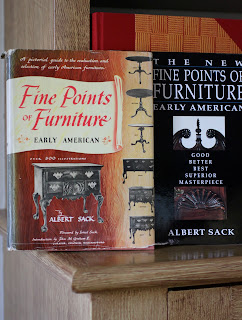 Since we, like so many Americans, spend an inordinate amount of our time in our kitchen (I'm sitting at our kitchen table as I write this), we wanted to get appropriate, interesting, and "better" quality chairs for the room, since we would have to live with and look at them for many of our waking hours.

A pair of chairs similar to ours, but decorated with painted scenes and with caned seats, and of a higher quality than ours (I'd rank them as straddling "best" and "superior" on Mr. Sack's scale), appears in American Fancy: Exuberance in the Arts, 1790-1840, by Sumpter T. Priddy, III.  The book formed the catalogue of a traveling exhibition of the same name organized by the Milwaukee Art Museum in 2004-2005, and which Boy and I traveled to Baltimore to see in early 2005, where it appeared at the Maryland Historical Society. 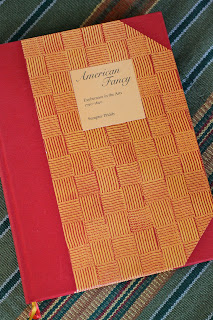 "American Fancy" was a marvelous, eye-opening exhibit that Reggie will never forget.  I highly recommend that you, Dear Reader, seek out a copy of Mr. Priddy's book.  Not only is it fascinating, scholarly, and well written, but it sheds new light on an aesthetic movement, now referred to as American Fancy, that took this country by storm in the first part of the nineteenth century, as the New Repubic was being established.  Not only is it a fascinating book, but it is a handsomely executed one,  too, and is profusely illustrated with page after page of photographs of gorgeous objects that--after reading it--you will never look at the same way again.  Trust me.

So what, exactly, was American Fancy, and what are fancy chairs?

American Fancy was an aesthetic movement that swept this country between 1810 and 1835 (give or take five years on either end) characterized by exuberantly decorated furnishings with painted finishes, sparkling surfaces, plays of light, bright colors, and wild prints.  Much of the wooden furnishings were painted in fanciful "faux" finishes to mimic more costly veneers and materials.

The definition of the word "fancy" in American Fancy is not what many people consider its meaning today, which is akin to "swanky" in this country or "posh" as our English cousins might say.  No, the "fancy" in American Fancy has its roots in "fantasy" (or the old English "fantasie"), referring to a dream state or flight of imagination.  Webster's most closely defines it as "an image or representation of something formed in the mind," or alternately in its archaic use as a "fantastic quality or state."

Until recently, much of what was produced during the American Fancy period was mis-classified as "country," when in fact a great deal of it was made for this nation's burgeoning, urban middle classes.  The naivety of the decoration of much of the goods produced during the American Fancy movement was entirely intentional, and not (usually) due to the lack of training of the artisan who made them, many of whom were highly skilled in their craft.   Most American Fancy goods and furnishings were inexpensively made and sold at affordable prices to people of moderate-to-comfortable means, and were not targeted to the highest levels of the urban elite in this country who preferred more sophisticated, often European-made or inspired, furnishings.

The painting that appears earlier in this essay of Joseph Moore and his family, by Erastus Salisbury Field, is a masterpiece of American art in the collection of the Museum of Fine Art in Boston.  It shows a young, middle class American family in an interior that exemplifies the American Fancy movement.  Although the Moores are shown dressed somberly (albeit fashionably for the time) in black clothing, the room in which they sit is anything but somber.  It is decorated to delight the eye, according to the tenets of American Fancy.  The floor is covered with a wildly colored, boldly scaled carpet, upon which sit black and gold painted fancy chairs and an exuberantly figured mahogany table.  A similarly figured mahogany framed mirror, decorated with gilt moldings, hangs between the windows.  The bright red-green-gold of the woven ingrain carpet is echoed in the red curtains and green exterior shutters at the windows.  All in all, it is a pretty and fanciful interior.

Fancy chairs is the generic name for the inexpensive, mass-produced chairs made during the American Fancy movement in such factories as Mr. Hitchcock's, often (although not always) with painted finishes.   Two are featured in the painting of the Moores, with Mr. and Mrs. Moore shown sitting on them.  One of the chairs (or one from the same set), is shown in the photograph immediately following the painting, which descended in the Moore family and is now in the collection of the MFA Boston, along with the painting.

A nearly identical chair is in the collection of the Metropolitan Museum of Art in New York City.  And six of the same chairs, except with caned seats, are in our collection at Darlington House, where we use them as occasional chairs in the less formal rooms of the house.

Whoever owned our chairs once valued them sufficiently to place brass plaques on the top rails of each of them, with something engraved on them that has since been worn away by generations of polishing. 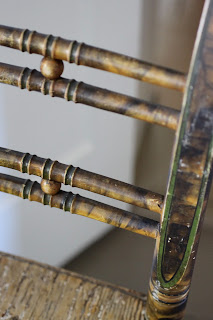 Even though Boy cleaned the chairs after we brought them home with a mixture of Murphy's Oil Soap and water, they are still rather dark and discolored with age.  However, even though their surfaces have darkened over nearly two hundred years, you can still see that they were once quite vivid, decorated with smoked yellow paint, green banding, and gilt balls. 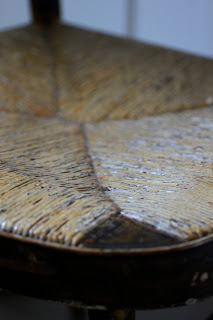 As you can also see in this photograph, the chair's original rush seats retain their original painted surface, a common finish at the time they were made. 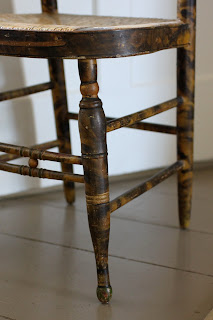 The chairs are in remarkably good shape, with no evidence of any repairs.  They were clearly revered by their owners in the past, and are remarkably pristine survivors from when they were made, unlike many other fancy chairs that weren't treated so kindly over the years.

I am quite happy to have this pretty pair of American fancy chairs sitting in our kitchen at Darlington House.  I hope to one day decipher the worn engraving on the brass plaques and learn what the chairs' significance was that led someone to place such plaques on their rails.  I'll let you know what I find out.

All photographs, except where noted, by Boy Fenwick
Posted by Reggie Darling at 9:43 AM