That Radish Is a Watermelon!

As I wrote in my last post, this past Saturday we visited the final Farmers' Market of the season in the town near Darlington House.  Included in the baskets of produce and foods that we came home with was an usually big, pale green radish that the farmer who sold it to Reggie called a Watermelon Radish. 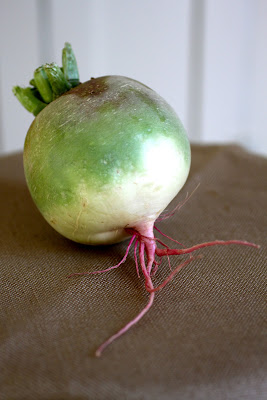 The radish was much larger than the typical red-skinned radish one sees in a grocery store, measuring a full three and a quarter inches across.  The farmer said that it is called a Watermelon Radish because its flesh is a lovely hot pink, like the flesh of the fruit after which it is named.  She also said that it was a mild variety, best eaten raw and with a bit of salt. 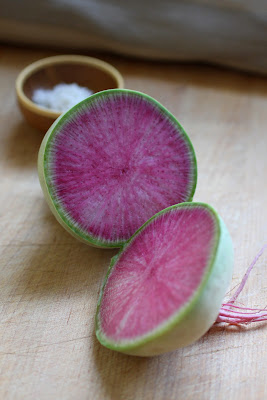 When I sliced open the radish I was delighted to find the flesh as the farmer had described it: a rich, rosy pink, reminiscent of the flesh of a watermelon. 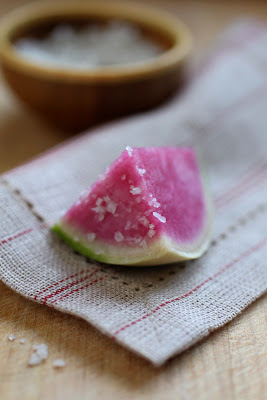 And it had a delicate, mild flavor to it, too, with only a hint of the pepperiness one associates with radishes.  Sprinkled with fleur de sel, it was wonderfully delicious.

Tell me, have you--like Reggie--been recently introduced to an heirloom variety fruit or vegetable for the first time?  If so, which one was it?

All photographs by Boy Fenwick
Posted by Reggie Darling at 9:39 PM