Several weeks ago, Reggie was the winning bidder at a country auction of two charming guaches of romantic landscapes.  Of diminutive size, they were painted in the first half of the nineteenth century and are likely French, at least to his eye.  If not French, they are most certainly Continental.


The two paintings Reggie acquired are shown in the foreground of the above photograph.  Although sold as a single lot, the pictures are not associated--not a pair, not by the same hand, and so on.  Reggie bought them because they are attractive, decorative, and nicely framed.  And he got them at a very reasonable price--less than the cost of a dinner for two in a nice restaurant in Manhattan. 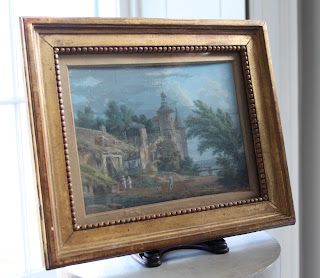 The first--and larger--of the two paintings is really quite well done.  It is a romantic landscape with picturesque tumbledown cottages, a castle with flags flying from its towers, and a body of water in the distance.  The painting includes rustic figures and a little dog joyously frisking about.  The artist (unsigned) deftly depicts the scene at the height of summer, with trees and climbing roses embracing the cottages.  It is a pleasing little picture, and I am glad to have it.  I also like the frame, which I suspect is original.  I date the painting to the mid-nineteenth century. 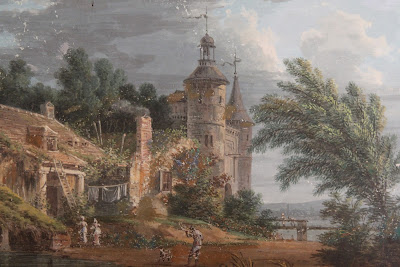 The painting has some minor losses to its surface, but I do not mind.  I'm not planning on sending it to a restorer, as I think it looks just fine as it is. 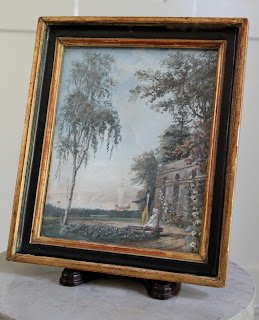 The second--and smaller--painting Reggie bought is also a romantic landscape.  It shows two figures in a garden overlooking a body of water, with a classical building (or is it a ruin?) and several boats at sail.  Judging by the clothing depicted, Reggie thinka the scene was painted in the 1820s or 30s, at the latest. 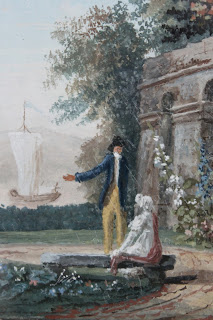 Not as finely executed as the other landscape, this little painting is still skillfully done.  It is clearly old and retains its original frame, and it is signed on the back by the artist (I suspect). 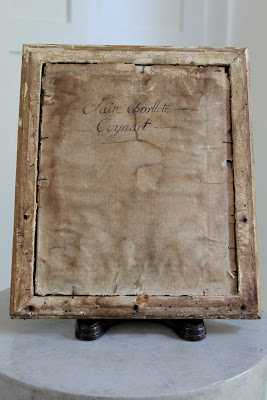 Claire Charlotte Coynart was a better painter than she was a calligrapher, given the crudenes of her signature.  Reggie suspects that she was Mademoiselle Coynart when she painted this pretty little picture, as he believes it is what many of us in America call "school-girl art," done by young ladies of refinement when still of a school age.  In the early nineteenth century in the United States, such young ladies as Mademoiselle Coynart were admired particularly for the needlework pictures they made--some of astonishing virtuosity--while students at the academies where they were educated. 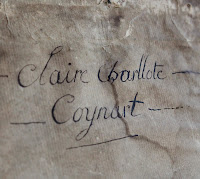 We currently have these little pictures, along with the English eighteenth-century oil portrait in small shown in the first photograph of this post, on easels on an early nineteenth-century New York pembroke table in our drawing room.  Reggie likes small paintings put about in such a manner, and this is not the only table in his house with such an arrangement.  He is always on the lookout for useful easels for such purpose and buys them when he finds them and when his budget allows for it.

Tell me, do you also display paintings on easels in your house?

Photographs by Boy Fenwick
Posted by Reggie Darling at 8:17 PM