The Ironstone of Darlington

Some of Reggie's readers may think that he only dines on the finest of antique china, eating his meals and drinking his tea from fragile porcelain vessels decorated with whisps of gilding and hand-painted flowers.  If so, then Reggie plans on giving you a bit of a jolt, since that isn't true.  Well, not mostly.  While one does have rather a lot of good porcelain and creamware, and one routinely sets one's tables with it, there is a more quotidian side to Reggie's dishes that gives him equal, if not at times greater, pleasure.


Today I share with you images of the platters, dishes, bowls, and serving pieces that we use in our kitchen and at our casually set tables, and which are the workhorses of the back-of-the-house activities that support the more refined requirements of the front of the house at Darlington.


They are made of what is known as ironstone, a type of stoneware china that was introduced in England in the early nineteenth century by potters looking for a substitute for porcelain that could be mass-produced and sold to a broad market.  Dense and hard, glazed ironstone china was first patented in 1813 by Charles James Mason in Staffordshire, England.  It was an improved china that was harder than the earthenware offerings available at the time and stronger than more costly porcelains.  Durable and affordable, ironstone wares decorated with colorful patterns were an immediate success in England.


By the 1840s, undecorated—or white—ironstone china, was being mass-produced in England for export to Europe, Australia, and North America, where it remained popular in middle-class households for the next seventy years.  Until the late nineteenth century most dinnerware in the United States was imported.  After the Civil War dinnerware, including ironstone, was increasingly manufactured in America.  Residential use of ironstone fell out of favor in this country in the early twentieth century, when other lighter and more colorful alternatives arrived on the market.  Ironstone remains popular to this day for institutional and hospitality use, although it peaked there in the 1960s.

Originally given such names as graniteware, stoneware, pearl china, or feldspar china, the china I am referring to is now all categorized as "ironstone." 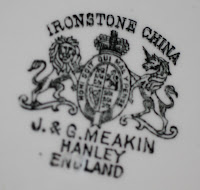 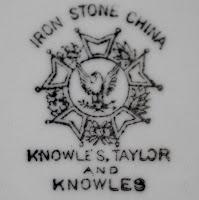 We have collected ironstone for as long as we have owned Darlington House, and we have amassed a rather large inventory of it.  We use it daily in our kitchen, mostly while preparing food and often for serving.  We have dozens of platters, from very large to tiny ones; we have footed compotes and serving dishes; we have bowls; we have jugs; and we have more.  We enjoy using our ironstone—I like the heft and hand of it, and I like the way it looks: honest and straightforward, true.  There's nothing fancy about it.


White ironstone patterns fall into distinct periods.  The earliest—called gothic or primary—date from the 1830s and 1840s and frequently includes paneled hexagonal or octagonal shapes.  More rounded forms emerged in the 1850s and 1860s, when exports to this country really took off, and huge quantities of it were sold to the American middle classes and in this country's farmlands where it was called "thrasher's ware," since much of it was decorated with harvest patterns of relief-molded sheaves of wheat and fruits and berries.


After 1860, bulbous, highly ornamented designs were introduced that combined ribs with leaves and flowers, and from 1880 onwards ironstone reverted to plainer forms—often unadorned except for handles or finials.  Most of the American-made ironstone dates from this period and has simpler shapes than found on English imports.


Almost all of the ironstone we own at Darlington House was made for residential use and dates from after the Civil War through around 1910.  I don't really care for the more bulbous and ornamented earlier designs, which can look rather ungainly and fussified to me.


Collecting white ironstone came to widespread popularity in America in the 1970s, and Reggie remembers many a photograph in shelter magazines of the time showing stripped pine Welsh dressers filled with it in the type of country interiors popularized by Mary Emmerling.  In the 1980s Perry Wolfman filled her marvelous store, Wolfman-Gold and Good Company, in Soho in New York City with it, and Reggie remembers spending delighted hours there enjoying seeing it in mass quantities, beautifully displayed.  Ironstone enjoyed another round of popularity in the 1990s, courtesy of Martha Stewart.  It has remained a popular and utilitarian collectible ever since.


Using ironstone is quite safe, as its glazes do not contain lead or other harmful elements.  It is not recommended that one put ironstone in the dishwasher, though, as the high heat and soaps used in such machines can damage it.  Discoloration can be removed or reduced by soaking ironstone in a bath of hydrogen peroxide for several days.  Contrary to what you might have heard, one should never use stonger chemicals on it—such as chlorine bleach—which can harm it.


Even though prices for good, clean pieces of antique ironstone have risen since Reggie first began collecting it over a decade ago, it is still possible to score pieces of ironstone for between twenty and fifty dollars.  Reggie has even had good luck finding odd pieces of it in junk shops and at yard sales, too.  But finding ironstone in such places is increasingly rare, and it is more likely that one will come across it at dealers asking seventy-five dollars to two hundred dollars per piece, sometimes more.


Reggie enjoys owning and using his ironstone, both in the kitchen and at the casual table.  If you do not yet own any of it, Dear Reader, Reggie encourages you to keep an eye out for it and buy it when you come across it at a good price.  You needn't live in a traditional interior such as Darlington House to enjoy using ironstone, either, as the plainer pieces that Reggie likes are suited for use in modern, clean-lined interiors, too.


Tell me, do you own and use ironstone in your house?

For additional information regarding ironstone, Reggie recommends consulting the excellent website of the White Iron Stone Association and the "potteries" sections of the website of the city of  Stoke-On-Trent, England, both of which were invaluable resources to him when researching this essay.


All photographs by Boy Fenwick
Posted by Reggie Darling at 2:35 AM