Our first stop at the New York Ceramics Fair was the booth of John Howard, a specialist dealer in Staffordshire, creamware, lustreware, and pearlware ceramics based in Oxfordshire, England.  We've bought from Mr. Howard at previous shows, and we always make a point of stopping by his booth at the Ceramics Fair because he usually has one or two pieces of pearlware that we are interested in.


So, what is pearlware, you might ask, and why would I consider collecting it, as I do?

Pearlware is a type of English creamware, made whiter by the inclusion of china clay, and covered with a glaze containing a small amount of cobalt that gives it a bluish cast.  The generally accepted view is that pearlware was invented by Josiah Wedgwood in 1779.  Sometimes called "Prattware," and originally called "china glazed" or "pearl white," it was produced in quantity by Wedgwood and other potteries, such as Enoch Wood & Sons, in England from 1780 to around 1820, and remained in production, albeit in declining levels, until around 1840.


Given when pearlware was produced, at the height of the neo-classical revival, much of it is classically inspired in its form and decoration, taking its aesthetic inspiration from ancient Rome and Greece.  We collect pearlware figures of neo-classical deities and the Christian virtues, made 1800-1820, and have a dozen or so of them at Darlington House.  The pearlware figures we collect were made for domestic consumption in the English markets, and relatively few of them were exported to America, unlike later Staffordshire figures.  It is relatively rare to find pearlware figures for sale here in the United States. 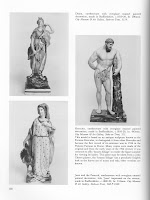 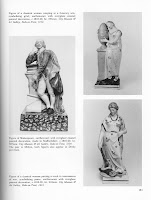 Two pages of pearlware figures, a number of which are in our collection at Darlington
from English Earthenware Figures, 1740-1840 by Pat Halfpenny
At John Howard's booth at the fair we came across a pearlware bust of the goddess Minerva, circa 1810-1820.  Standing a robust twelve inches tall, the bust has painted enamel overglaze decoration, meaning that it was first glazed and fired in an undecorated state, then paint-decorated, and then fired again.  Typical of such figures, the paint decoration is in pretty pastel colors.


The base of the bust is painted to resemble marble, and the figure wears plum and lavender colored classical robes and a slate colored helmet surmounted by plumes of russet feathers.  It is stamped (twice) as being the goddess Minerva, the Roman equivalent of the Greek goddess Athena, the goddess of wisdom, war, art, and commerce.  Minerva was the daughter of the god Jupiter, whose image appears on the bust's peacock blue colored breastplate.

Given the bust's substantial scale it was an expensive piece when originally produced and it is a costly rarity today.  Despite the hefty—although eminently fair—price quoted to us by Mr. Howard, we decided to take the plunge and buy it to add to our collection at Darlington House, where it sits as the jewel in the crown of our pearlware figures collection.

I think our Minerva is really rather marvelous, and I am thrilled we have her.

Next: A piece of Staffordshire of elephantine proportions . . .
Posted by Reggie Darling at 8:48 AM