My mother, known as MD, was not exactly what I would characterize as the maternal type.  She was the reverse of sentimental and wasn't one to mollycoddle her children, who—by the time I came around—were largely left to fend for themselves when their needs reached beyond the basics of food, shelter, and schooling—both academic and social.

There were others in our household who were there to greet us when we came home from school and who made sure that we had clean clothes to wear and hot food to eat, but they were employed to do so.  As I have written elsewhere, MD was more interested in pursuing her own interests—primarily her charitable pursuits, smoking cigarettes, and reading novels—than she was in taking care of the more mundane aspects of childcare.  Fortunately, she didn't have to.  As a little boy I spent more time in the care of the woman employed by my parents to look after us (and who they named me after in gratitude for doing so) than I did with my own mother. 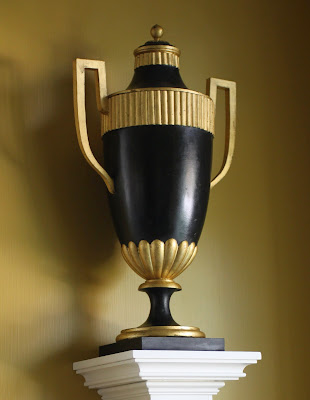 MD took a laisez-faire, sink-or-swim approach in raising her children.  Rather than bundling us up in coats and mittens during the winter to go outside and play she would let us go out wearing whatever, assuming (quite reasonably, actually) that we'd come back in for a coat if we got cold.  She didn't get involved in our little activities much, such as music lessons or dancing school, beyond ensuring that we were transported to and from where we had to go, and she categorically refused to help us with our homework from school, since, as she explained, it was our homework, not hers.

When confronted with a childhood disappointment or injustice, MD would listen to us and consider what we had to say, but more often than not her response would be "Get over it!" or "Welcome to the human race, kiddo."  One time, for instance, when I was taking riding lessons, I remember that she was more concerned for the horse than she was with me when I had been thrown off its back three or four times during the lesson.  "You must have been doing something to make him want to throw you," she said.  And while it seemed shockingly cold-hearted to me at the time, in retrospect she was probably right, since I had spent much of the lesson forcing the horse to walk through the puddles of water in the ring rather than around them.


Although I would have preferred a more nurturing type of mother growing up, and devoted half a dozen well-spent years in therapy working my way through and around such issues as a result, I was genuinely fond of MD and came to appreciate the positive qualities that she had, which she passed on to her children.  She was keenly aware that we lived a life of privilege and made sure that we did not take it for granted, nor did she allow us to believe ourselves superior to those who were not as fortunate as we were.  She demanded that we treat everyone with respect and good manners, regardless of whether they were of lofty birth or low.  She also had a remarkably wry, sardonic sense of humor that—although unpleasant at times to be the butt of it—could be extremely funny.  While there were periods in my twenties and early thirties when MD and I didn't speak much, some of which lasted several years or more, we buried whatever hatchets we had by the time I reached my latter thirties when she and I both succeeded in developing a mostly mutually satisfying relationship that lasted until she died, ten or so years ago.
MD willed her body to science with the instructions that her remains were to be cremated and her ashes delivered to her children to do with what they will.  My brother Frecky was the one who received the ashes, and with Frecky they remained until about a year ago, when he contacted me and my sisters with the news that he was going to divide MD's ashes in quarters so that each of us could have some.  Several weeks later, a package arrived in the mail containing a Ziploc bag of a portion of MD's ashes.
"What on Earth am I going to do with these?" I wondered.
I knew that MD would have rolled her eyes and snorted if I had asked her where she would like her ashes spread, since she didn't go in for that "sentimental sort of crap," as she would have said.  Besides, no place to spread her ashes came to my mind that had any emotional significance, for me or for her.  I wasn't exactly inclined to make a trip to the assisted living center where she spent the last fifteen years of her life to scatter her remains.  I couldn't bring myself to put them in the trash, either.
So I decided to do what I usually do when confronted with a particularly vexing, emotionally loaded question, which is to think about it some other day (another lesson that I learned from MD).  I put the Ziploc bag of ashes back in the box Frecky mailed it in and put it in a drawer in the desk in the Snuggery at Darlington House.
Several weeks later, when lying awake in bed one night, I realized that I had the perfect place to put MD's ashes.  Not only was it close to home, but it was a place where I would come into contact with them on an almost daily basis, as a reminder of my dear departed mother.
In our dining room at Darlington we have a pair of French early nineteenth-century tole urns supported by brackets mounted on the walls.  They are handsome and decorative, and they add a certain glamour to the room.  "Why not put MD's ashes in one of those urns?" I asked myself.  It seemed like the ideal place for them and a much better placement of them than if I had mooned about and scattered them in a stream or on a mountainside where MD had never been.  I knew that she would have appreciated the macabre humor of having her ashes stored in an urn in my dining room.  She would also have enjoyed knowing that I would from time to time raise my glass, turn to the urn, and offer MD a toast, particularly if I did so in front of startled guests sitting at the same table.
And what better a day to toast one's dear mother, I ask, than today, commonly known as Mother's Day and which I shall always think of hereafter as MD Day?
Happy MD Day, Mummy Darling.

Photograph by Boy Fenwick
Posted by Reggie Darling at 1:55 PM