In this post, the second in the series, I reflect on how much had changed in the thirty five years that separated my own Yale 25th reunion from my father's.


Yale Class of 1979 25th Reunion
Although FD's Yale classmates were almost entirely made up of WASPs, after WWII the face of Yale’s undergraduates started to change.  Slowly at first, and aided by the G.I. Bill, Yale’s student body began to become more diverse.  By the time I entered Yale in September 1975 it was a very different place from the university my father had enrolled in.  For one thing, Yale had gone co-ed in the fall of 1969 and by the time I matriculated 40% of my classmates were female.  In addition, a substantial percentage of my Yale class were people of differing ethnic and religious backgrounds from my WASP origins, and the majority of undergraduates there had attended public schools. 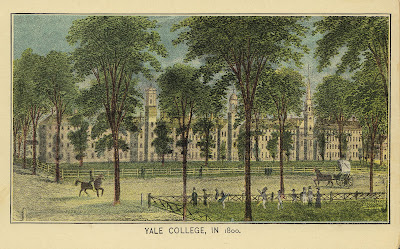 While being a legacy offspring and a prep school graduate was certainly not a liability to getting admitted to Yale when I applied, it was no longer the easy ticket for admission that it had been in my father's day.  In other words, Yale had become a meritocracy.  But Yale remained, and remains to this day, a very macho, competitive, and elite university.  Today, however, these defining characteristics of the university have nothing to do with the ethnicity or religion or gender of its students, unlike when my father went there when its doors were tightly closed to anyone who didn’t fit a very narrowly-defined vision of who should be admitted.  I loved my experience at Yale, and I look back on it fondly and with respect.  I feel fortunate to have been able to go there.


One of the things that has changed since I was an undergraduate at Yale is that the stigma of being gay in this country has largely dissipated in the intervening years, at least among sophisticated, educated people, and had long since become a non-issue among my classmates by the time of my 25th reunion, held in June 2004.

But when I was an undergraduate at Yale in the second half of the 1970s, being gay was still stigmatized to a degree that would be unfathomable today, at least here in America.  Even though Yale had become known by then as politically liberal (a reputation that enraged many of its conservative alumni), it was not yet acceptable to be gay in the social and athletic circles I ran in at Yale, and many of us callow youths there so inclined weren't brave enough to publicly admit our true orientation as undergraduates.  Sure, there were a couple of out militant lesbians and extremist gays on campus, but they were marginalized exceptions, and were most definitely not found among the campus leaders whose ranks I aspired to join one day, and eventually did.


While I (discretely) came out to a few of my closest friends during my senior year at Yale, it was not until half a decade or more after graduating from Yale that I finally fully accepted myself as a gay man, and closed the door—once and for all—on thinking that a life with and marriage to a woman was a possibility, however remote, for me.

It was not until my 20th reunion at Yale that I brought one of my partners with me back to New Haven, when I brought Boy Fenwick, my partner in life (and more recently my legally recognized spouse, at least in Massachusetts where we got married two years ago) with me.  While some of my classmates were slightly taken aback when I first introduced Boy to them at my 20th reunion, they rallied immediately.  And when he joined me at my 25th reunion, no one batted an eye.  I had a marvelous time at my Yale 25th, and having Boy there with me by my side was an important part of what made the experience memorable for me.


Needless to say, that would not have been the case for any of my father’s classmates who would have had the audacity to do such a thing at their 25th reunion in 1969, where they would likely have been met with disapproving astonishment at such an introduction, and where the offending classmate and his partner would have been ostracized, if not asked to leave immediately.


I'm glad that I graduated from Yale at such a time that I was not subjected to this type of treatment at my 25th reunion.


I'm also glad that I came of age in America when it had become possible in the world I come from to publicly admit to being gay without the fear of complete and utter ostracism.  I am not sure that I would have been able to admit to myself that I was gay if I had been in the class of 1944 at Yale, considering the way of the world back then.  Given who I am and the background I come from, I believe I would have done the expected thing then and gotten married to a nice girl from a similar background and had a family, as many gay men of that generation did.  But I would have always known, at least subconsciously, that I had chosen to do something that did not come naturally to me.  I also believe that it wouldn't have been fair to the woman I married, because I would not have been able to truly love her with the passion such a union deserves.  Fortunately, through advances since then I did not feel compelled to pursue that path—unlike I am sure a number of my father's Yale classmates . . .


I must admit, though, being gay hasn't exactly always been a cake walk for me, and it certainly isn't something that I would have chosen had I been given a choice in the matter.  But I wasn't, and so I have made the best of it as far as I have been able to.


With a clear conscience.


All Yale postcards from Reggie's personal collection
Posted by Reggie Darling at 8:48 AM