As I have written in past posts, one of the (many) things we collect at Darlington House is early-nineteenth-century pearlware figures of deities and virtues.  Made in Staffordshire, England, from 1790 to 1825 or so, the figures, which are almost all dressed in classically inspired garments fashionable at the time, were largely intended for the domestic English market, and relatively few of them were exported to the Americas.
We have been collecting such pearlware figures for as long as we have owned Darlington House, and we keep a determined eye out for them whenever we visit antiques shops, antiques shows, and auction houses.  As readers of this blog well know, we frequent such places rather a lot, and doing so is one of our favorite pastimes.
But we only rarely come across these figures.  Although we see mountains of later, Victorian-era Staffordshire figures whenever we are out and about, the earlier classical figures seem as rare as hens' teeth here in the American northeast.   We go to a lot of shows and visit a lot of dealers and shops, but we probably only come across one or two—maybe three—examples in the course of a year.  And when we do, we more often than not already own a version of that figure.
Several weeks ago, when out in the town near Darlington where we do much of our shopping, Boy came across a pearlware figure that we did not already own, in perfect condition, in the shop of pickers where we have had much good luck over the years. 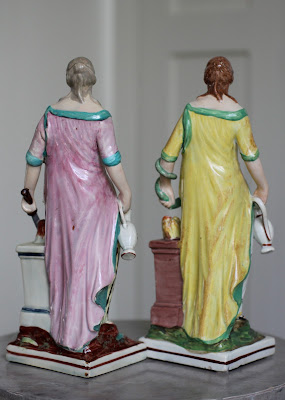 The figure had just come into the shop—a lucky find by the owners at a recent Brimfield Fair—and was exceedingly well-priced.  So, without so much as a hesitation, Boy bought her. 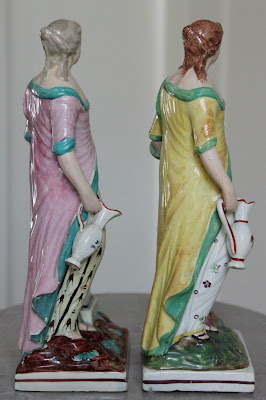 As we were sitting in the car examining our new purchase, both Boy and I thought the figure in front of us looked oddly familiar.  That's not surprising, though, since we probably own upwards of twenty of them, representing various goddesses, deities, and virtues.  The figures are all approximately the same height, decorated similarly in pretty pastel colors, and almost all of ours are women (we call them "the Girls").  Only relatively few of such figures depict men or boys, we have found. 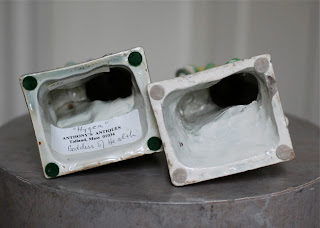 It was not until we got back to Darlington House with our new figure that Boy realized that we already owned a figure that was almost identical to the figure he had just bought.  They both depict Hygieia, the Greek and Roman goddess of good health, cleanliness, and sanitation, and who was the daughter of Asclepius, the god of medicine.

The figure we already had in our collection carries a label from the dealer we bought her from ten or so years ago that identifies her as Hygieia, and we never had any reason to suspect that such an attribution may not be accurate.  But when comparing the two figures we noticed that they were decorated differently, in different colors and patterns, and had a minor—albeit significant—difference to their modeling.  But it was clear to us that the bases and bodies of both figures were made from the identical mold, and were—but for some minor variations—the same, although likely painted at different times by different people working in the same factory. 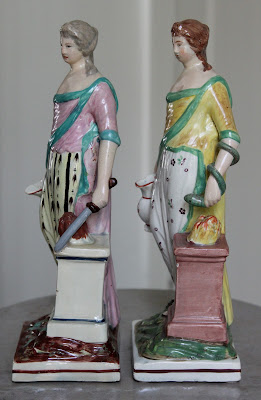 In examining the primary differences between the two figures—what they are carrying in their left hands—I am now not so sure that the figure that was already in our collection actually does depict Hygieia, even though it is the one marked with a label identifying her as such (seen in the photograph of the inside of the figures).   Hygieia, I have since learned, is typically shown carrying a snake, which the figure shown on the right (our "new" one) does.  The figure on the left (our "old" one), however, is shown carrying a sword, which is not typically associated with the goddess Hygieia.  Furthermore, she does not have the flaming bowl on the top of her pedestal that Hygieia has, frequently seen in depictions of her.  Consequently, I am now not so sure that these figures are supposed to represent the same goddess at all.  I now suspect that the one shown with the sword (our "old" one) is meant to depict another goddess entirely (could it be Athena?  Or the more obscure Enyo?), and was adapted from the mold originally made for Hygieia, but altered with different accessories (which were applied separately to the molded figure before firing) and painted differently as well.


Regardless of whether the figures are of one and the same goddess, or not, I'm delighted to have them both in our collection at Darlington House, and most pleased that Boy spotted the newest addition when he did.

Tell me, Dear Reader, do you think they are both Hygieia?  If not, who do you think the goddess with the sword is supposed to depict?
Posted by Reggie Darling at 2:53 PM