As some of my readers may recall, this past January I chanced upon a porcelain figure of a white leopard (or is it a white cheetah?) at an antiques show during New York Antiques Week.  I bought the figure because—in addition to liking it (my primary reason for buying it)—its form was nearly identical to one of a lioness that I already owned, purchased when I was still in my twenties.  Although both of these diminutive porcelain great cats (they measure a mere four-and-a-half inches long) appeared to me to have been made from the same mold, they are decorated differently: one is painted as a white and black leopard (or cheetah) and the other as a tawny lioness.  There was no question in my mind when I chanced upon the figure of the leopard/cheetah at the show—I had to have it! 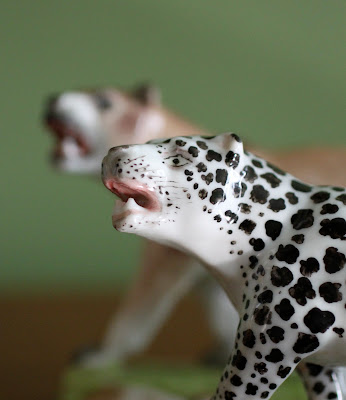 Upon close examination and side-by-side comparison of the figures once I brought my leopard/cheetah home, I determined that my latest acquisition was made from a near-identical mold to the lioness, albeit slightly cruder in its crispness, and the quality of the figure's painted decoration—while charming—is not as refined as that of the lioness.  I deduce, therefore, that the lioness is most likely an earlier example made during the figure's first period of production, the latter eighteenth century, and the leopard/cheetah is later, likely produced sometime in the first half of the nineteenth century. 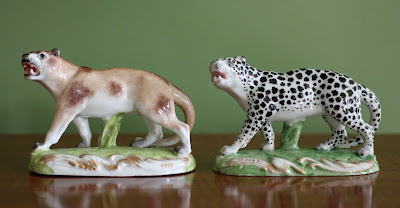 I believe both of the figures are Continental, and probably German.  Neither are marked.  As was the case with many figures originally produced in the eighteenth century, popular ones were often produced (or outright copied) over and over again, long after their initial production.  This, I believe, is the case with the leopard/cheetah. 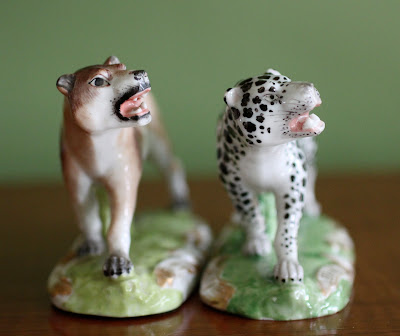 You can see that the lioness is a superior figure to the leopard/cheetah by comparing their heads in the preceding photograph.  The lioness' modeling (and painted decoration) is clearly finer and more carefully done. 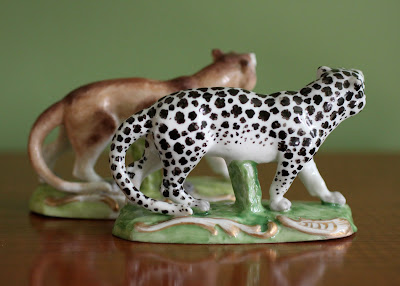 But this does not mean I am unhappy with my white leopard/cheetah figure, Dear Reader.  No, not at all!  I find it to be a very handsome figure, indeed, and I am quite happy to have it.  It is just not quite up to the quality of the earlier lioness . . .


Some of my more perspicacious readers may recall that this is not the first essay I have posted about a nearly identical pair of figures in our collection.  I published a related story a year or so ago about a near-pair of early Staffordshire pearlware figures of goddesses in classical dress, circa 1800-1815.

It was only after we brought home the figure of the goddess shown on the left in the preceding photograph that we realized it was made from the same mold as one we already possessed (albeit slightly modified), shown on the right.  What a happy coincidence that was!

In addition to owning the near-pair of cats and goddesses featured in this post we have several more examples of nearly identical figures in our collection at Darlington House, that we have serendipitously united over the years.  I look forward to posting additional essays about their stories here over time.

Tell me, Dear Reader, have you ever bought something and brought it home with you only to find you already own an example of it?

Photographs by Boy Fenwick
Posted by Reggie Darling at 9:54 PM