Reggie has what some people refer to as a Holiday Sweater.  No, Dear Reader, he doesn't own one of those awful, lurid acrylic ones—covered with images of cheery Santas, candy canes, wrapped packages, and reindeer—favored by mittelklassen women of a certain age or worn ironically by post-collegians to Ugly Christmas Sweater parties.


Reggie's sweater is an authentic, classic wool Norwegian one made by Dale of Norway.  It is not a holiday sweater at all, but rather a sweater made to be worn during the winter, ideally while the wearer is engaged in an athletic outdoor activity, such as skiing.


Dale has been making sweaters and other knitted garments since 1879 and is the best source today for traditional Norwegian sweaters, as far as Reggie knows.

Dale is named after Norway's Dale River, where the company's factory sits and where it still makes its sweaters to this day.  Dale takes great pride, and rightfully so, that its sweaters are—and always will be—Norwegian-made, versus farmed out to a factory in China.

Dale is correctly pronounced Dah-leh, and not Dail, as Reggie used to pronounce it until he was corrected by a Norwegian woman who laughed out loud when she heard him bungle the pronunciation of the company's name.  Needless to say, he never made that mistake again.


Reggie has been a fan of Norwegian sweaters for many years.  He got his first one—the classic Norwegian fisherman's sweater from L.L. Bean—when he was a student at Saint Grottlesex.

Reggie always hankered after a traditional Norwegian ski sweater with a knitted design spread across the shoulders.  He admired similar sweaters worn by his classmates at Saint Grottlesex and at Yale.


It was only ten or so years ago, though, that Reggie stepped up and bought the beautifully made, intricately knitted Norwegian sweater shown in the photographs at the outset of this essay.  He bought his from Gorsuch, which has stores in Vail and Aspen, Colorado.


Reggie is a fan of traditional, "native" clothing, especially garb from Scandinavia and Germany.  When he was a little boy in the 1960s, Reggie owned and wore a set of lederhosen that his father bought for him (along with a set for his brother, Frecky) on a trip to Germany.


One of Reggie's most treasured possessions is a Tyrolean hat, complete with all the trimmings, that he bought on a ski vacation in Cortina, Italy, a decade ago.  He plans on featuring it in an upcoming post.


One of Reggie's regrets is that he no longer owns an authentic, vintage Loden jacket that he bought twenty or so years ago, only to give it away shortly thereafter in a fit of temporary insanity when purging his wardrobe.  Ah, well.


Reggie's Norwegian sweater was made by Dale to commemorate the 2002 Olympic Games held in Salt Lake City, Utah.  Dale has been making sweaters for Olympic teams since the 1940s.  It was only in writing this post that Reggie realized that his sweater features an image of the Mormon Temple in Salt Lake City in its knitted design, right below the sweater's zipper! 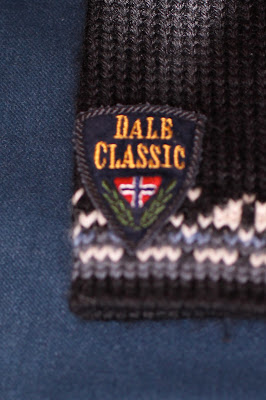 At first it made Reggie somewhat uncomfortable that his sweater incorporated an image of the Mormon Temple.  But once he thought about it for a while, he actually liked it.  He now appreciates the somewhat bizarre humor of owning a traditional, classic Norwegian sweater that incorporates such an image; the fact that it does so does not detract from his pleasure in owning the sweater one bit.

Tell me, Dear Reader, do you have any traditional "native" clothing in your wardrobe?  If so, what kind?

Photographs of Reggie's sweater by himself
Posted by Reggie Darling at 9:52 AM