No, Dear Reader, this is not a photograph of a sandy seashore covered with seashells. 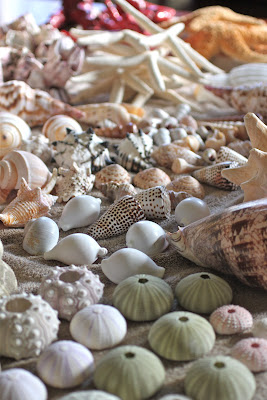 Rather, it is a photograph of a towel, spread out on our dining room table at Darlington House, covered with the shells that once occupied our Shell Mania mantel display, the subject of an earlier post of mine.

Now that Christmas is fast approaching, we are beginning to ready Darlington House for the holiday.  That meant that this summer's Shell Mania decoration needed to be, well, swept away to make room for more seasonal embellishments. 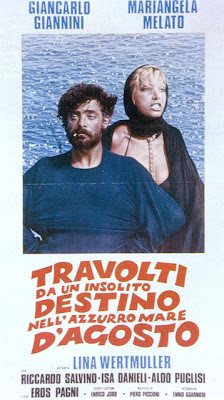 Which reminds me of one of my favorite films, Lina Wertmüller's Travolti da un Insolito nell' Azurro Mare s'Agosto, which loosely translates into English as "Destiny in the Blue Sea of August" (it was distributed in this country as Swept Away).  It is a marvelously amusing and sexy movie about an insufferable, spoiled, rich Italian woman (played to perfection by Mariangela Melato) whose Mediterranean yachting vacation takes an unexpected turn when she and one of the boat's crew become stranded on a desert island, and their roles are deliciously and hilariously reversed.  Do yourself a favor, Dear Reader, and rent it (or download it) in the original Italian language version with subtitles, and not a dubbed version (and certainly not Madonna's disastrous remake thirty years later).  Ms. Melato's performance in Swept Away is absolutely divine, and much of the pleasure of watching the film is listening to her non-stop complaining, snarling, shrieking, and—ultimately—purring as she first reviles and then falls helplessly in love with the character played by Giancarlo Giannini.

For those of Reggie's readers who may now be longing more for sandy shores than sleigh bells, he highly recommends it.  He is confident that you, too, will be swept away . . .

Photograph of shells by Boy Fenwick
Posted by Reggie Darling at 3:23 PM