Sotheby's Americana Preview
The next stop on our auction house preview perambulation was at Sotheby's on the Upper East Side. 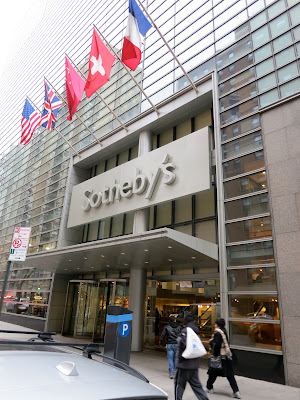 Sotheby's has a lot more on display in their showrooms this Antiques Week than Christie's does.  In my experience, these two major auction houses trade places every other year or so in bringing in the most Americana to sell during Antiques Week.  This year it was clearly Sotheby's turn to shine.

When one enters the exhibition rooms at Sotheby's one is confronted by a monumental Federal-era clock attributed to Simon Willard (1753-1848), as seen in the following photograph.  The clock's case is thought to have been carved by none other than the master carver Samuel McIntire (1757-1811).  Even though the clock's face appears to be rather over-restored, at least to this writer's eye, it didn't detract from the timepiece's magnificence one bit.  A nearly identical one is in the collection of the White House, in Washington, D.C..


I was rather taken with this pencil and wash drawing of Mount Vernon by Benjamin Henry Latrobe (1765-1820).  It once hung at Mount Vernon (it was a gift of the artist to George Washington the year before he died) and really should be returned there, I think.  I hope the good ladies of the Mount Vernon Ladies Association are feeling flush these days and will find their way to returning the drawing to where it belongs, on the banks of the Potomac River. 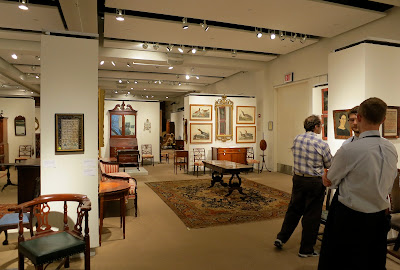 There were any number of Audubon prints in the Sotheby's sale, four of which can be seen in the preceding photograph.  I'm often amazed at the prices such prints go for, with very rare ones sometimes selling in excess of $100,000.


I confess that I was more taken by an assembled collection of early 19th-century gouaches of scenes in Italy.  I particularly like the pair of paintings in the upper middle of the preceding photograph, depicting the watery interior of Grotto Azzurra in Capri (estimated $5,000 to $10,000 for the pair).


The Sotheby's sale includes some outstanding chairs attributed to the Seymours of Boston.  The chair shown here is one of a pair, although they are being sold separately.


Personally, I prefer the much more reasonably estimated chairs in the sale attributed to Duncan Phyfe, which were once owned by Berry Tracy, the former curator of the American Wing at the Metropolitan Museum of Art.  The chair shown above, also one of a pair, has the very desirable hairy paw feet that pushes prices for Phyfe chairs (and furniture in general) through the roof, and justifiably so—as they are killer.  These Phyfe chairs are estimated to sell for a mere $5,000 and $15,000 for the pair (a bargain relative to the Seymour chairs, in my view).  Even though Darlington House is packed to the gills these days, I'm sure I could find a place for the Phyfe chairs, at least if I really had to . . .


In addition to examples of best-quality furniture made by name-brand cabinetmakers, the Sotheby's sale includes lots of good, hearty, unlabeled, unattributed, and handsome furniture that would make any homeowner proud.


Much of the furniture on display is estimated to sell for reasonable prices, considering its quality and rarity.  And what a value it is in today's markets, where mass-produced mid-20th-century options frequently cost substantially more!  These days, antiques are really quite reasonable, indeed.


What one will not find at a bargain basement price, though, is this superb example of a French gilt bronze Washington clock made for the American market, which Reggie would be more than happy to own should he have the extra jack required to cover the hammer price it is expected to go for.  I suspect the clock—a trophy piece if there ever is one—will go for well above the estimate when the hammer falls.


I was intrigued to see an excellent assortment of American Gothic Revival furniture at the Sotheby's preview.  It almost made me want to go out and buy an Alexander Jackson Davis (1803-1892) designed villa along the Hudson River to furnish.  I wonder . . . is that my life's next challenge?


The Sotheby's sale has cases and cases of silver holloware, stemware, and presentation pieces.  Do you really believe no one wants silver any more?  The estimates were sufficiently high, in my view, to indicate that Sotheby's believes there are still serious collectors out there who would like to own it.


I was interested to see there are a number of lots in the Sotheby's sale consigned by the Brooke Astor estate.  Disposing of the mother lode of Mrs. Astor's silver, china, crystal, furniture, jewelry, art, etc.,  has taken many, many months and any number of auction houses to effect.  I wonder, is this the last of it?


I believe these wine glasses may have once graced the table on Vincent Astor's yacht Nourmahal.  For but a few thousand dollars they, too, can grace your dining room table.

Next: A Visit to the New York Ceramics Fair