Reggie Out & About: Cocktail Preview Party at Cove Landing

Well, Dear Reader, it has been rather a long time since I've posted an "Out & About" story here on Reggie Darling.  While I've most decidedly been running around Manhattan and its environs these last several months attending this and that, nothing has excited me to actually sit down and (so to speak) take pen to paper to report on it.  That is, until now. . . 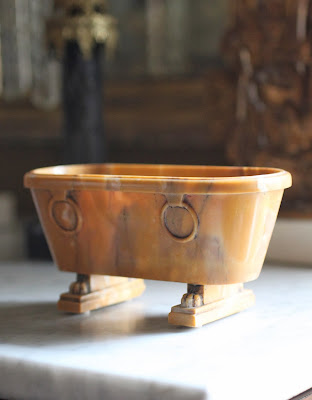 The other evening Boy and I attended a cocktail party hosted by Mr. Angus Wilkie, the celebrated antiquarian and proprietor of Cove Landing, formerly of Upper Lexington Avenue.  The party was held to preview Mr. Wilkie's autumn exhibition sale of precious agate, marble, and hardstone objects, cleverly titled "Stoned."


The exhibition sale was held in the galleries at W. M. Brady & Co., in a smart townhouse on a smart street on New York's Upper East Side, just steps off Fifth Avenue. 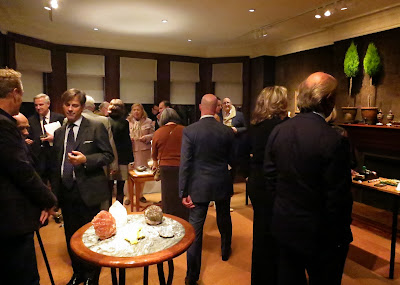 The party was attended by a swell, well-dressed set of New Yorkers drawn from the museum, auction house, and decorating worlds.  That, along with a smattering of investment bankers and assorted collectors, including yours truly.


The objects on display were all made of semi-precious or rare stone (hence the name "Stoned") and were mouth-wateringly covetable.


The exhibition was assembled by Mr. Angus Wilkie, the debonair owner of Cove Landing, who is known for his exceptional eye, honed by a lifetime spent in the loftiest levels of the antiques and auction house worlds.  He wrote one of the earliest—and most definitive—books on Biedermeier when he was but a tow-headed youth in his twenties. 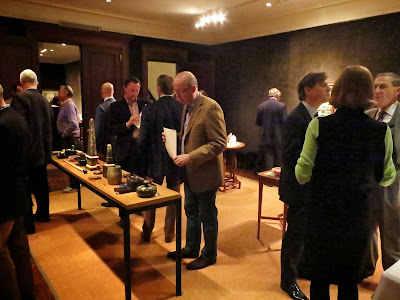 There was lots to see and admire at the Cove Landing cocktail party, including both objets and those attending the party.


I was particularly enamored with the pair of early-nineteenth-century English Blue John urns shown in the preceding photograph.  They excited a lot of admiration among the assembled guests.  I think they would look perfect on the mantel in our drawing room at Darlington House.  Alas, this will not come to be as their purchase price, while exceedingly fair given their rarity, was a tad high for Reggie's pocketbook.


I also admired this nineteenth-century Italian carved marble wall placque of the Emperor Tiberius, formerly in the collection of Bill Blass.  I learned from one of the other guests, Michael Baldridge, during the party that Tiberius was a nasty piece of work, indeed.  However, such knowledge did not detract from my pleasure in seeing the piece, which I thought very handsome. 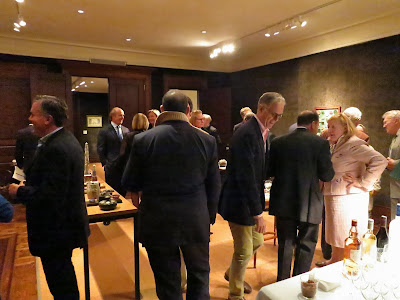 As I wrote above, the party was attended by guests drawn from the arts (both decorative and fine) and museum worlds.  The decorator Todd Gribben can be seen on the left in the above photograph, and Sarah Coffin of the Cooper-Hewitt can be seen on the far right.  Both Todd and Sarah have houses near us in the country.  Boy and I spent a week in a farmhouse in Tuscany with Sarah and her husband, Tom (seen on the extreme right of the photograph), a number of years ago.  Sarah's uncle, the Reverend William Sloane Coffin, wrote my prep-school letters of recommendation. 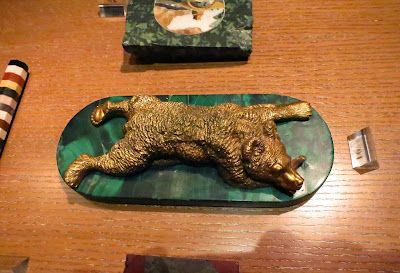 I admired this little late-nineteenth-century Russian gilt-bronze bear sprawled on a malachite base.  He was most appealing. 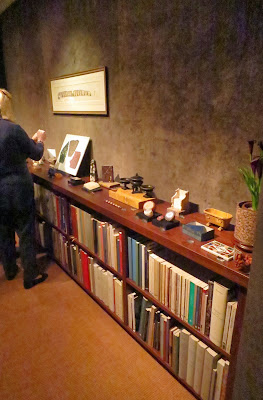 In addition to the main gallery room at W. M. Brady & Co., Cove Landing's exhibition extends into a smaller adjoining room that was set up as a cabinet of curiosities . . . of sorts. 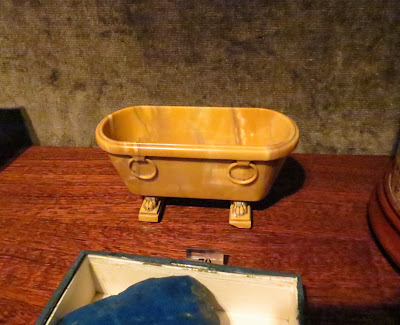 I particularly liked this little nineteenth-century Italian Siena marble Roman tub, raised on carved paw feet.  I liked it so much, in fact, that I bought it.  It can be seen in the photograph at the outset of this essay, Dear Reader, sitting on a pier table in our Snuggery at Darlington House.  I'm very happy to have it. 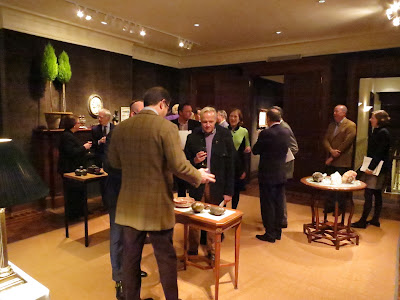 In addition to offering decorative stone objets, Cove Landing is also selling a selection of handsome furniture and framed works of art. 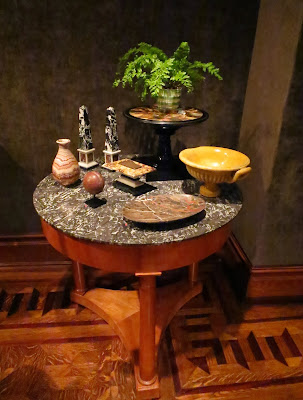 The South German Biedermeier cherrywood center table shown in the preceding photograph has its original dished variegated gray marble top.  It's the perfect setting for the stone objets displayed upon it, don't you think?


While at the Cove Landing party I was pleased to meet and speak with Ms. Laura Bennett, Director of W. M. Brady & Co.  She was very nice, and good-naturedly put up with me asking if she was related to the Bennets of Pride and Prejudice.  She said that she isn't, with a smile. 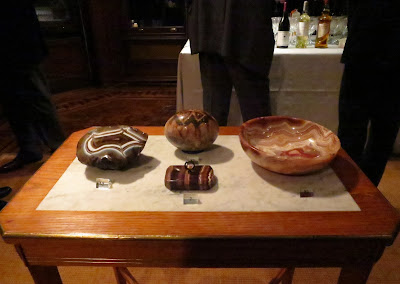 A stone-inlaid table, holding a collection of polished stone desirables. 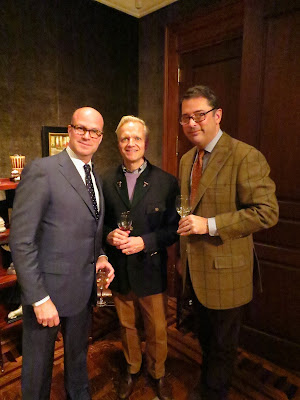 Here's a photograph of Boy standing with the decorators Robert Lindgren and Tom Gibb.  I first met the charming Mr. Gibb around thirty years ago, when we were both just starting out in New York. 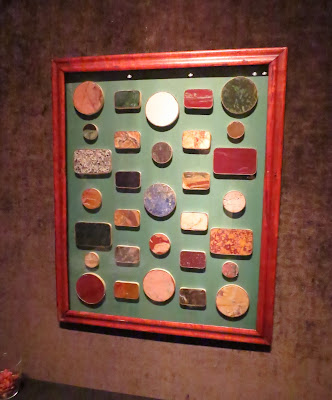 I thought this framed collection of nineteenth-century Italian sliced marble samples mounted on board was very attractive. 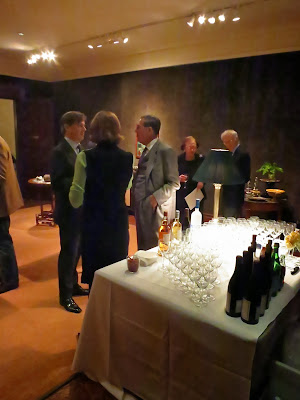 Guests at the Cove Landing party did not want for cocktails.  That's Mr. Phillippe de Montebello, the former head of the Metropolitan Museum, that you see standing in front of the table, wearing the light gray suit. 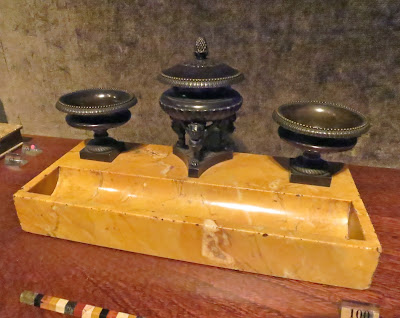 What desk wouldn't benefit from this elegant and severe English desk stand made of Siena marble and bronze mounts, circa 1810? 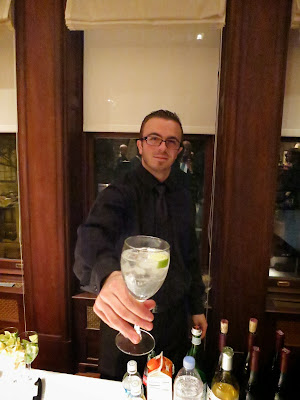 "Why, yes, I will have another cocktail, thank you!" 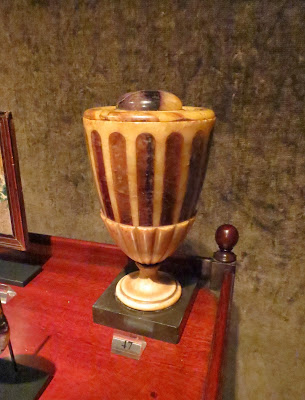 Boy and I briefly considered buying this George III alabaster and Blue John lidded urn mounted on a black marble base.  We opted not to, though, given that we had already committed to buying the little Siena marble tub. 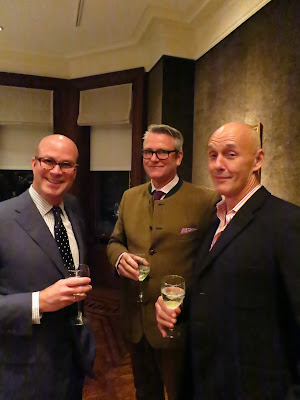 While at the party we met and spoke with the decorator Tom Scheerer and his partner Michael Balding. Mr. Balding and I had a particularly amusing conversation, and he was the one who told me just how nasty the Emperor Tiberius (supposedly) was.  It was only after leaving the party that I realized Mr. Scheerer is the decorator who redid the public rooms at the Lyford Cay Club, which he did to perfection, in my view. 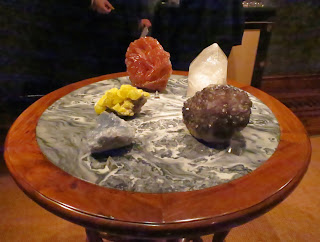 In addition to stone objets, Cove Landing also has a selection of beautiful rock crystals on display.  They, too, can be yours. 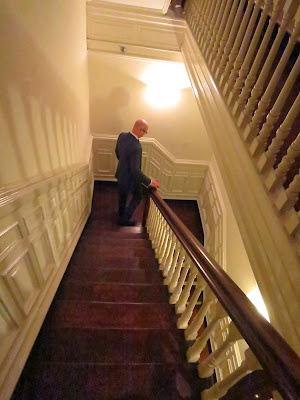 Realizing that we were—once again—among the remaining few guests at a party, Boy and I gathered ourselves together and bid our adieus and exited down the townhouse's somewhat treacherous (well, at least it was after several drinks) staircase and headed out into the late October night . . . 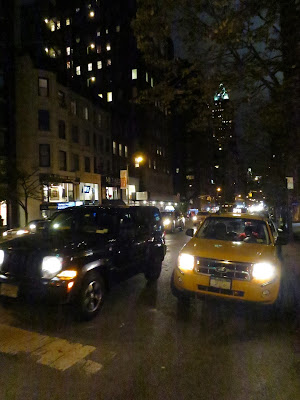 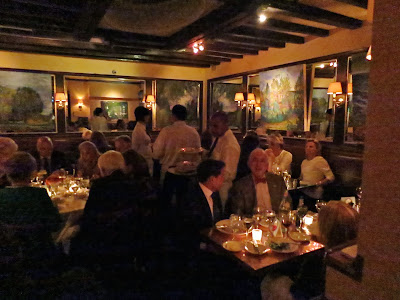 . . . and sped over to Swifty's for dinner.  As I have reported here on Reggie, Swifty's is one of our favorite "go-to" restaurants on the UES.  Mr. Robert Caravaggi, the restaurant's co-owner, kindly gave us the sole remaining table, even though we arrived there on a busy night without a reservation.  Swifty's was the perfect place to wind up after our very pleasant evening at the Cove Landing cocktail preview party. 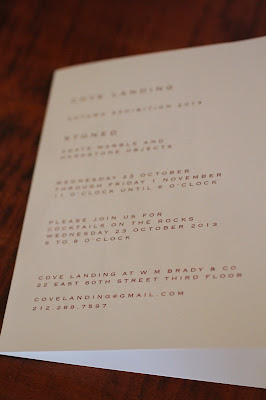 For those of you who are fortunate to be in New York City this week, Reggie highly encourages you to visit Cove Landing's autumn sale.  But you'd better hurry, though, as it closes on Friday, November 1, and I expect that it will sell out soon (if it hasn't already).  Oh, and please tell them that Reggie sent you!

Labels: antiques, collecting, drink, notable people, out and about, shopping