Tuesday evening marked the official beginning of the 2014 New York Antiques Week with the opening party of the New York Ceramics Fair and the arrival of a massive snowstorm that brought the city to a standstill. 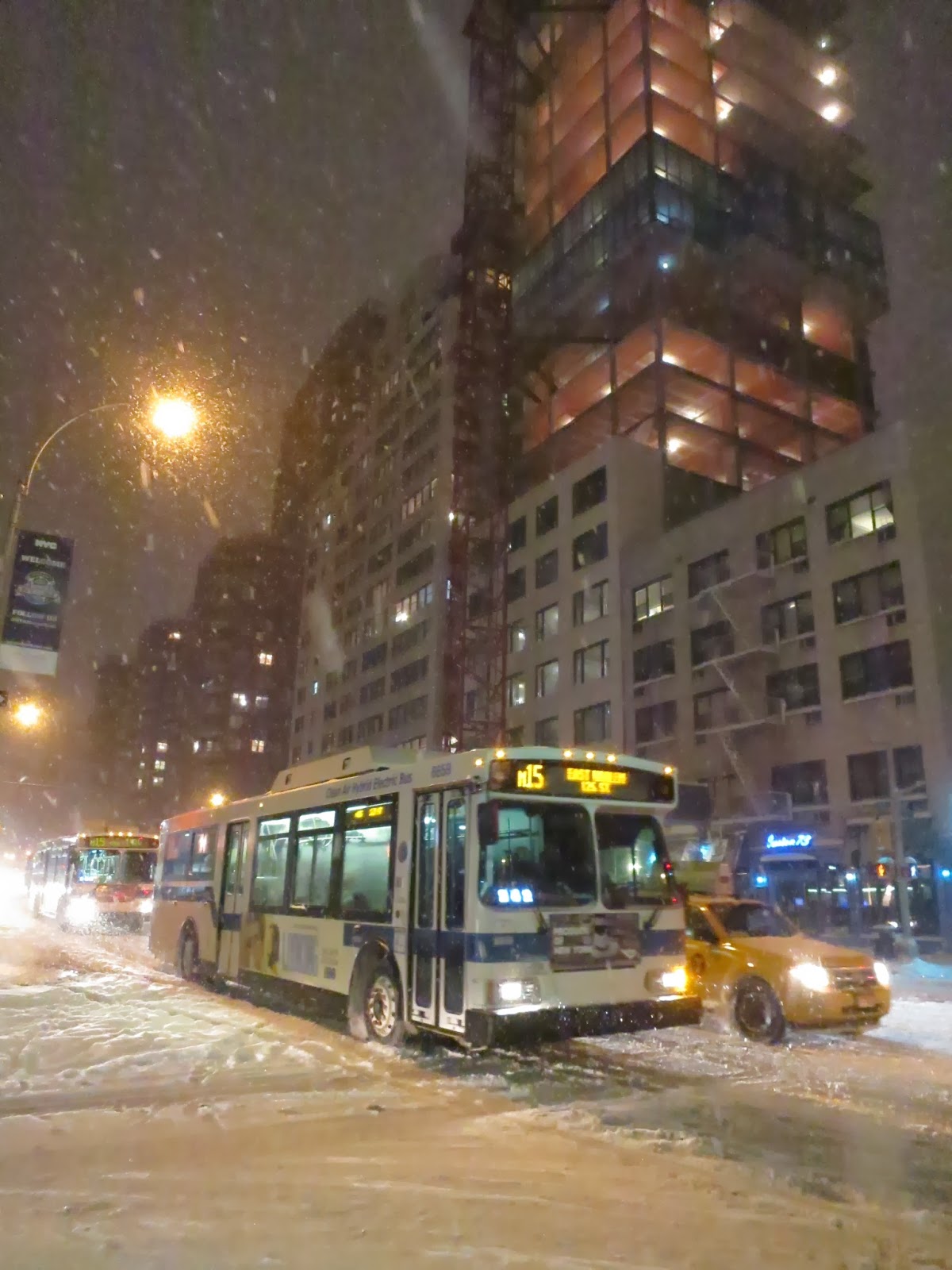 Not an auspicious start for Antiques Week or the Ceramics Fair, I would posit, as the show's dealers and the opening's attendees both struggled to navigate the city's treacherous streets, with weather forecasters predicting up to a foot of snow in Manhattan overnight.


By the time I made it to the Bohemian National Hall on 73rd Street, the venue for the New York Ceramics Fair, there was already a heavy blanket of snow on the ground, and the temperature had dropped into the mid-teens, and was heading further south. 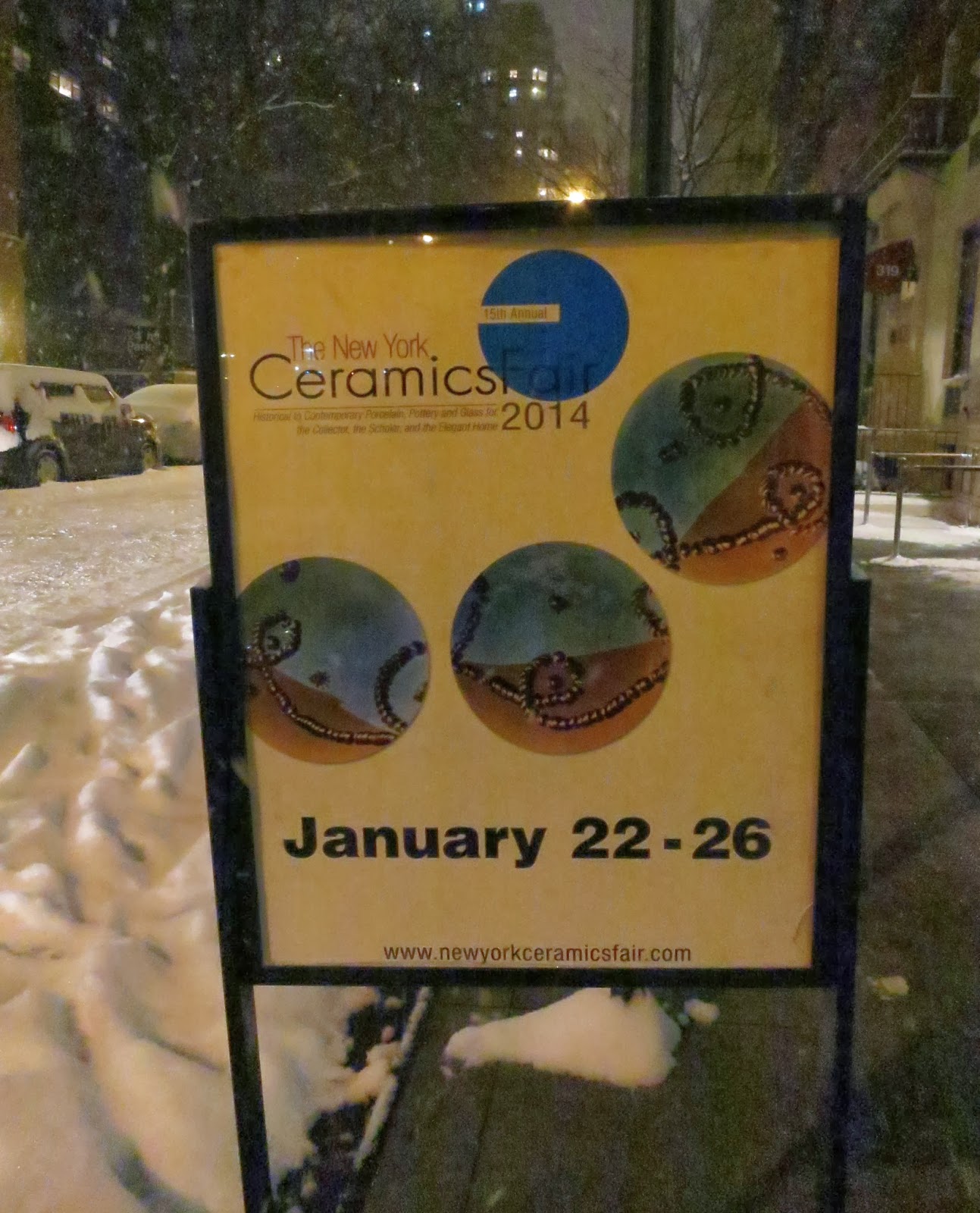 A little bit of snow was not about to keep Reggie from attending the Ceramics Fair's opening party, Dear Reader.  Not on your tin-type!  Reggie wouldn't miss the Ceramics Fair (one of the highlights of Antiques Week, in his view) for the world. 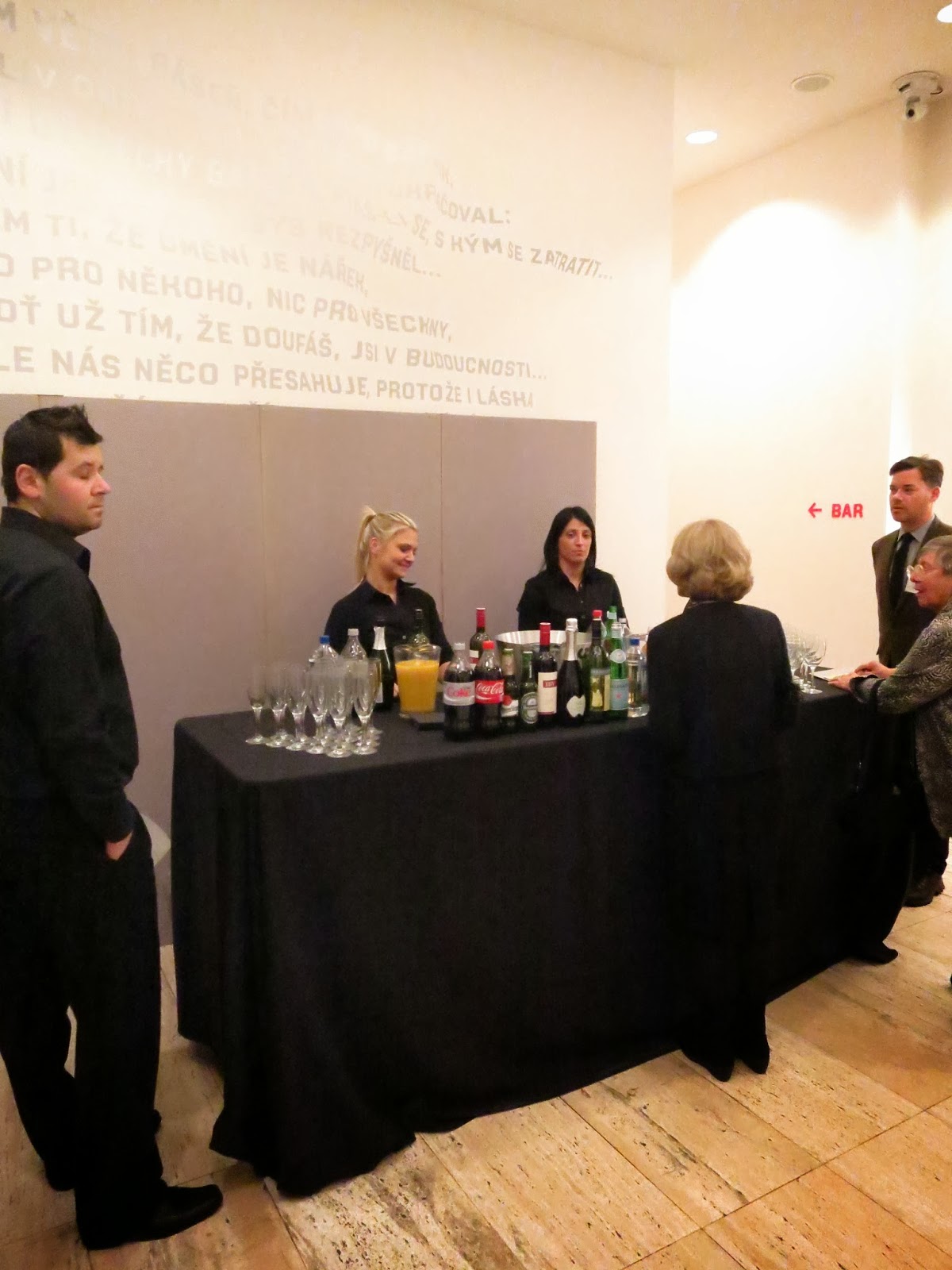 After depositing my coat and hat with the coat check, my first destination was the party's open bar, where I fortified myself with a glass of champagne and marched into the Bohemian Hall's concert hall, where the dealers were set up.


I made a bee-line to the booth of Earle D. Vandekar of Knightsbridge, where I thanked Mr. and Mrs. Paul Vandekar, shown in the preceding photograph, for inviting Boy and me to the opening party, as their guests.


The Vandekar's always have a tasty selection of pretty porcelains and ceramics on display, and we've bought pieces from the over the years for our collection at Darlington House. I was quite taken with this early pearlware Staffordshire pair of recumbent figures of Cleopatra and Anthony, ca. 1815.  I've admired similar examples of this pair before, and hope to eventually own a set one day. 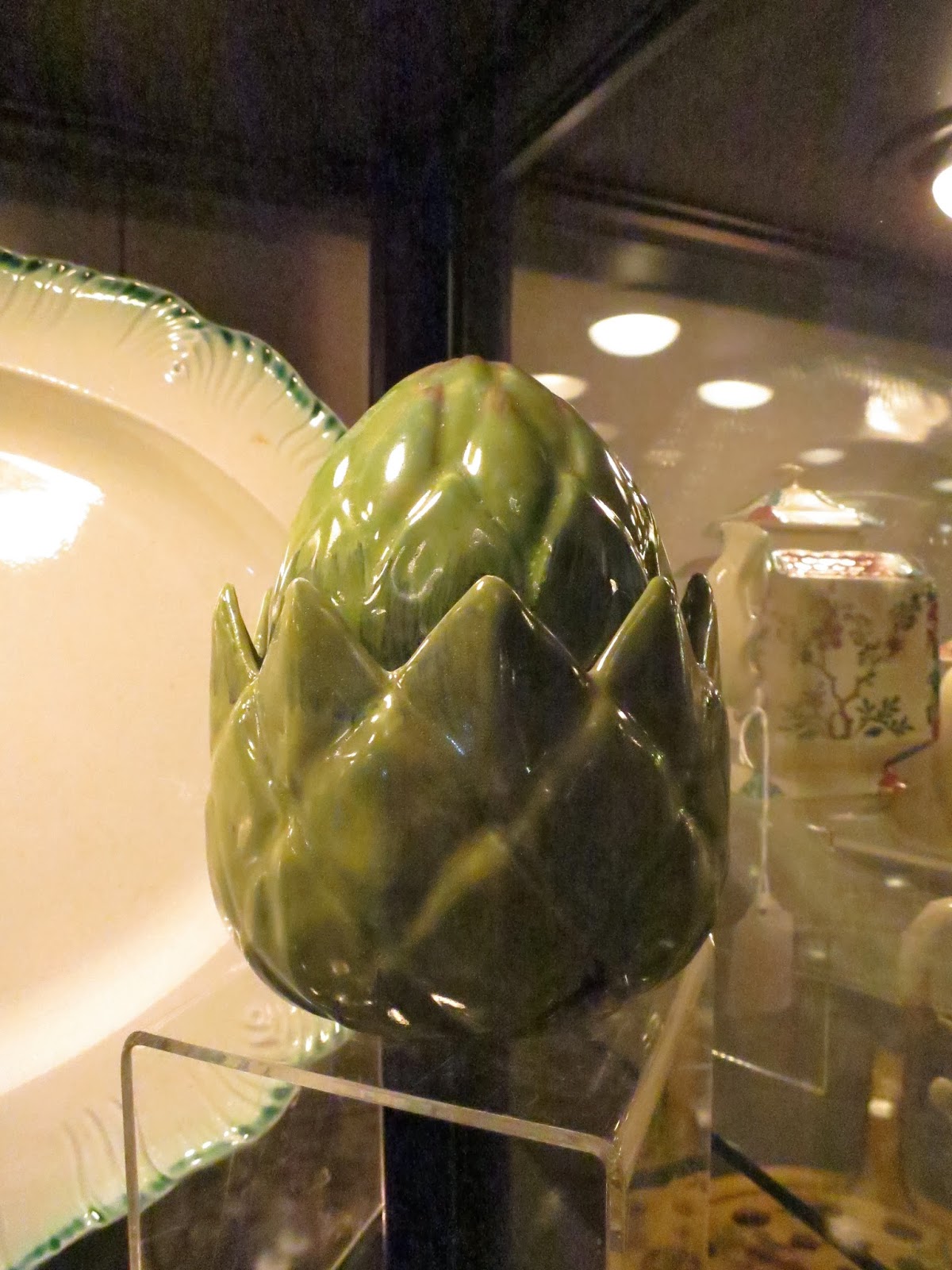 I also took a fancy to this lidded pearlware sugar bowl (at least that's what I think it is) in the form of an artichoke, made in the first quarter of the nineteenth century.


My next stop was the booth of John Howard, of Woodstock England, where I was warmly greeted by Mr. Howard and his friend Ms. Myrna Schkolne, a noted expert on early English ceramics.  I didn't catch the name of the Laughing Lady between them, but I believe she may have come up to New York from Baltimore for the shows.  We've bought numerous pieces from Mr. Howard over the years.


The Laughing Lady was at the Ceramics Fair with Mr. Stiles Colwill, seen in the green jacket in the above photograph, who kindly introduced himself to me when he overheard me discussing Reggie Darling with Mr. Howard.  I have heard many nice things about Mr. Colwill from our mutual friend, Ms. Meg Fielding, a fellow Baltimorean and the writer of the charming blog Pigtown Design.  It was a pleasure to finally meet Mr. Colwill. 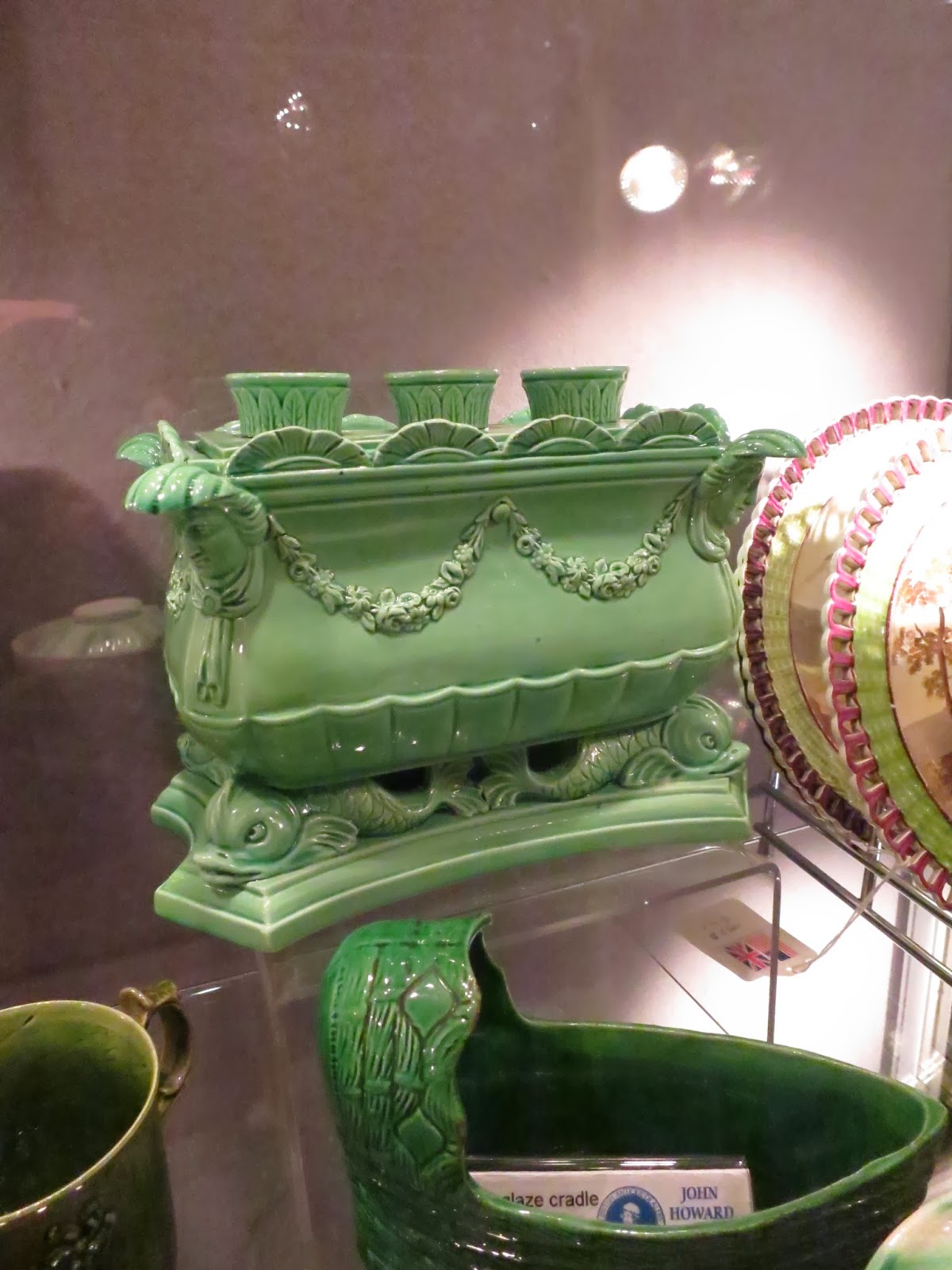 In John Howard's booth I was crazy about this green glazed creamware bow pot, shaped like a sarcophagus, ca. 1800. 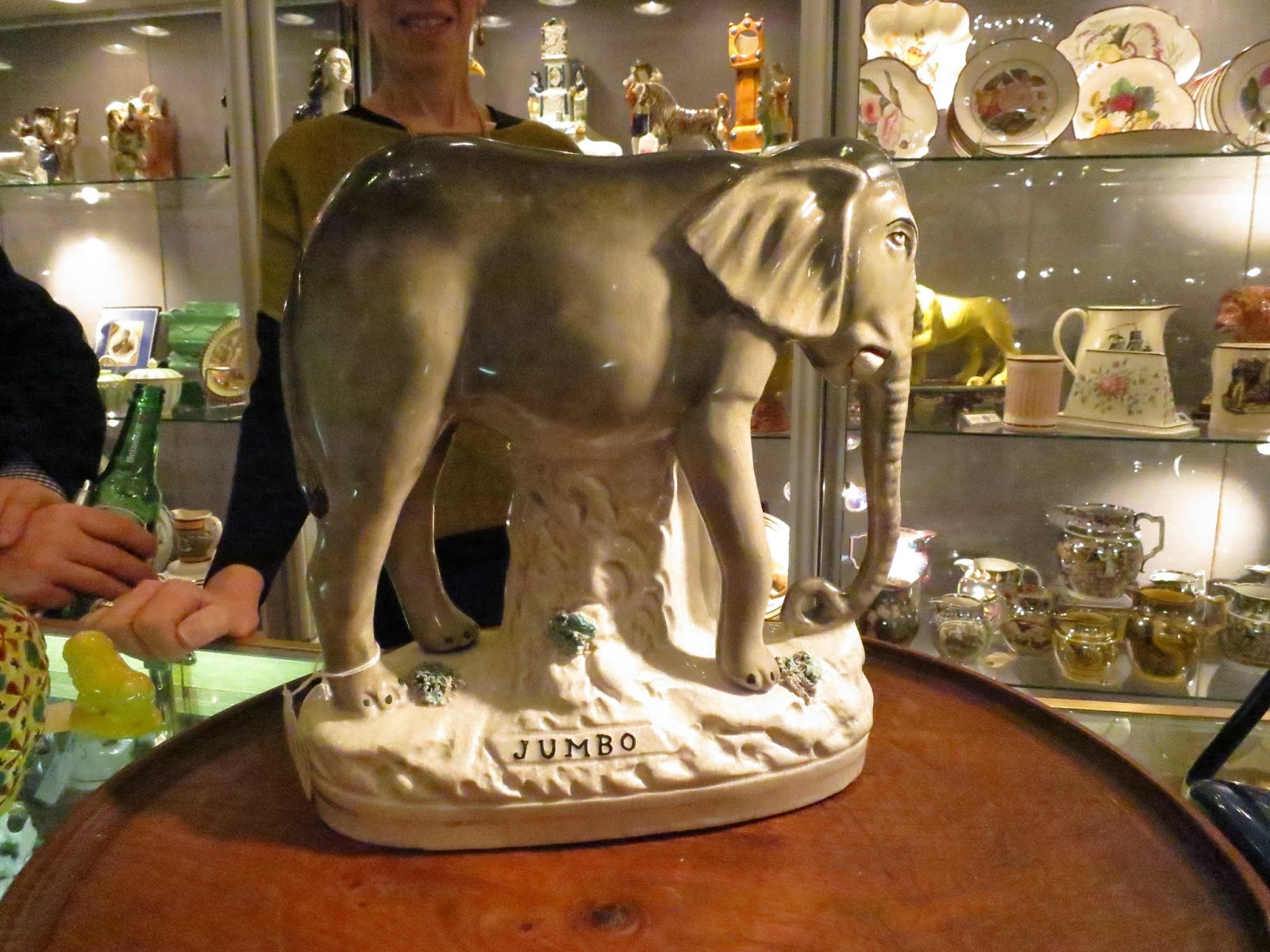 I was also overjoyed to see a Staffordshire figure of Jumbo the elephant, ca. 1850, similar to one in our own collection that we bought from a different dealer at the Ceramics Fair several years before.  You can learn about this marvelous pachyderm in the post I wrote about buying ours here.


Turning from John Howard's booth I strolled into that of Santos, of London England.  I was attracted by the group of large Chinese export porcelain punch bowls on display, sitting on top of the glass display cases.


I was particularly drawn to the one shown in the preceding photograph, ca. 1800, painted with Masonic emblems.  Although I am not a Free Mason, I love their symbolic decorations, and have always admired Chinese export porcelains painted with them.  Alas, this bowl was not to be added to my collection of export punch bowls as the proprietor of the booth was in no mood to speak with me, and became visibly irritated when I asked him if it would be okay if I took a photograph of the bowl he had on display.  Ah well—I hope he will be in a better humor when the Ceramics Fair opens to the general public.


Turning from the Santos booth I made my way back onto the main floor of the hall to see what else was on offer.


I was intrigued by this early nineteenth-century pearlware bust of George Washington, stamped 1818, from the pottery works of Enoch Wood.  I already have a similar one in my own collection, but I believe mine is later, from a strike done in the 1880s or so.


I then stopped by the booth of Moylan-Smelkinson of Baltimore, Maryland (do I notice a trend of Baltimoreans here?) to say hello to the two lovely ladies, but forgot to take photographs of their booth in my excitement in seeing and speaking with them. 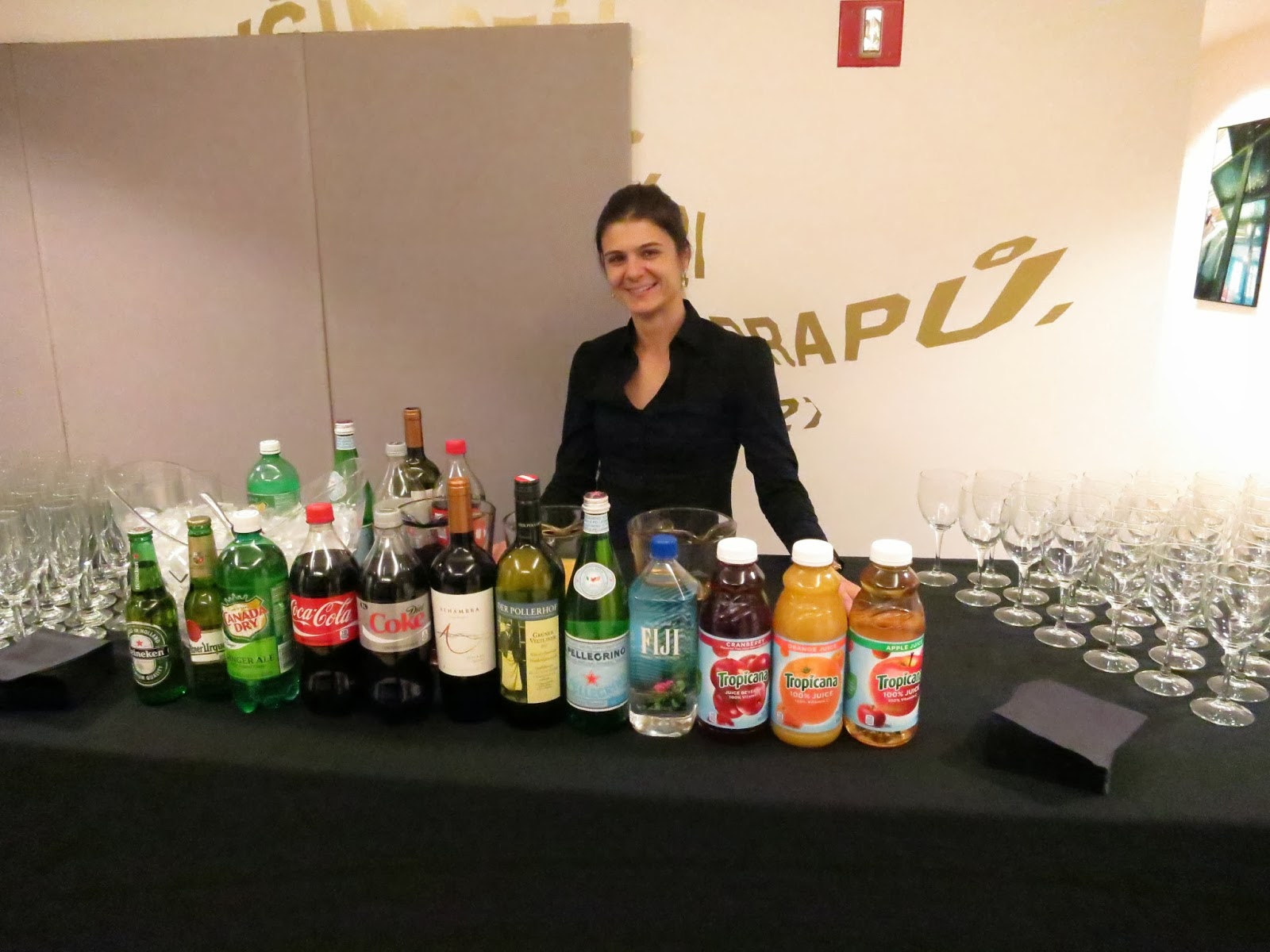 By this time I had made a full circle of the main floor of the Ceramics Fair, and so I made my way upstairs to the mezzanine level, where I was delighted to find another bar set up and a ready replenishment of my empty champagne flute.


My mission in going to the mezzanine level was to stop in the booth of Lynda Willauer Antiques of Nantucket, Massachusetts.  Boy and I are regular customers of Ms. Willauer's, both at shows in New York and at her charming shop on Nantucket.


It was in Ms. Willauer's booth that I found my can't-live-without purchase of two majolica garden stools in the form of tree trunks, made in Sweden ca. 1880.


Boy and I have been under bidders on similar tree trunk-shaped garden stools at auctions in the past, and we have had our eyes out for one ever since to use on our screen porch during the summer, as an occasional table.


We quickly determined that we had to have them, and came to an agreement with Ms. Willauer to buy them from her.  While I wasn't expecting to come away with two of them, they were sold as a pair and I am now the proud owner of not one, but two of these marvelous garden stools.


Our final stop at the Ceramics Fair was the booth of Maria and Peter Warren Antiques of Wilton, Connecticut, where Boy had spied an attractive, early nineteenth century black basalt covered sugar bowl earlier during the show.  He is now the happy owner of the basalt sugar bowl, seen in the following photograph, which will join our burgeoning collection of basalt when we return to Darlington House this weekend. 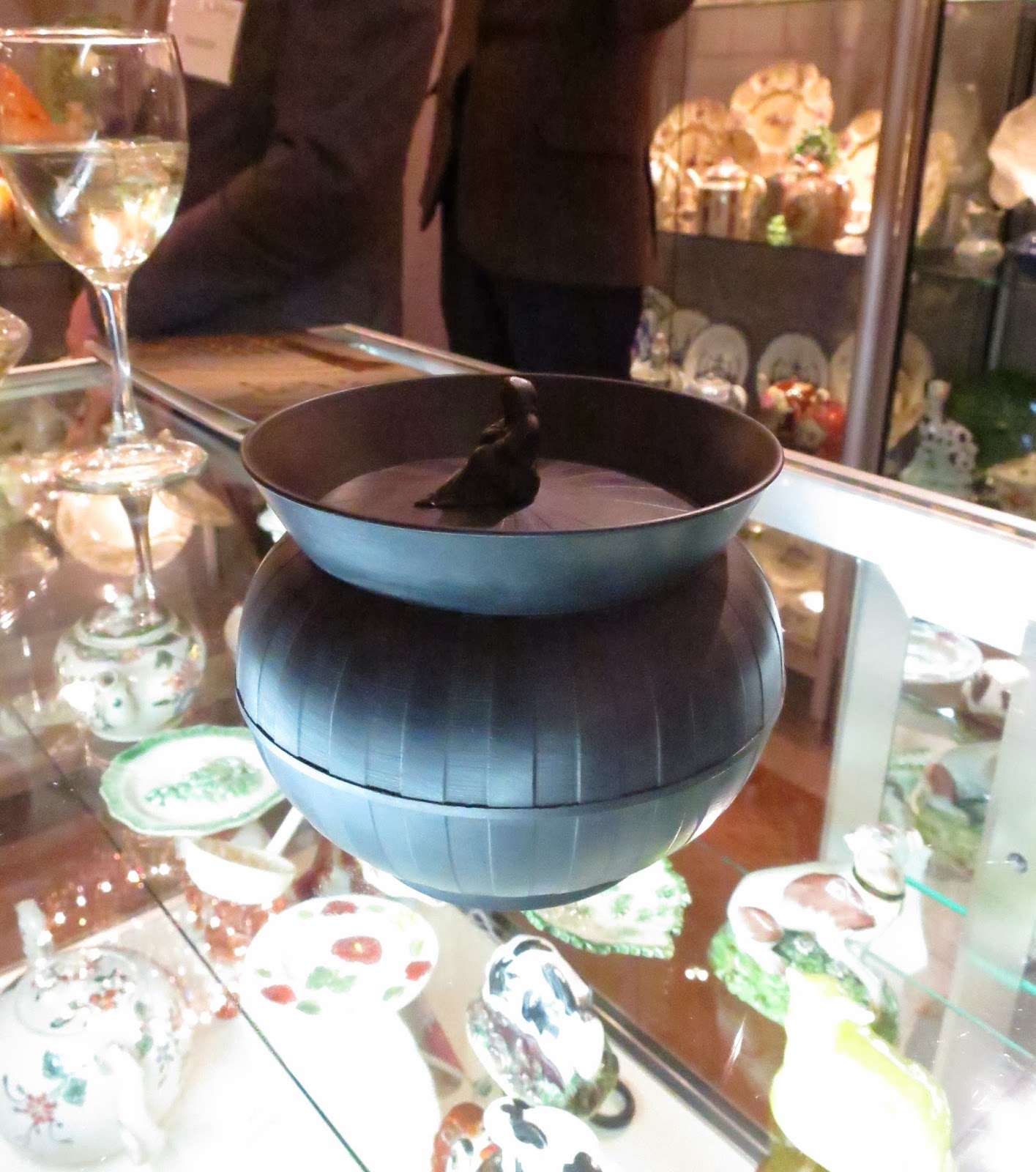 
With our purchases completed, we bid the Ceramics Fair adieu and headed out the door for a quick bite of dinner at the nearby cheap-n-cheerful Finnegan's Wake Irish pub.


Well fortified with ceramics, drink, and food, we then braved the snowy night and walked the several blocks to our apartment building and to our dear Basil, who was snoozing away on his pillow waiting for us.


And with that, Dear Reader, Reggie's completes his reportage on this year's New York Ceramics Fair.

Next: Reggie Attends the Winter Antiques Show Opening Party
Posted by Reggie Darling at 2:11 AM