Reggie Out & About: Glenda Ruby Book Signing Party at Olana

Not long before the Holiday Season Madness descended upon us, Boy and I were invited to and attended a book signing party held at Olana, the celebrated, exotic fantasy of a stately home built by Frederic Edwin Church (1826-1900).  As readers of this blog are well aware, Mr. Church was one of our Nation's most revered and talented artists and one of the founders of the Hudson River School of landscape painters.  In his day he was as famous as a rock star, became rich as Croesus, and built Olana as a trophy of his well-deserved success.


Olana sits on the top of a hill commanding a magnificent view out over the mighty Hudson River.  The house, which was designed in collaboration with Calvert Vaux (1824-1895), another creative Titan of the nineteenth century (he co-designed New York's Central Park), has been beautifully preserved and restored (with much of its original contents intact), and is open to the public.  Olana is one of New York's—no, this country's—historic treasure houses.  If you haven't made a pilgrimage to see it yet, Dear Reader, I highly recommend that you do so.  But be sure to book your tickets well in advance, as Olana is a popular destination and its tours frequently sell out.


The book signing party was held in Olana's visitors' center, an attractively converted former carriage house on the estate's property. 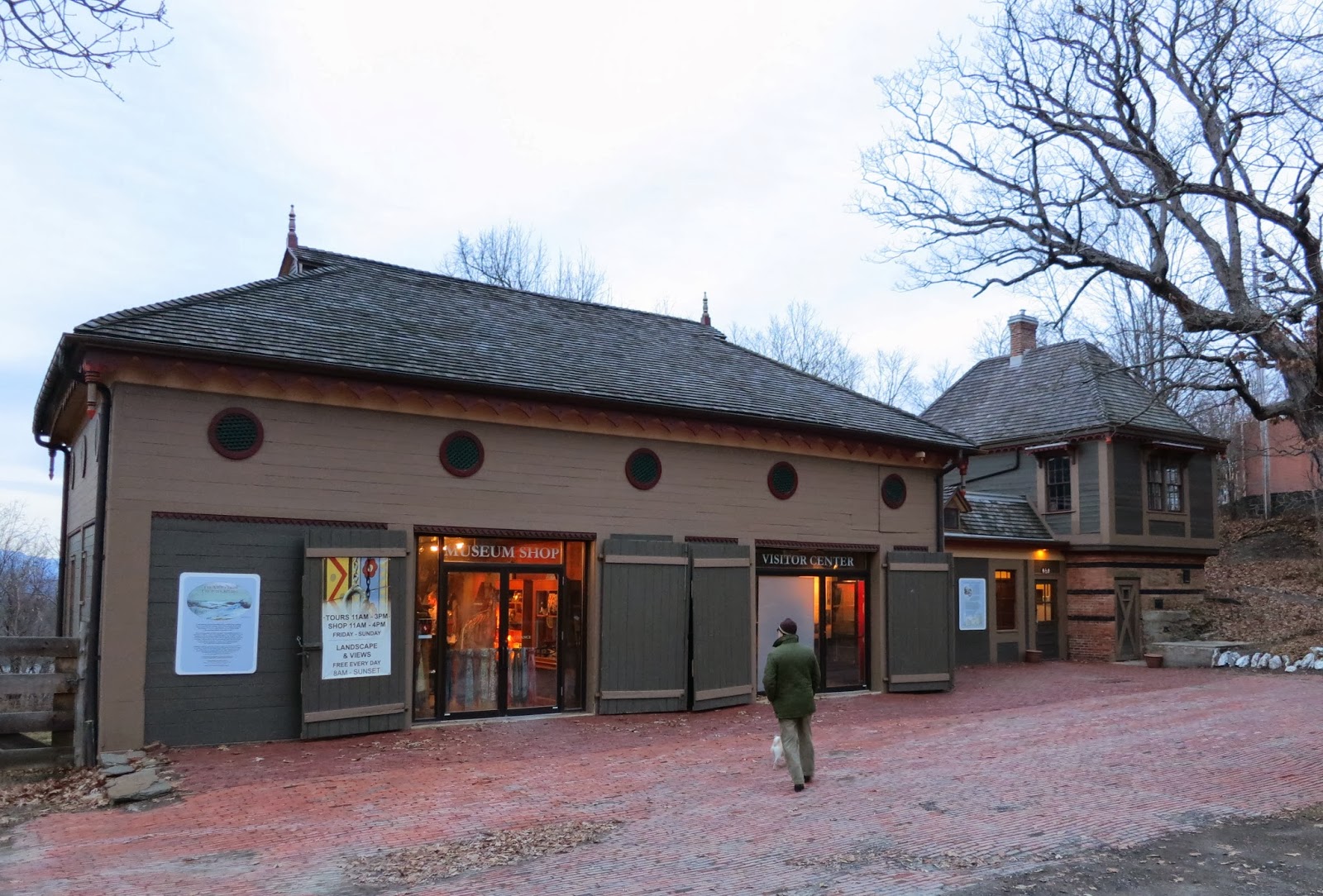 The featured book was written by a dear friend of ours, Ms. Glenda Ruby, and is a delicious read.  It is a murder mystery, titled Death at Olana—which explains why the party was held there (although there is no formal connection between the author and Olana).  The book is very clever and amusing, and it marvelously captures the spirit and the doings of those of us who variously inhabit the surrounding Columbia County, an area known for its gorgeous rural scenery, a jumble of city folk and locals, and all the crafty shenanigans that one would expect in an area where such cultures (sometimes) collide.


"Most of the charming people and the ne'er-do-wells, the heroes and the villains in this tale, abide in Columbia County.  While this is still very much the country, agricultural and rural, about thirty years ago there began a diaspora of New York cognoscenti who chose to spend time in quaint hamlets and villages, rather than amid the haute bourgeois excess of say, Long Island, to choose a random example."

"And so among the apple, pear, peach, and cherry orchards, the dairy farms, and the good local people who run them, you will increasingly find upper middle, indeed wealthy families, singles, straights and gays, painters, writers, publishers, lawyers, media types, and investment bankers [editor's note: such as Reggie] who have migrated to this historic area.  We all believe we live in the most beautiful place in the world.

"Some of us are murderers."

"So begins the first of the Hudson Valley Murders, a new series for lovers of mystery and malicious wit."

We arrived at the party on the later side after what I understand was a veritable crush of well-wishers and friends of the author.  Food and drink was plentiful, and I enjoyed myself immensely.  So much so, in fact, that I gleefully bought half a dozen copies of Death at Olana as Christmas presents, and had them inscribed by Ms. Ruby.  She gamely complied, I am happy to report.


One runs into and meets all sorts of people at parties I find.  I had a brief and pleasant conversation there with Mr. Stephen Shadley, the noted interior designer, who is someone I first met thirty or so years ago.  Goodness!  I find that I am saying things like "more than thirty years ago" more frequently of late than I care to admit!  Where does the time go, I ask you?


One of the other guests at the party was the divine Ms. Ros Daly.  You can see her in the preceding photograph holding my copies of Death at Olana, which she graciously agreed to hoist while I snapped her picture with the admiring Boy Fenwick at her side.


I am beyond fond of Ms. Ruby, who is a wit, a bon vivant, a raconteur, and makes the best Boeuf Bourguignon that I've ever had the pleasure of eating.  Plus, she's a Southerner and has the most marvelous whiskey and cigarettes voice imaginable.  She is Heaven!

Ms. Ruby does a superb (and quite humorous) job of depicting (some would say skewering) the insulated little world we live in during weekends up in Columbia County, among the fields and orchards, and—occasionally as it turns out—naked dead bodies swinging from ropes!

After reading Death at Olana, I sincerely hope that Ms. Ruby follows through on her threat that it will be the first in a series of Hudson Valley Murder Mysteries.  I want more! 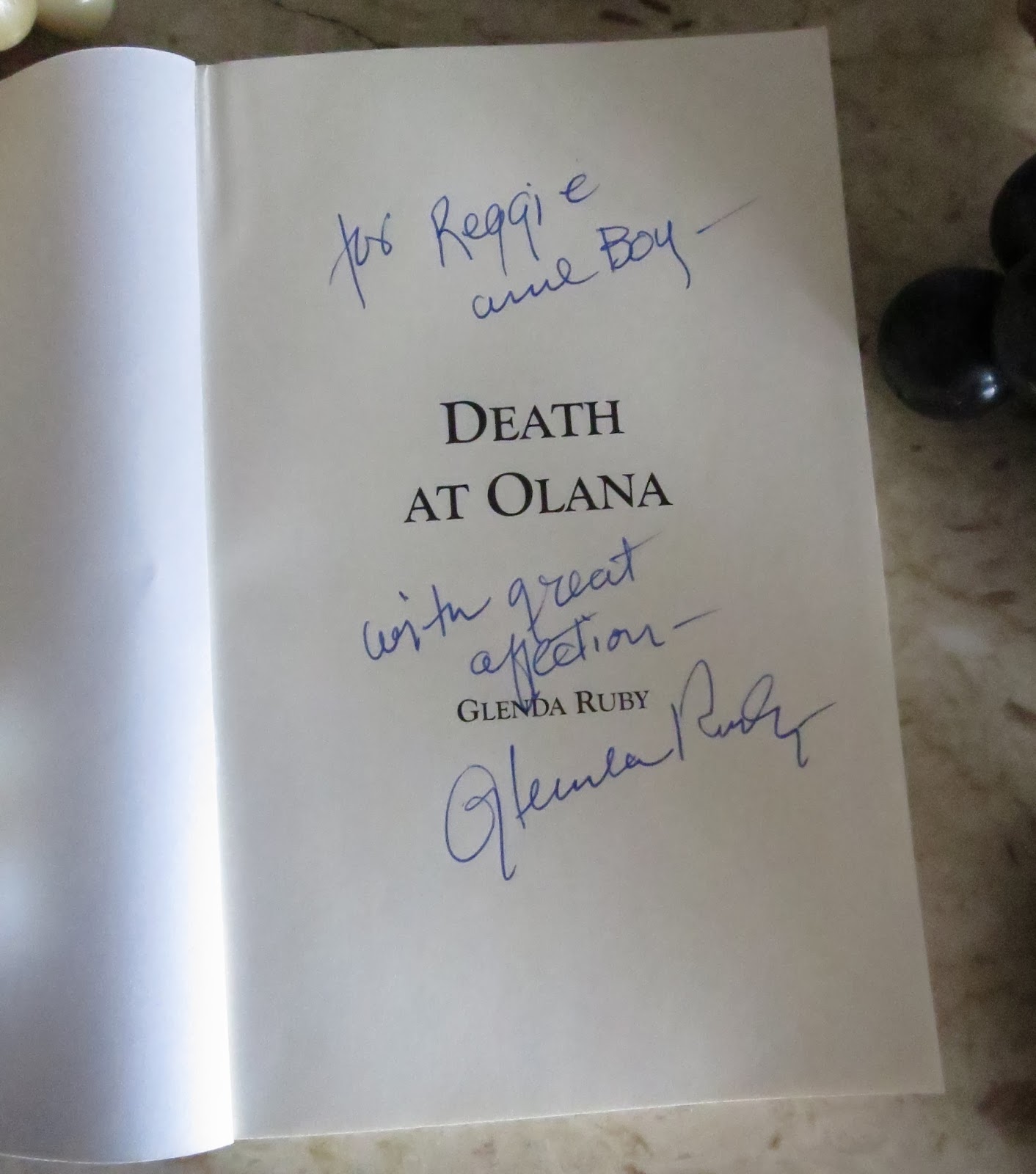 If you are interested in a light and entertaining read (and who isn't?) full of colorful characters, amusing situations, and a healthy dose of keenly observed insights into the human condition (at least as it is found two hours north of Manhattan in the county where Reggie spends most of his weekends), then I highly recommend Death at Olana.  I assure you, Dear Reader, you will not be disappointed!


Oh, and while you're at it, do buy at least several copies of the book to give to your friends and loved ones, too, as I'm sure they'll enjoy it as well!

You can order copies of Death at Olana here.

Please note: Reggie admits that he received a copy of Death at Olana as a gift from Ms. Ruby many months ago.  However, he insists that isn't why he wrote this review (or why he bought six copies of it at the party—at full retail price he might add).  No, he has written this post solely for the amusement of his readers and to encourage them to buy Ms. Glenda Ruby's book based upon its own many merits.