In today's post I reveal which of the five school of Duncan Phyfe games tables I bought during the Important Americana auctions held in New York this January.  Of the forty-three Dear Readers who responded to my query (both here and on my FB page), the vast majority thought I bought either lot 369 (52%) or lot 383 (39%) in the Sotheby's sale.  Only two of you (5% of respondents) correctly posited that it was actually lot 410 (the least "gainly" of the ones offered) that I ultimately brought home.

Here is how it happened:

The Sotheby's and Christie's Important Americana sales were held on Friday, January 24th, and Saturday, January 25th, with previews held during the week leading up to the sales.  I was determined to make it to the previews, Dear Reader, to examine the school of Duncan Phyfe games tables discussed in my previous post, and I was fortunate to be able to slip away from my office the afternoon of the last day of the previews to do just that.


My first stop, though, was at '21', where I had a leisurely lunch with an old friend—a most excellent way to start out such an enjoyable outing.  I suggested to my friend that we meet at '21' because it is only a stone's throw from Christie's, where the best of the five games tables I was interested in looking at was on display.  After bidding my lunching companion adieu I strolled over to Christie's just in time to look the table over, slipping into the exhibition room as the handlers were beginning to break down the preview ahead of the next day's sale.  While I concluded the Christie's games table was certainly a very handsome piece, it did not get my juices flowing sufficiently to make me seriously consider leaving a bid for it.  Besides, I knew it would sell well above my price range, so why even bother?


I then hightailed it over to Sotheby's to take in their preview, which included the four remaining games tables, each with a supposed Duncan Phyfe connection, in which I was interested.  As is typical of the Important Americana sales at both auction houses, most of the better furniture on offer at Sotheby's was of the late-eighteenth-century ball-and-claw variety.  While I can appreciate the merits of such furniture, it is not of interest to Dear Old Reggie.  No, I was there to check out the goods of the first quarter of the nineteenth century, also known as the Federal and Classical eras, which is the sweet spot of our collecting at Darlington.

Fortunately there was a grouping of furniture and decorations from that period, where—not surprisingly—the four games tables I was interested in examining were to be found.

The first table I came to examine was lot 383, the "Best" quality trick-leg table shown in the preceding photograph.  While admittedly its form and execution was very fine (in auction parlance), there had been much restoration to the table, with the underside of the top largely rebuilt.  That nixed it for me.  Besides, we already own two similar form school of Duncan Phyfe tripod tilt-top tables at Darlington, which sit at either end of our sofa in our drawing room.

I next looked over lot 369, the five-legged games table on offer, but passed on it, too, because we already have a similar Pembroke-form table that we bought at Bernard & S. Dean Levy a decade or so ago.

Looking around the room I then noticed lot 410, a table that I had dismissed when looking at Sotheby's online catalogue.  Wait a minute, I thought—what about this one?

On closer examination I decided I liked the gutsy form of the pedestal games table with its four turned and carved columns rising out of a four-legged base.  It was, admittedly, not as pretty or spare as lots 383 or 369, but it certainly had a lot of impact, and it wasn't in a form that we already owned.  Hmmm . . . I wondered—could this be worth considering?

By this time Boy had joined me at the preview.  He was as surprised as I was to find that he also liked the pedestal games table, and preferred it to the others on display.  After giving it a close once over, we then turned it upside down to examine its innards, as one should always do when considering buying an antique piece of furniture.  Other than the replacement of the bottom of its concealed compartment, the games table looked "clean" to us, with the expected age, condition, and color one wants to see in such pieces.

We were not all that concerned that the bottom of the compartment had been replaced, Dear Reader, and we were actually heartened that whoever had done so hadn't attempted to give it an unnatural aging, in an attempt to deceive.  It was what it was—an obvious repair.  But that's the only one we found.


We left the preview asking ourselves if the columnar pedestal games table would be an appropriate addition to our collection of school of Duncan Phyfe furniture at Darlington, and if so should we bid on it?  And how much should we bid?  Over cocktails and dinner that evening we decided that it was worth a try, and so we returned to Sotheby's the next day to see whether we might be able to acquire it at a sufficiently reasonable price. 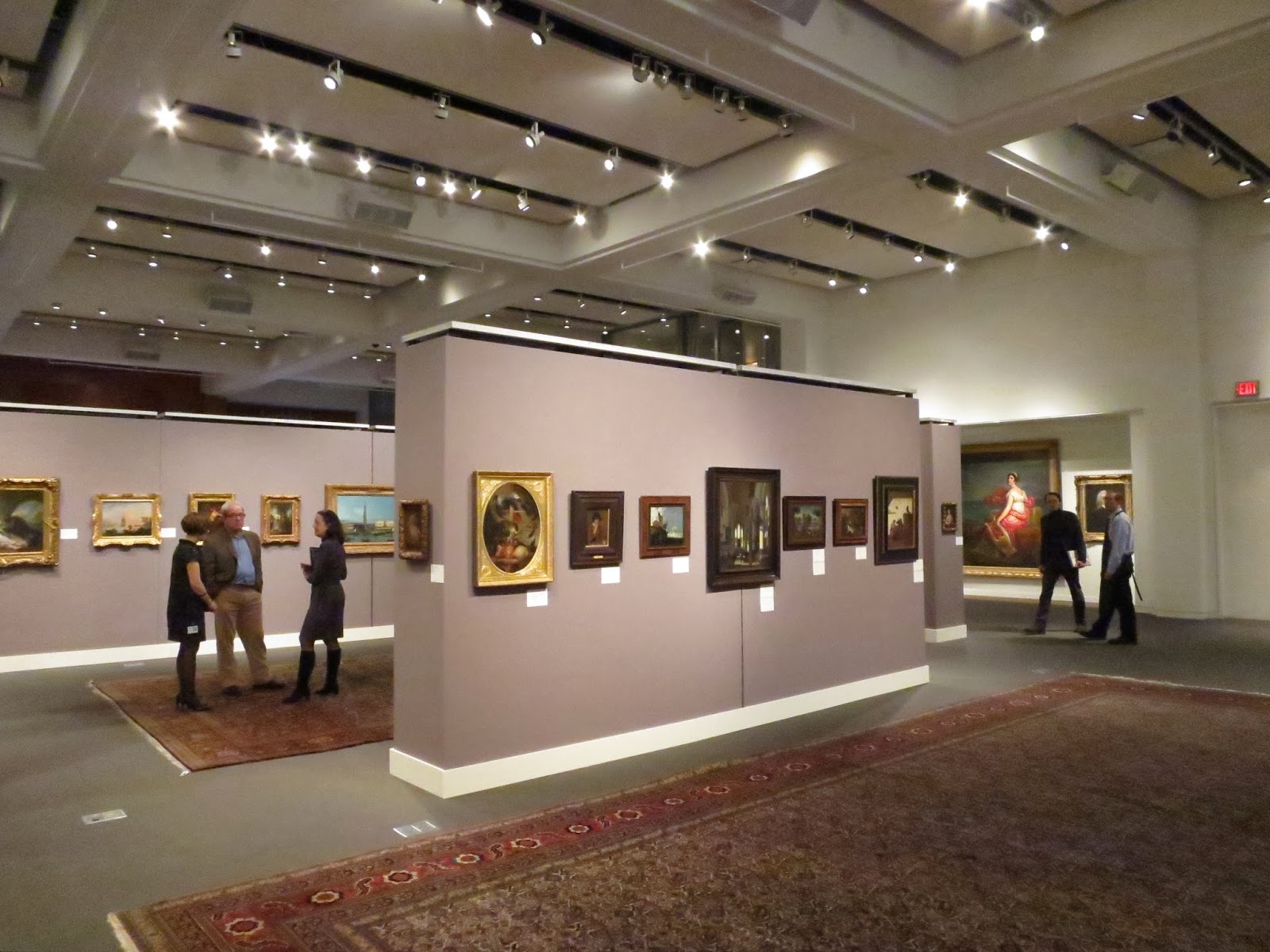 The table we were interested in was one of the last lots in the sale.  We arrived at Sotheby's well before it came up, and so had a lot of time on our hands to wile away before it did.  Fortunately, in addition to watching the auction progress through the lots leading up to "our" table, there was a preview exhibition of Old Master paintings on the same floor to examine.


The auctioneer for the Sotheby's Important Americana sale was very professional and personable, and I have to give her a lot of credit for moving along what at times appeared to be a near-moribund room.  She had her work cut out for her, Dear Reader.  With the exception of a small number of lots that sold well above their estimates, almost everything in the sale either went within or below estimate, and in some cases well below estimate.  That is, if it sold at all.  A fairly high proportion of the lots on offer failed to meet their reserves and went unsold.  While not exactly a blood bath, it was clearly not a great day for the auction house or the sellers it was representing.  It was, on the other hand, a very good day for buyers as deals were definitely to be had.  I found myself repeatedly amazed at how inexpensively many of the lots were being hammered down—in some cases at prices well below what one might pay for new, far-lesser-quality pieces of furniture.


By the time lot 410 came up the room was largely deserted.  We were hopeful that we would be able to get the pedestal table at a good price, and were heartened that two of the games tables in the auction had been hammered down below their estimates (and one had been passed altogether).  While we had come prepared to bid into the estimated $5,000-to-$10,000 range for the table, we were pleased to find ourselves in what can only be described as a half-hearted contest with only one other bidder, and we were exhilarated when the final hammer came down at $3,500 and the table was ours.

Once we got the table into our city apartment and examined it more closely, we asked ourselves why was it that we were able to get it so inexpensively?  Were we the late-in-the-sale lucky beneficiaries of a less-than-stellar auction where supply outstripped demand?  Or had we bought a compromised, cobbled together mess that no one else wanted?  What if the table was not of the first period at all, but rather a later reproduction?  Upon closer examination, didn't we think the carving just wasn't crisp enough?

We then asked ourselves, given the price we paid for the table (which is less than what a run-of-the-mill, cheaply-made one at Ethan Allen might cost), did we even care?  And the answer was of course not—it was a bargain!

If I'd paid two or three times what I did for the table I might get all worked up, second guessing myself endlessly on it.  But since I didn't, I haven't, and I must say that I'm very pleased with this acquisition.


I think our school of Duncan Phyfe columnar pedestal games table looks absolutely marvelous in our Snuggery at Darlington, where it fits right in with the other, somewhat bombastic American Classical furniture of the early nineteenth century, as well as some complementary English chairs.  In fact, when we put "our" pedestal table against the wall in our Snuggery underneath a Sully-framed portrait and loaded it up with suitable period accessories, we thought it looked perfect, as if it had always been there.

Which, to my mind, Dear Reader, is the sign of a successful acquisition.  Don't you think so?