Reggie is one of the legions of bloggers who is a devotee of Belgian Shoes.  These iconic, soft-soled slippers, known as Belgians, have a long-time, cult-like following among the Social Register set and fashion cognoscenti, and more recently among certain lifestyle bloggers.  They are available in this country today only from the carriage-trade Belgian Shoes store on East 55th Street in Manhattan, and also from the company online. 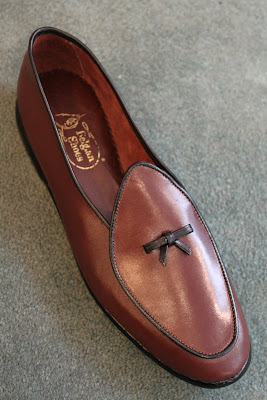 The "Mr. Casual" in brown calfskin, a personal favorite
The store isn't all that much to look at, as it sits in a nondescript building on a side street, and is very plainly decorated, if one could call it decorated at all.  But what treasures are to be found inside of it! 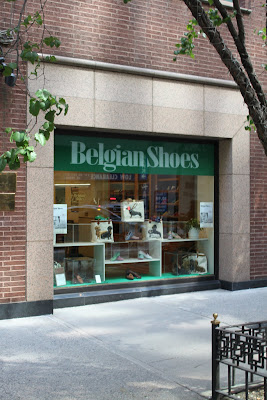 The store on 55th Street, just east of Park Avenue
Belgian Shoes was founded in the 1950s by Henry Bendell, a nephew of the founder of the Henri Bendel store in New York (and who was, himself, once president of that fabled retailer), and their shoes are still hand-sewn to this day in the country from which they've taken their name. 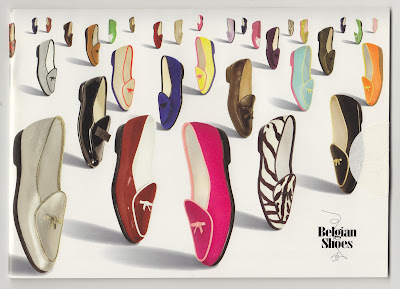 A catalogue from years gone by
(note colorful options for women)
The store is open only from 9:00 a.m. to 4:30 p.m. on weekdays, and from 10:00 a.m. to 3:00 p.m. on Saturdays.  They do minimal advertising, only in The Wall Street Journal and Quest Magazine, and the shoes are mostly sold by "word of mouth" to repeat customers and those introduced by same.  Not surprisingly, they are rather expensive.

Belgians have been the subject of countless blogosphere postings, including a recent one by Admiral Cod.  While it's not that I've got much to add to the volumes of what has already been written about these addictive slippers, I do feel compelled to write about them here because, well, Reggie believes he is the one who really discovered Belgians in the first place . . .

. . . at least among a group of friends he once had, but doesn't run with anymore. 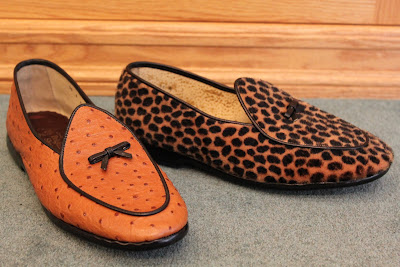 In addition to plain leathers, Belgians come in exotic hides and fanciful prints
(not for the faint at heart)
But long before that, I first learned about Belgians shortly after moving to New York after college, thirty years ago.  That is when I met and befriended a high-tone decorator named Harry who I am no longer friends with for reasons that are known to him but remain a mystery to me to this day.  I guess I did or said something off-putting, but Heaven knows I don't recall whatever it was.  Ah well, life goes on. 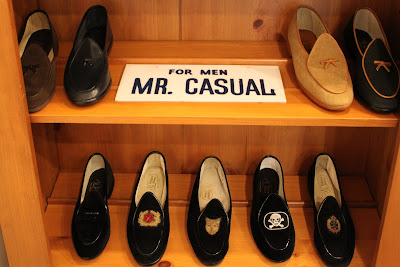 One can also have one's crest applied to one's velvet or patent leather Belgians
Anyway, Harry wore Belgians almost all the time, as certain swell-New-York-lifelong-bachelor-decorator types are known to do, and insisted that I make a pilgrimage to their store on (then) East 56th Street and buy myself a pair or two.  Being an open-minded chap I took his advice and did so.  I've been a devotee ever since.  In fact, I'm wearing a pair as I write this post that you are now reading, Dear Reader. 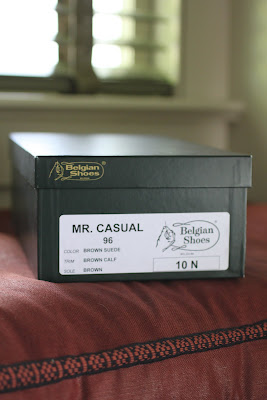 One time Harry and I were out on the Lower East Side of Manhattan, where we were, admittedly, doing a bit of slumming.  We had gone out to a boozy dinner at the then white-hot fashionable Bowery Bar, and were standing on a street corner afterwards, discussing what to do next.  As we stood there, up towards us came a stumblebum, hand outstretched, begging for change.   As I reached into my pocket, Harry leaned over to me and said, sotto vocce, "The shoes, check out the shoes!" and motioned with his head toward the feet of the supplicant in front of us.  I looked down at the fellow's feet, and saw, much to my surprise, that he was wearing what appeared to be a brand-new pair of Belgians.  The incongruity of this was, to put it mildly, astonishing.  "Where did you get those shoes?"  I asked the bum.  He responded, "Do you like them?" "Why, yes I do like them,"  I said, "but tell me, do you know what those shoes are?"  I asked.  "They're comfortable, that's what they are," he said.  I responded, "Yes, I'm sure of that, as I have the same ones.  But those are expensive shoes, and not usually seen in this part of town.  Where did you get them?"  He said, "I got 'em at the Mission.  They've got lots of good stuff there they give away, for free.  You should check it out, you might find something you like there, too!"   Harry and I roared with laughter at this, and I said, "I'm sure that you are right, my good man, given what's on your feet."  I then handed him a dollar, and off he wandered into the night, wearing his Belgian Shoes. 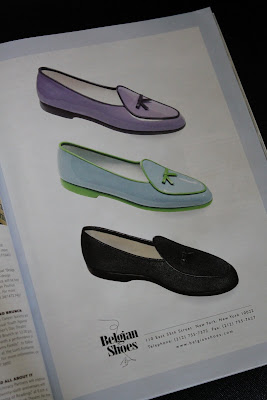 The Belgians ad in the May Quest Magazine
Several years later I took a share in a beach house in Fire Island Pines and fell in with a fast party-boy set that found my choice of footwear to be almost as amusing as Harry and I had found what the Bowery bum had on his feet that night.  At the time, the prevailing shoes of choice in the Pines were decidedly more plebeian in origin than my favorite slipper.  During the better part of the decade I spent going to the Pines I don't recall ever seeing a person there, other than myself, wearing Belgians.  Admittedly, Reggie was a bit of a fish out of water in that particular community on Fire Island.  For, on the other hand, when he visited friends in East Hampton it was, at times, difficult to find someone who wasn't wearing Belgians. 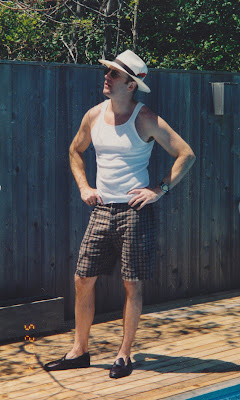 Reggie in his Belgians-wearing Fire Island days
But it was not until Boy and I bought Darlington House that my fondness for Belgians truly became an addiction.  As my readers know, Darlington is an old house and in the country, and for much of our occupancy has been a drafty and sometimes chilly place to hang one's hat, at least when the weather turns cool.  Under those circumstances, having a comfortable house shoe to slip in to when coming in from a sometimes wet, muddy, or snowy outside is advisable.  That such a shoe should have a soft sole is desirable, too, when many of the floors in said house are wood.   And that's where the genius of Belgians comes in.  Easy to slip in to and out of, they are supremely comfortable to wear, and their soft soles are perfect for silently traipsing through Darlington's rooms. 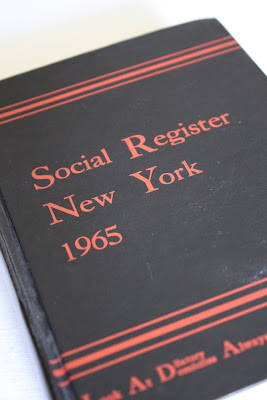 Part of the pleasure of wearing Belgians, aside from their comfort, is that they have tone: one doesn't often see them off of the UES/Greenwich/Hamptons/Palm Beach/Hobe Sound axes.  Of course there are other, more off-this-beaten path enclaves that one occasionally encounters a Belgians-wearing fellow traveler, such as Far Hills, Lake Forest, Grosse Pointe, Wayzata, Hillsborough, Santa Barbara, Pasadena, River Oaks, Highland Park, Mountain Brook, Buckhead, Charleston, Middleburg, Chevy Chase, Gladwyne, New Canaan, West Hartford, and Brookline . . . just to name a few. 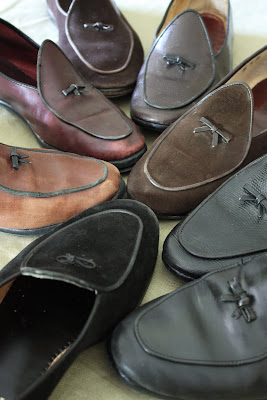 One each of our Darlington Belgians
Boy and I have, between the two of us, eight pairs of Belgians that we keep at Darlington, in assorted colors and leathers.  We wear the soft-soled "Mr. Casual" model, the only one worth owning as far as I'm concerned.  We each have several more pairs in our city apartment, too.  Boy also keeps a pair of Belgians (which he calls "Belgiques") in his office that he brings with him to wear in clients' recently installed houses or apartments, where the occupants often initially go shoeless or wear slippers to protect their new (and rather expensive) polished floors and handmade carpets.

I don't usually wear my Belgians when out and about, as I consider them to be primarily a house shoe.  I rarely wear them when leaving Darlington's property, and almost never out in the city.  I will admit to occasionally wearing mine when making a quick trip to the corner for a carton of milk, or when taking Pompey out for a discrete morning constitutional, and I sometimes change into them for a long plane ride.  However, that's about the extent of my public wearing of Belgians.  While I think women can look marvelous wearing them when out and about (and the color combinations available to women are extraordinary), I generally think most men look a bit, well, fey when doing so.

But I can't imagine life without them.

Tell me, where do you wear your Belgians?

All photos, except of Reggie, by Boy Fenwick; photo of Reggie by Hazel Hazaga
Posted by Reggie Darling at 9:52 AM