Thank-You Flowers After a Party

As I reported in my last post, Boy and I recently gave a bruncheon party at Darlington House.  We had a delightful time doing so, and we particularly enjoyed the mix of guests who attended it, some of whom we were meeting for the first time.  I am happy to report that everyone who attended the party was charming, well-dressed, and marvelous company.  Boy and I had great fun and were saddened when the party inevitably drew to a close, when our last guests departed. 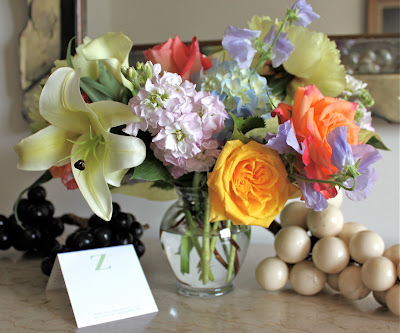 Imagine our pleasant surprise when three of them returned but fifteen minutes later, and the party was able to resume, albeit on a much cozier level!  It turned out that two of the three, a married couple, had missed their train back to New York, and the next train didn't leave for several hours.  The third of the three was their host for the weekend, and had given them a ride to the station.

Needless to say, we were absolutely delighted to see them!  We grabbed another bottle of Prosecco and a box of Li-Lac chocolates that another guest had thoughtfully arrived with, and we settled in to the screened porch, where we spent several delightful hours in amusing and clever conversation, interspersed with much laughter.  The highlight was when, at one point, the husband and Boy delightedly realized they both knew the lyrics to several of the songs from "The Producers" and fell into spirited song, much to the pleasure of the wife and me.  It was much fun. 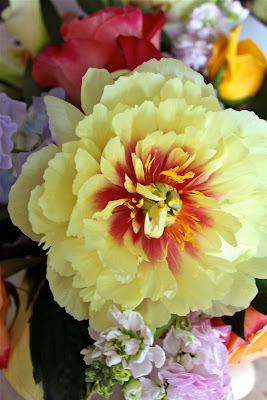 The next day, back in the work-a-day world, I received a phone call from Boy that flowers had just been delivered to the apartment, a gift of the couple.  And not only that, but they were from Zeze, one of Manhattan's premiere florists and a great favorite of those who appreciate such things.  How deliciously and extravagantly thoughtful, I said.  I couldn't wait to see them.

When I opened the door to the apartment, I was first met with the bouquet's sweet and heady fragrance, a pleasure indeed.  And what a pretty arrangement I found!  A mixture of roses, peonies, hydrangea, lillies, and sweet pea, all in lovely late spring colors, and in a discrete colorless glass vase.  How splendid.  And what a pleasure it was to receive it. 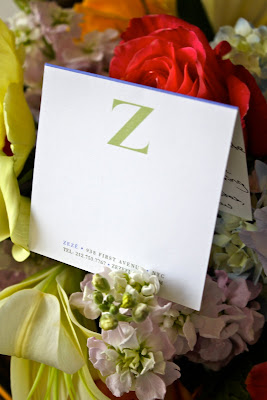 On top of that, it came with this charming note: "Dear Boy and Reggie, Thank you for a wonderful afternoon full of our two favorite things--sparkling conversation and sparkling wine.  We look forward to sharing many more of both! With warmest wishes, Emily & Andrew"  How about that! 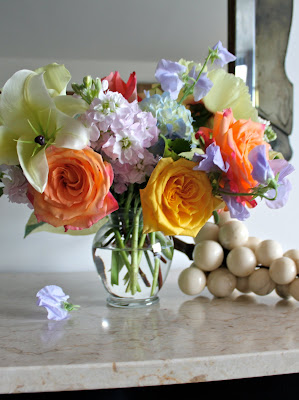 I am sharing this story with you, Dear Reader, for a number of reasons:
When giving a gift of flowers, Reggie recommends that his Dear Readers follow the example of Emily and Andrew, and send them as a thank-you after an event rather than arriving with them at the beginning of a party.  A gift of flowers is a delight indeed, and even more delightful when it is delivered to the recipient when he has the leisure to enjoy them.  And that means after the party.

All photos by Boy Fenwick
Posted by Reggie Darling at 12:22 AM