Guest Post: Lisa of "Privilege" On Her Princeton 25th Reunion

Note: This post was supposed to have been posted on Monday morning.  Unfortunately, it did not make it out as scheduled, which is entirely Reggie's fault.  Here it is:


“Privilege” has long been one of the blogs that I check in to regularly to follow the writings and observations of its author, Lisa.  I was initially drawn to her blog by her description of it being the musings of a High WASP, with a point of view that such a vantage point provides.  However, what keeps me coming back for more is that Lisa doesn’t only focus on the “glory days” of our shared people's heritage, but rather looks forward, embracing change—as we all must—while honoring the past.  It’s a good combination, I think, and something Lisa does with grace and humor.
One of the pleasures of blogging is that it provides the opportunity to exchange views with and occasionally meet fellow bloggers and commenters.  Recently, in planning a business trip to California, I realized that I had a spare evening in San Francisco, where Lisa lives.  So I contacted her and invited her to join me for dinner while I was there, and was delighted to have her accept my invitation.  We met at Zuni Café, a favorite restaurant of mine in the City By the Bay, and quickly fell in to an easy and spirited conversation where, at times, it was difficult to finish a sentence or complete a thought because we both kept exclaiming “Yes! I know what you mean, that’s exactly what I think about [fill in the blank]!”  Instead of meeting a stranger, I felt as if I were getting together with a long-lost friend or cousin where we were able to pick up the thread of conversation right where we had left off years ago, as if the intervening years had never happened, our mutual language and vocabulary intact.
Over dinner Lisa and I hatched a plan to guest post on each other’s blogs, with the subject being college reunions, and our own 25th reunions in particular.  Herewith, Dear Reader, please find the guest post that Lisa has written about attending her 25th reunion at Princeton.  It is funny, charming, and thought-provoking—just like its author.  Once you've read it, please do link over to her blog, and read mine. 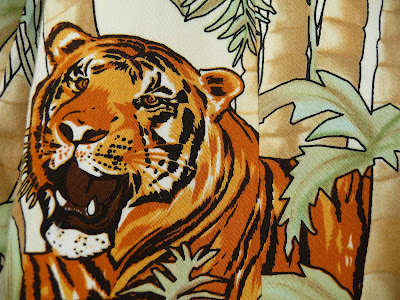 On May 27th, the masses gathered.  I sat on my sofa, writing to you all.  But across the country, my orange and black cohort gathered.  And wore really silly clothes.

Oh, wait, please excuse me.  I have forgotten my manners, overcome by visions of Tigers in umbrella hats.  Hello.  Nice to meet you.  My name is Lisa, and I write a blog called Privilege, where I natter on about style, rapture, and the High WASP culture.  Last month Reggie was so kind as to invite me to dinner in San Francisco.  We had a wonderful time, laughing, comparing notes, eating oysters.  Drinking gin martinis. 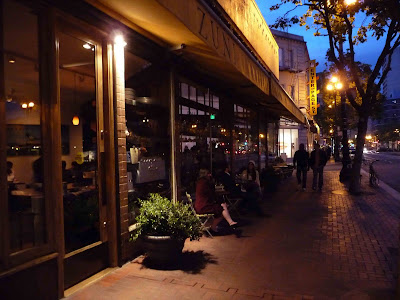 By the time dinner was over, we had agreed to exchange guest posts about our respective 25th college reunions.  Blame the oysters.  Or the martinis.  But forthwith, the story of a Princeton University 25th Reunion.  And some truly hideous pieces of apparel.

I graduated from Princeton in 1978.  And didn't attend a Reunion until 2003.  I didn't stay away out of hostility, or trauma.  I loved the place.  Just have never been much for large groups of people wearing orange hats.  Or beer.  I'd moved to California.  But the 25th was different.  We were exhorted to attend, friends were going, the timing was right.

I should have known what was up when this arrived in the mail. 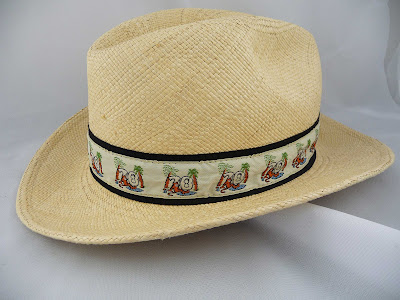 On the other hand, every class has their very own class uniform.  If you can use the word, "uniform" for outfits that include orange and black madras, rampant tigers, or other graphics in poor taste.

The Class of '78s jacket was even worse than the hat.  If only because it was bigger.  More tigers and extra palm trees. 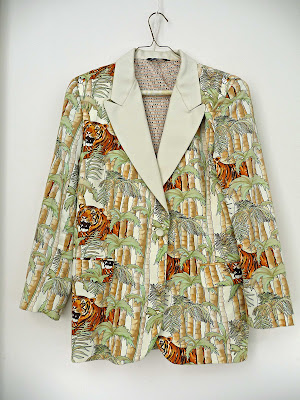 And off to New Jersey I went.

I imagine that everyone attending their 25th Reunion feels some combination of the following: (I have to communicate via a numbered list.  High WASPs are uncomfortable with emotion; lists make good containers.)
So I spent my days with wildly clever people, laughing at their banter and impressed by their accomplishments.  I wore my silly hat and jacket, giving up my High WASP aesthetic religion.  Whither clean lines?  Whither classicism?  I walked again on the paths between courtyards where thousands of students have walked.

Everything paled in comparison to the P-Rade. 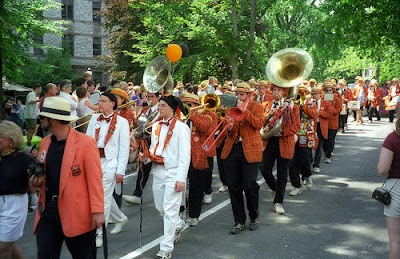 Princeton Reunions culminate in a P-Rade.  All the classes gather at the top of Princeton's campus, in a long column, dressed in those silly costumes.  The Princeton band leads the crowd, along with the oldest returning alumnus.  For now, it's the oldest 'nus.  Eventually I suspect, given statistics, it will be a 'na.

Although the P-Rade sends the classes down campus mostly in order, oldest to youngest, the 25th Reunion class gets to go first.  This is almost certainly because historically we are the largest donors.  No matter.  Going first was wonderful.  Wonderful because the rest of the classes, as they wait to make the walk, line the P-Rade path.  So the 25th walks, with the oldest classes cheering us as we start, all the way down the campus, to where finally the entire graduating class crowds around the green.  And cheers the P-Rading alumni.

Could have been terribly self-congratulatory.  Didn't feel that way.

I remember starting to parade.  Walking with women I had known for over 25 years.  Band playing. Light rain falling.  To either side, men in orange blazers of one sort or another.  At the top of the hill they were all white men.  Then some Asians, some African Americans.  Then women. It felt pretty good to see the first groups of women.  We were only the 5th year of co-education.  Old habits die hard.

As we rounded some gray stone curve or other, the view widened.  And there was the class of 2003.  All 1,000 of them.  The Reunion blazer had morphed to a karate jacket, still orange and black, still tiger-infested.  Rainbow Coalition banners waved.  It kept on raining.  But I had a moment where one's heart rises in one's chest with hope.

I know all is not perfect in meritocracy heaven.  Still in America some children are brought up in ways and situations which preclude going to a place like Princeton, even if they might otherwise have flourished there.  But this LA Times article on High WASPs and the Supreme Court says it well.  Please us put aside the mention of ethnic superiority as a terrible vestige of a less-evolved time.  That's an old way of thinking, and impolite, besides.


"Yet, the British sociologist Eric Kaufmann observed, the Yankee sense of ethnic superiority often competed with their belief in universalist liberal ideology — equality, liberty and human rights.  One way that worked itself out is that non-Yankees could aspire and acculturate to the Yankee norm and ideal — by gaining entrance to their schools primarily, but also by joining their churches, appreciating their art forms and imbibing their ideas, adopting their aesthetic." (Gregory Rodriguez, Los Angeles Times)

My sister and I believe, and Reggie agreed with me so readily I feel we must be right, President Obama is a High WASP.  A High WASP in the world of 2010.

It may not be fashionable, or High WASP approved, to feel moved by thoughts of opportunity.  Possibly we who live in privilege ought to spend all our days atoning; but I think one can be a patriot and still believe much of the change over the last half century has been for the good.  Except the part where it's OK to show your stomach in public, and, yes, I'm queasy about eyebrow piercings, but still.  Evolution can take us forward.

In fact, you could argue that the American education system is the absolute best thing about our country.  I concede, however, the hats are dreadful.