A Beach Chair Revival, Part I

I like old-fashioned beach chairs from the first half of the 20th century, the folding wooden ones covered with colorful, striped cotton awning fabric.  I much prefer them to today's cheaply made, mass-market beach chairs, made with powder-coated aluminum frames and covered with plastic webbing or mesh.  I find most of today's options, and certainly those available at big-box retailers, to be ugly and degraded.  But then, that shouldn't come as a surprise to you, Dear Reader, since Reggie is a self-avowed old fogey when it comes to these things. 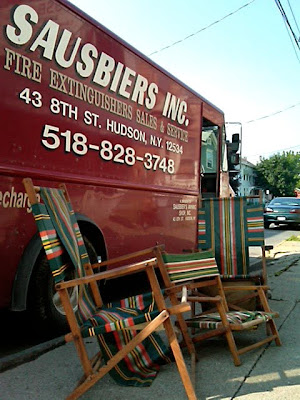 Boy and I have collected a number of old-fashioned awning-covered folding chairs over the years.  And we use ours for one of their original purposes--at the beach.  We took some with us to Block Island several summers ago when we spent a vacation there, and we enjoyed sitting on them at the ocean's edge.  It all seemed so classically New England and beachy, in a 1940s sort of way.

Originally sold at hardware stores and awning shops for use at the beach, at picnics, or when camping, vintage awning-covered wooden folding chairs can be found today at antiques fairs and group shops, and also at tag and yard sales.  We've bought ours at the latter, rarely spending more than $20 a piece.  Their one drawback is that--unlike today's throw-away versions--they do require maintenance every now and then.  The frames can get rickety, and thus need tightening.  Also, cotton awning fabric weakens over time, particularly when such chairs are stored in barns and garages for fifty or more years, and the fabric rips, and so needs to be replaced.  The awning fabric on several of ours had given way, and they were no longer usable. 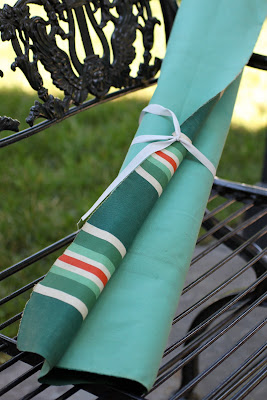 In anticipation of an upcoming beach vacation later this summer, I decided to replace the ripped awning fabric on our useless chairs, so that we could enjoy sitting on them again.  Although I had recently found (and bought) some yardage of vintage awning fabric for this very purpose, I decided upon reflection not to use it when replacing the fabric on our chairs, because I suspected that it, too, would soon split, given its age. 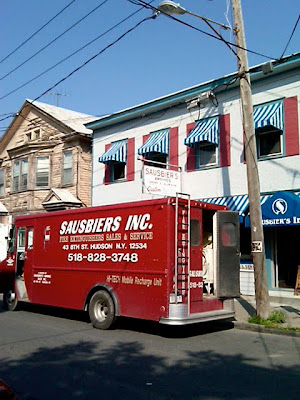 So we visited Sausbiers, Inc., a family-run awning (and fire extinguisher servicing) shop located on a side street in Hudson, New York, where we selected new Sunbrella awning fabric for our beach chairs, and arranged to have them remade before we leave for the shore.  (Note: "Sausbiers" is pronounced "sauce-beers" and not "soas-bee-aye" as we once thought.) 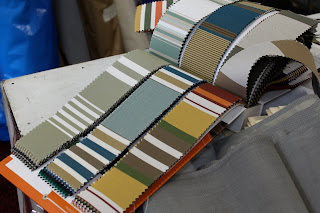 While the fabric that is available today for such projects is made from synthetic material, and the selection isn't as attractive (or extensive) as what one could buy half a century ago (is anything?), it is stronger and sturdier, and far less likely to split or rip than if it were made from mercerized cotton, as it once was.  We selected a colorful striped awning fabric from the swatch book at Sausbiers for our chairs, reminiscent of their original stripe, and left them to be recovered.

I'm planning on posting pictures of our revived beach chairs after I pick them up.  Stay tuned for the end result . . .

All photos by Boy Fenwick
Posted by Reggie Darling at 11:00 AM