Lest you think, given the previous three installments in this series, that Reggie admires only rooms decorated in styles predating the turn of the 20th century, today's essay is about a favorite room that was decorated not only well in to that century, in the 1930s, but done up in a manner that could only have occurred after the advent of modernism.  It is a room that has much to recommend it, I believe, and there is much to be learned from it, too.

The room in question is the library in the Lake Forest, Illinois, house of Mr. and Mrs. Leslie Wheeler.  Designed by David Adler (1882-1949), one of the greatest residential architects of the first half of the twentieth century, the room was decorated by his equally talented sister, Francis Elkins (1888-1953), with whom he collaborated extensively.  What an exceptional team they were, this superbly gifted brother and sister, and how lucky we are that so much of their work was photographed (in the case of this room, in 1934) and recently published in books by Stephen Salny and the Art Institute of Chicago. 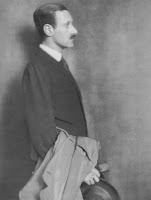 David Adler in 1904                           Francis Elkins in 1938
I first came across David Adler's work, and the Wheeler library in particular, in the early 1980s when leafing through the pages of an out-of-print monograph on the architect that belonged to my dear friend George Pinckney, a fellow appreciator of traditional architecture.  Looking for the first time at the photographs of the Adler houses featured in the monograph was an astonishment for me.  Not only had I never heard of the architect, but I had also never seen such a concentration of handsome, well-appointed houses and interiors of the featured period, and all by the same hand.  At the time, I was certainly familiar with the work of McKim, Mead and White, as well as other illustrious architects of their and earlier eras, but this was the first time that I saw a book with the work of an equivalent master of traditional residential architecture of a more modern and, for me, accessible period.  Lots of books were available at the time featuring the twentieth century work of the masters of the International style of modern architecture, but little had yet been published on the work of their then less-celebrated, classically-inspired counterparts.  This has only been remedied more recently, in the last fifteen or so years.


Written by Richard Pratt and published in 1970, the monograph is David Adler: The Architect and His Work.  It was and remains much sought-after by collectors, libraries, and practitioners of traditional (or classical) architecture, as it was the only book on Adler and his work available until recently.  It was, as it turns out, a very valuable book, too, and could only be had at a price that reflected its rarity and the fevered demand for it.  Looking through it for the first time I was determined to own a copy of it, but I was only able to do so many years later when my pocketbook could support such an extravagance.  It remains to this day one of the treasures of our book collection at Darlington House.


The Wheeler library is a room that I return to again and again in my mind's eye, as it is not only a handsome room, but the stuff of fantasy for me: a special-purpose room dedicated to the pleasures of reading, set apart from the owners' other sitting and entertaining rooms.  We have a room at Darlington, which we call our Snuggery, that holds many of our books; but I would not say that it is a library, per se.  For our Snuggery is not the sole repository for our books, which are scattered throughout our house in bookcases and piles, and in it resides, also, our lone television.  Frankly, we use our Snuggery more as a cozy, personal sitting room than we do as a place to read, contemplate, and study books.  I would be thrilled to live in a house that had an actual library, such as the one the Adler/Elkins duo created for the Wheelers.


So, what is it, exactly, that I so admire about the Wheeler's library?

Finally, the Wheeler library channels for me on a very personal level a number of academic libraries that I spent many pleasant hours in years ago, first as a student at Sherborne School, a boys' public school in England, and later as an undergraduate at Yale.

Unless noted, all images are courtesy of Francis Elkins: Interior Design by Stephen M. Salny, published by W. W. Norton & Company.  Additional images of the talented Adler/Elkins partnership can be found in Stephen M. Salny's The Country Houses of David Adler, also published by W. W. Norton, and in the Art Institute of Chicago's David Adler, Architect: The Elements of Style, published by the Art Institute in association with the Yale University Press.
Posted by Reggie Darling at 10:47 PM