Last weekend, while out doing errands, we stopped in at a big, up-county antiques group shop where we came across a large and handsome part service of old Paris porcelain, circa 1850-65. 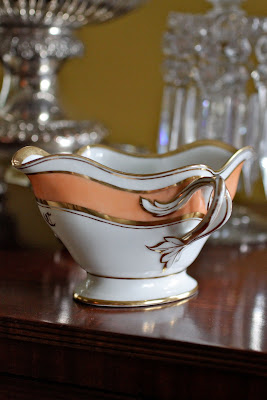 After debating its merits, and then negotiating with the dealer for an excellent price, we left the shop as the china's proud owners.   However, we left empty-handed because it was shortly before closing time, and the service needed to be wrapped and boxed in order for us to take it home.  We returned to the shop on Friday afternoon, picked up four boxes of the carefully packed china, and drove to Darlington. 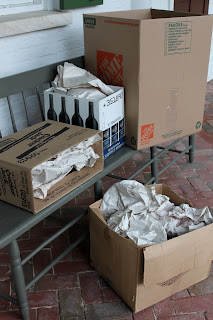 After we got home we unwrapped the china and culled it of the two dozen or so pieces that were chipped or cracked, retaining seventy-odd pieces that were in perfect condition, albeit with some wear to their applied gilding. 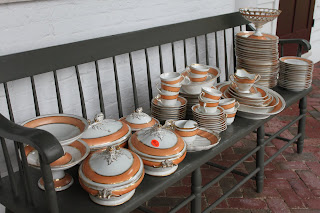 This was a well-used set of china in its day and bears evidence of its regular appearance at prior owners' tables.  However, it clearly hadn't been used in many years, and was--as they say in the trade--filthy dirty.  It took me an hour and a half of steady work at a sink full of hot sudsy water to thoroughly wash the grime off of the pieces we kept. 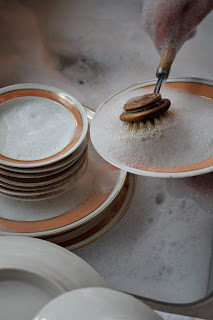 As many of my readers well know, Paris porcelain (sometimes referred to as "Old Paris porcelain") is the name for a type of white porcelain china produced in France from the late Napoleonic era through the end of the Second Empire, or from around 1815 through 1870.  Much of it was produced as unmarked white-wares or blanks at Limoges, and then sent on to independent decorating shops in and around Paris (among other places) where it was then painted with colored ornamentation, banding, and gilding.  The porcelain was a popular export-ware, with millions of pieces sent around the globe.  In this country, Paris porcelain achieved its peak popularity in the decades leading up to the Civil War, when every middle-class American housewife aspired to owning a set. 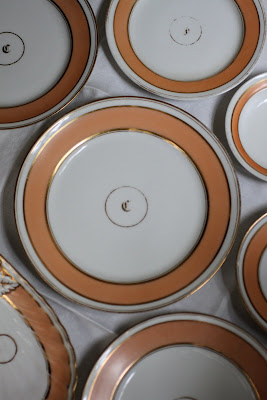 I have always liked Paris porcelain, and we had rather a lot of it in my household when I was growing up, much of which had been passed down from my mother's grandparents.  I own some of it today. 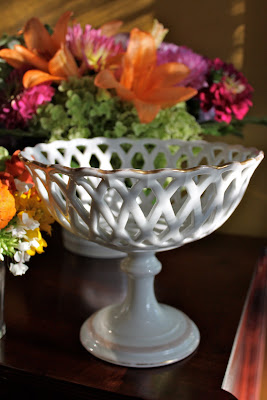 A piece that once belonged to my great grandmother
Since buying Darlington House, Boy and I have added to the Paris porcelain I inherited, and we have dozens of simply decorated dinner and dessert plates that we use for large parties, a number of decorative urns, footed compotes and reticulated baskets, and a quantity of serving pieces.  We like it because it is honest, decent-quality stuff, is readily available, and usually quite reasonably priced.  One can pay a lot of money for Paris porcelain, but one doesn't have to, particularly if one keeps an eye out for it in offbeat places.  Not too long ago it was relatively easy to find large sets at less than ten dollars a plate. 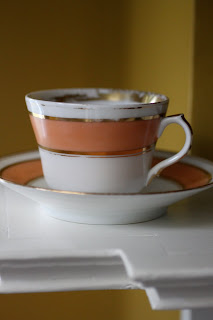 The service we bought last weekend is quite extensive, including dinner, soup, dessert, and incidental plates, plus three covered serving dishes, half a dozen platters, serving bowls, cups and saucers, and more. 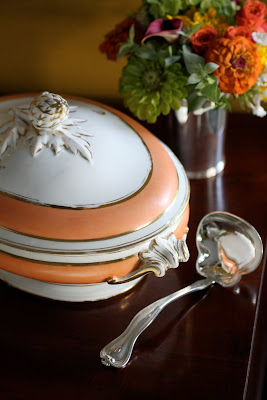 It also includes what I believe is an invalid cup.  Initially that struck me as rather odd, but upon reflection made sense to me, since illnesses that confined the afflicted to bed for long stretches at a time were much more prevalent in the mid-nineteenth century than they are today. 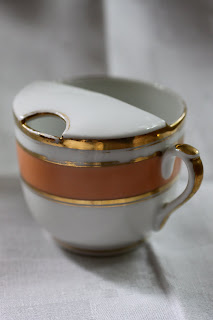 The set we bought is decorated with a peach-colored banding and applied gilding.  In general, I'm not crazy about the color peach, except on the actual fruit, as it was a much overused color in the 1980s.  However, I actually like that the porcelain we bought has peach-colored banding, now that we've brought it home. 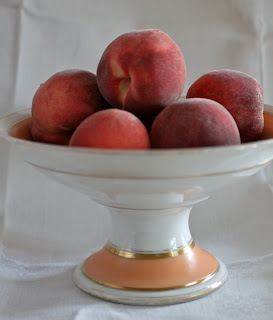 In addition, the service is decorated with the letter "C" in an Old-English font that is identical to one that appears on a large set of silver I inherited that once belonged to my great-great uncle Augustus Bertram Coolidge (known as "Uncle Bert"), that was given to him 100 years ago in recognition of his service as Grand Master of the District of Columbia's Masonic Grand Lodge.  Nice coincidence, yes? 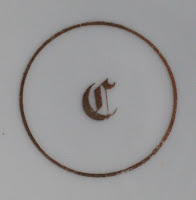 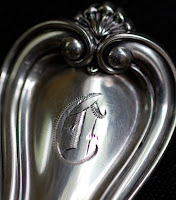 We inaugurated our "new" Paris porcelain china on Saturday at a small luncheon party at Darlington.  As it turns out, the guests we entertained also have a collection of peach-banded Paris porcelain, and it was an enjoyable gathering of jolly fellow travelers, with much to jabber about. 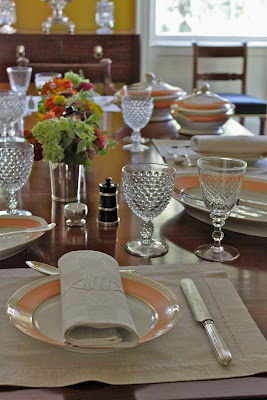 We served a classic country summer meal (supplied to us by our most-beloved caterer) of fried chicken, potato salad, and cole slaw, followed by chocolate devil's food cake and vanilla ice cream.  It was delicious, and the perfect repast on a hot July afternoon.  As I sat at our attractively laid table, talking with our guests and enjoying the lunch, I felt a connection with those who had owned the china before us, for certainly such a meal had been eaten off of it many times in such a dining room as ours in its 150 years of existence.  And will be again, I believe, long after we are gone.

All photos by Boy Fenwick
Posted by Reggie Darling at 1:22 PM