Reggie is of the old-fashioned school that refers to the day after Christmas as Boxing Day.  With a straight face.  The origins of that term are somewhat shrouded in the mists of time, but the conventional wisdom is that the "box" in Boxing Day refers to the custom in England, in days gone by, of the gentry giving boxes of Christmas leftovers to those less fortunate than they.  At Darlington House, the "box" in Boxing Day more accurately refers to the custom Reggie follows on the day after Christmas of cutting up the myriad cardboard cartons that appear during the holiday and tying them up with twine for recycling. 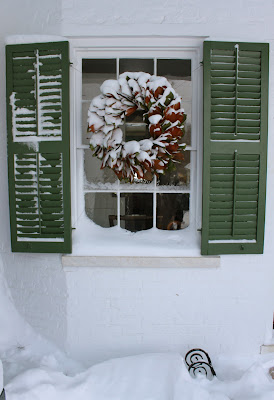 We had planned a small cocktail party on Boxing Day this year, but Mother Nature made a fool of that idea by delivering a blizzard of heavy snow and perilous driving conditions, and so we wisely canceled the party only an hour before it was scheduled to begin.  By that time we were mostly done with our preparations and had dressed for the party.  So, instead of serving our guests the cheese biscuits and baked ham that I had made that afternoon we consumed a portion of it for our supper.  And rather than drink homemade eggnog, which was on the menu as the House Libation for the party, we downed a couple of martinis each—one needn't be a scintillating conversationalist with one's spouse under such circumstances.  Besides, martinis don't pack the same calorie explosion as eggnog does and so are more helpful in aiding one's post-Christmas slenderization efforts . . .

One of the pleasant side effects of throwing a party is that it spurs one to tidy up the disarray of the house ahead of time, and we had already completed this task by the time our putative guests started phoning in their regrets.  Reggie is rather happy that Darlington House is in better order now than it would have been had the party been canceled earlier, before we had finished our organizing and putting away of things before our guests' arrivals.  Even though it was a disappointment to have to cancel the party, Reggie is pleased to have a tidy, well-ordered Darlington House and a fully stocked kitchen and bar.  Not so bad, really.


It snowed heavily all night, and I woke this morning to a wintry world outside my bedroom window that reminded me of the scene in Dr. Zhivago where they arrive at their ice-encased country house, "Varyinko," after fleeing Moscow:


We've had almost two feet of snow here in the Hudson River Valley in less than twenty-four hours, and blustery winds are blowing the snow about today in spectacular drifts.  I haven't seen such a storm here in many years, if ever. 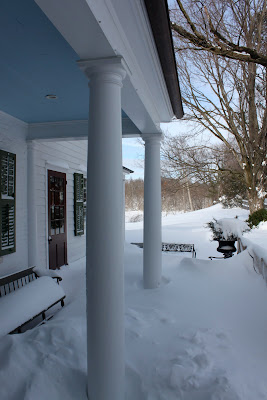 The only reason one even considers venturing out of the house in such conditions is to allow dear Pompey a quick constitutional.  As I've written before, Pompey is a cream puff and hates going outside when it is wet or cold. 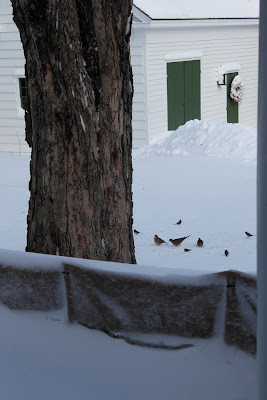 Thank goodness Pompey's got with the program after all these years, and one no longer need stand in the freezing cold, encouraging a miserable and reluctant pug to do his "business," with the snow swirling about.  Pompey knew exactly what to do this morning, and we came back inside the house pronto!

All photos, except where noted, by Boy Fenwick
Posted by Reggie Darling at 2:51 PM