A Pleasing Portrait in Miniature

Reggie has always had a weakness for little things.  By that he means that he is drawn to diminutively scaled versions of what one usually sees on a larger, or life-size scale.  It can be a painting, a piece of furniture, a topiary, or a book—pretty much anything, really.  It could be something that was made "in little" as a keepsake, or as a toy for a child, or just because.  And Reggie is not alone in having a fondness for such things, either, at least in his own immediate family where he and his sisters, Hermione and Camilla, share a similar propensity.

Over the next several months I plan on posting examples of some of the diminutively scaled pieces that we have at Darlington House.  Initially I will concentrate on paintings, other works of art, and objets de vertu, and then I'll see where it goes from there. 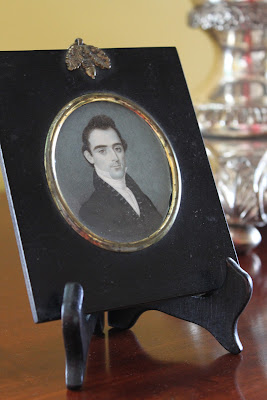 The subject of today's post is a miniature oval portrait of a young man painted sometime during the first two decades of the nineteenth century, a period where I focus much of my collecting.  I came across the portrait at an antiques show in Rhinebeck, New York, eight or nine years ago.  I was immediately drawn to it and had one of those visceral, I must have it reactions that you, Dear Reader, will be familiar with if you read a recent post I wrote about my acquisition of several Chinese export porcelain plates at this year's New York Ceramics Fair. 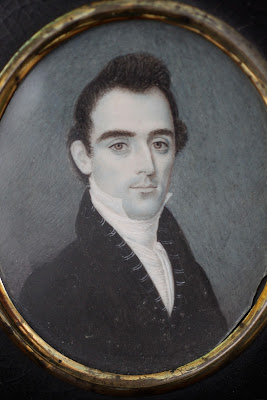 The subject of the portrait is unidentified—just as the young lady was in the photograph that I recently posted of a forgotten ancestress of mine.  While I have always assumed that the portrait I own is American in origin, in studying it while writing this essay I now think that it might well have been painted in China by a Chinese artist and that the sitter may well be an American merchant who was engaged in the China Trade.  Whoever painted it was clearly trained in his craft and extremely talented at it.  The likeness is painted with delicate, nearly microscopic brush strokes on ivory in an attenuated, almost Mannerist style.  Over the years the painting's red pigment, the most transitory of all pigments, has faded, and the picture now has an ethereally blue cast to it, reminiscent of Picasso's blue period or certain Medieval paintings.  Well, not really, but you get the references I'm sure.


The painting is framed in its original black lacquered papier-mâché frame, with a gilt brass hanging ring at the top and a small spray of cast oak leaves and an acorn.  Just as the frame is severely and plainly black, so is the sitter's jacket and hair, which is styled in a jaunty pompadour hairstyle fashionable at the time.  He wears a high-necked white collar encircled by an expertly tied neckerchief, and his black jacket and white shirting sets off his pale, refined features perfectly, as does the painting's gray background.

The miniature portrait is, indeed, a most pleasing one and portrays an interesting and attractive subject, beautifully and subtly executed.  I am most fortunate to have it.

Photography by Boy Fenwick
Posted by Reggie Darling at 8:26 AM