Reggie Out & About: An Embarrassment of Book Signings

The other day, while idly sitting at my workaday desk and daydreaming when I should have been doing other more productive things, I realized that Boy and I had been to rather a lot of book signing parties this past autumn and winter.  Toting them up in my head, I counted that between the two of us we had attended six of them. 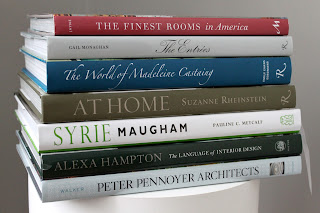 As far as I can tell, there was an explosion of new design and decorating books published in the months leading up to the holidays.  One hears dire stories that book publishing as we know it is on its last legs, under siege from the likes of the Kindle, downloads, and blogs.  While electronic media is, indeed, changing the way many of us gather and share information, I seriously doubt it will ever fully supplant physical books, and that glossy, picture-filled decorating and lifestyle books are probably the least vulnerable publishing category for inroads from same.  That is, if the avalanche of that type of book published in the latter part of 2010 is any indication.

Here's a tour of the books we acquired this winter while traversing Manhattan's book signing circuit: 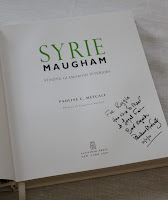 The first party we attended was for Pauline Metcalfe's Syrie Maugham, Staging Glamorous Interiors, published by the Acanthus Press.  Held at Liz O'Brien's ultra-chic gallery on the UES it was an absolute crush.  Ms. O'Brien had gone the extra mile for the party, filling the rooms with gorgeous flower arrangements inspired by those of the English plantswoman extraordinaire, Constance Spry, whose arrangements filled the houses and smart apartments Mrs. Maugham decorated in the day.  Ms. Metcalfe inscribed the book "For Reggie: How nice to meet a loyal fan" which is how I had rather tongue-in-cheekedly introduced myself to her, as I have another one of her books, Ogden Codman and the Decoration of Houses, in my collection and which I consult regularly.  I attended a book-signing party for that book, too, when it was first published, long ago, and also had it autographed (then) by its authoress. 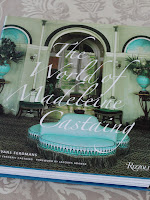 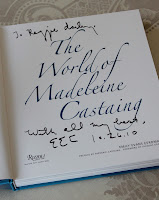 The next book signing we went to was for Emily Evans Eerdmans' The World of Madeleine Castaing, published by Rizzoli Press.  It was a very swell, well-attended party full of fashionables, and was held at the International Antiques Show at the Park Avenue Armory, where the party was sublimely—and lavishly—catered by Glorious Foods.  Fabulous!  EEE looked particularly glamorous that evening and was wearing her signature—or is it trademark?—green gloves when graciously receiving her adoring public and signing copies of her hotly-awaited monograph of the highly-influential, bewigged French antiquaire.  Our copy joins the other autographed books we own by Ms. Eerdmans, including her delightful Regency Redux, which was a publishing sensation when it came out in 2008. 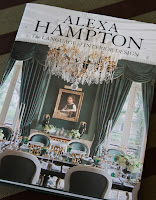 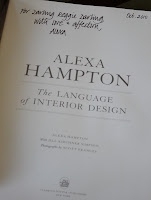 I missed the book signing for Alexa Hampton's Alexa Hampton, the Language of Interior Design, published by Clarkson Potter.  Held at John Roselli's antiques-packed galleries—in the same building as Liz O'Brien's gallery—Boy attended the party with his assistant Clarissa Montgomery.  Boy said that Ms. Hampton was charming and gracious, which is just how I remember her from when I met and spoke with her at a cocktail party half a dozen years ago.  Reggie is quite pleased that she inscribed the book to him, and notes with appreciation Ms. Hampton's beautiful handwriting. 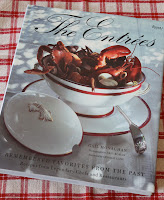 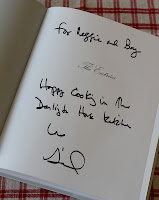 As I wrote in my earlier post featuring cookbook author, chef, and bon vivant Gail Monaghan, Boy attended a book signing celebrating the publication of her newest cook book The Entrees: Remembered Favorites From the Past: Recipes From Legendary Chefs and Restaurants.  I was, unfortunately, not able to attend the gathering, held at the Rizzoli flagship store on 57th Street, as business had called me away to South America the day of the party.  Fortunately, Gail was willing to inscribe our copy to the both of us, even though I was absent.

And absent I was, again, I am afraid, at the book signing party for Thomas Jayne's The Finest Rooms In America, published by the Monacelli Press.  The book signing was held at the dangerously tempting Archivia Books on the UES, and was—I understand—very well attended.  I first met Mr. Jayne more than a decade ago when we both attended an Antiques Forum held at Williamsburg, and he is a particularly charming fellow.  And he's a rather tall fellow, too! 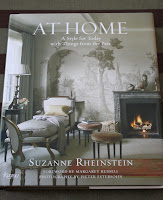 Fortunately, I was able to attend the book signing party held in December for Suzanne Rheinstein's At Home: A Style For Today With Things From the Past.  The party was held, again, at the John Rozelli antiques gallery where the Alexa Hampton party took place earlier in the season, and in the same building as Liz O'Brien's gallery.  The party was packed with what I have come to appreciate as all the usual suspects, plus many friends and acquaintances of the book's charming author, who—I was delighted to learn when speaking with her—is a sometime reader of this blog!  I particularly liked her inscription, "Restraint is worth it!" a view we share in common as it turns out. 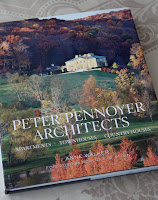 But there is one book signing party that eluded Reggie this season, which was for Peter Pennoyer Architects: Apartments, Townhouses, Country Houses.  Published by Vendome Press and written by Anne Walker, Mr. Pennoyer's co-author with several other books on architecture, this is a lavish celebration of the architect's gorgeous, classically-inspired creations, and a book that I have spent many delighted hours pouring over.  There were several parties held to celebrate its publication that Reggie was invited to in the city, but neither he nor Boy were able to attend any of them, due to rather tiresome conflicts, and Reggie's copy of the monograph remains uninscribed by its distinguished subject.  Reggie does hope to find himself in such close proximity to Mr. Pennoyer one day as to have the book inscribed, or at least autographed.  But for now, at least, it remains an unsullied tome amongst his more besmirched volumes.

Tell me, do you—like Reggie—seek to have your books inscribed by their authors, or do you prefer to leave them clean of such scribbles?

All photographs by Boy Fenwick
Posted by Reggie Darling at 7:56 AM

Labels: books, notable people, out and about