Does Anyone Know What These Are?

I would appreciate your assistance with something, Dear Reader.  I am in a bit of quandry, and I cannot—despite my best efforts—resolve it.  Many years ago I bought a pair of earthenware figures that have some sort of functional purpose that I have not been able to determine, at least definitively.  I've consulted books and reference materials, I've asked specialists, and I've nosed my way around museums and collections, but it has all been for naught.  Can you help me, please? 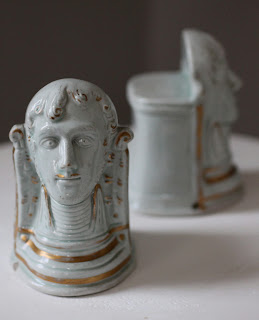 I bought these figure heads in a group shop where the (absent) dealer had them marked as "window supports," supposedly used to prop open windows to allow fresh air into a room.  I've also seen them referred to as furniture supports. 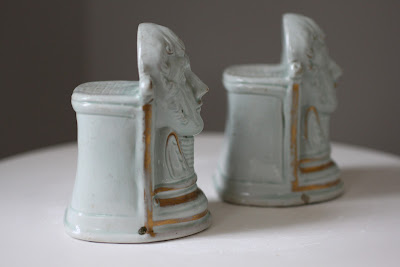 Neither of these descriptions makes sense to me, though.  I suspect they were made for some other purpose, but what it is I have not been able to ascertain.  Do you know what they are?


My little fellows are, I believe, English Staffordshire pearlware figures.  I suspect they are commemorative images of Prince Albert of Saxe-Gotha, and were made in or around 1840 at the time of his marriage to Queen Victoria. 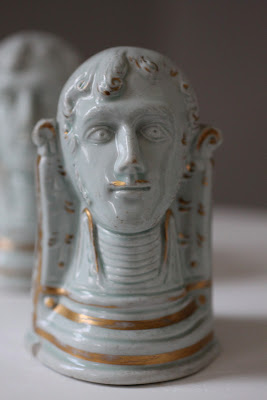 When I brought them home I opened a window to try them out as window supports, but when I did so I realized they are the wrong shape for that supposed purpose.  In order for them to function effectively as window supports, the frames of the windows would need to be constructed without the interior weather stripping that all windows (at least those that I am familiar with) have.  Such weather stripping is not a modern, energy-saving convenience—our window frames at Darlington House are original to when the house was built in 1817.  Were window frames made differently in England? 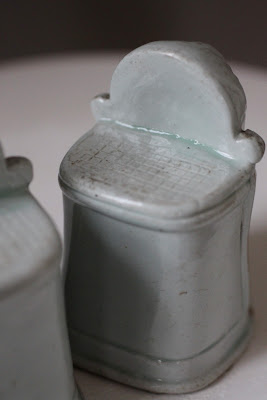 They were clearly made to hold something.  The top has cross-hatching on it to help stabilize whatever it was they held.  I suspect they may have been originally intended to hold potted plants, either in terracotta pots or cachepots, and would have been sold in groups of three or four for that purpose.  Related examples are available today, in terracotta.

Any guidance or thoughts that you may have would be greatly appreciated.

All photographs by Boy Fenwick, except for the one of the terracotta pot foot, which is courtesy of mygardengoddess, whose site on Etsy can be found by clicking on the link above

Posted by Reggie Darling at 7:42 AM