A Fine and Pleasing Silhouette

Over the years I have collected a fair number of silhouettes.  I like the way they look, they are readily available at antiques stores and fairs, and they are generally well priced.

For the possibly lone person reading this blog who is not familiar with the term, "silhouette" is the name for a type of highly graphic, representational image, most often (but not always) a portrait of a person in profile, where the subject is featureless and usually done in black (most often cut from paper or card) and mounted on a lighter background.  Silhouettes were a quick and inexpensive means of taking a sitter's likeness before the advent of photography, and were popular in America from the late-eighteenth century through the mid-nineteenth century.

I first started collecting silhouettes shortly after we acquired Darlington House, in the late 1990s.  Initially I was fairly indiscriminate in the silhouettes I bought, driven more by impulse than connoisseurship.  Over time, though, as I became more knowledgeable I also became more selective, focusing my buying on unusual and skillfully executed ones, in interesting period frames.

Although I still stop and admire silhouettes when I am out and about visiting dealers and shows, I only rarely buy them anymore.  I realized a number of years ago that I was on the verge of having more silhouettes than I knew what to do with.  As in all collecting, it is possible to find oneself with too much of a good thing if one isn't disciplined in one's buying.  So I put on the brakes and diverted my collecting attentions elsewhere. 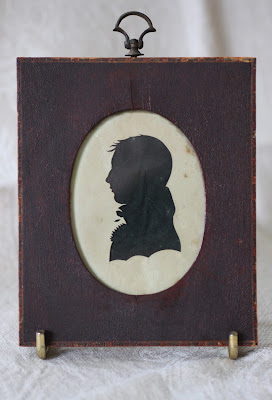 One of the last silhouettes I bought is, I believe, the best in my collection.  If I had to choose only one of the silhouettes I own, this is the one I would reach for.  It is a beautifully and artistically done likeness of a young man that sits in an unusual and rare Federal-era frame.

I don't know who the artist was who cut the likeness (it is unsigned), but they were exceedingly skillfull at their craft, and the quality of their scissor-work is far superior to any other in my collection.  Whoever did it was a master (or mistress) at their art.  I bought the silhouette from an antiques dealer in western Massachusetts who said that he had bought it at a local auction.  That's all I know about its history or provenance.

Judging from the sitter's clothes and the style of the frame, I suspect that the silhouette was done in the first quarter of the nineteenth century, the heyday of silhouettes' popularity.


The frame is an unusual one.  Most silhouettes that I see are framed in lacquered papier-mâché frames, similar to the frame of the miniature painting of what I suspect is a China Trade merchant that I posted about recently.  I've also seen silhouettes that are framed more conventionally, in square or rectangular wood or metal gilt frames.  I'm not aware of seeing one framed as this young man is, though, in an entirely wood, flat frame made of mahogany and decorated with an inlay border around the perimeter.  Given its quality I suspect the frame was made by a cabinetmaker, which would explain why it has a particularly fine hanging hook on it as opposed to a more conventional and plainer hanging ring seen on picture frames of this period.  The frame appears to be in its original, untouched finish.  Although I think it would look better if I had it refinished—the surface has darkened and dulled considerably over time—I am going to leave it just the way it is, for reasons that are well known to those of us who watch Antiques Road Show with any regularity.

All in all I am quite pleased to have this little silhouette, and I feel most fortunate to own it.

Tell me, do you own any silhouettes?

Photographs by Boy Fenwick
Posted by Reggie Darling at 7:43 AM