Well, this was New York's Antiques Week, with sales and auctions all over town.  Between the two of us, Boy and I visited most of the shows and also previewed the Sotheby's and Christie's auctions.  One of the handiest guides I've found for planning one's busy schedule during Antiques Week is a program blessedly published each year by Stella Management, which manages two of the shows:


This year was not a big buying year for us, and from the looks of things and what we heard from others out and about during Antiques Week, we were not alone.

Our own reasons for increased selectivity, if not parsimony, this Antiques Week were due to several factors.  The first was the frank acknowledgment that Darlington House is, in fact, already packed to the gills, with every one of its shelves, tables, walls, closets, and cupboards jammed with objects, china, paintings, and more.  There simply isn't much—if any—room left for any more stuff.  The second reason is our household's increasingly conservative financial outlook due to the unsettling—and continuing—volatility and uncertainties of the global financial markets.  We've been clamping down lately on unnecessary expenditures beyond housing, transportation, and sustenance, and limiting what extraneous purchases we do make to "little-ticket" items. 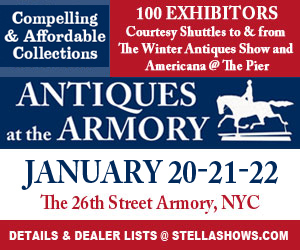 But Antiques Week in New York is something that is not to be missed for us, and attending the shows is a professional requirement for Boy because, as a high-tone New York City decorator, he must always be on the lookout for his clients' needs.  That being said, we approached the shows this year with the mandate to keep our personal pocketbooks firmly clasped (as I also vowed to do last year, albeit ultimately unsuccessfully, as I related in an earlier essay), and only to pry them open if confronted with what we both immediately agreed was an absolute "must have"—defined as being something we already collected (i.e., no new ground to be broken here) and where the failure to add the object to our collection would be considered a loss, once the opportunity had passed us by.  Oh, and any contender had to be exceedingly well priced.


On Friday morning, at the Antiques at the Armory show (also known as the downtown Armory show to distinguish it from the far more expensive uptown Winter Antiques Show at the Seventh Regiment's Armory on Park Avenue), Boy spotted a pair of black basalt campagna-form urns at the booth of Mad River Antiques, of North Granby, Connecticut, moments after the doors to the show opened.  Standing ten inches tall and decorated with Arcadian figures in classical dress, the urns are stamped WEDGWOOD and ETRURIA, and also with the letter P.  Based on these identifying marks we determined that the urns were made prior to 1891, when the word ENGLAND was first added to the Wedgwood mark.  We further pinpointed the exact year they were made as being either 1861 or 1887, the only two years that Wedgwood used the letter P to identify when a particular piece of pottery was produced.  ETRURIA refers to Wedgwood's pottery factories in Staffordshire, England—the Etruria Works—where the urns were made. The Etruria Works opened in 1769 and closed in 1950.


The basalt urns Boy acquired are missing the lids that originally surmounted them.  The lost lids would have been similar to the one seen on the modern jasperware urn shown in the above photograph.  I hasten to add that Boy and the dealers were all well aware of this fact.  While it would have been awfully nice to have the lids for our urns, I suspect that we would likely not have been willing to front the necessary funds to acquire them, as the presence of such lids would have supported a selling price much higher than Boy ultimately paid.

I have a great fondness for black basalt, Dear Reader, and have collected it for more than thirty years.  I love the severity and vigor of it.  Our "new" basalt urns are a marvelous addition to our collection, I believe, and will be appropriately pride-of-placed on the chimneypiece in our dining room at Darlington House, where they will stand between the gilt bronze and crystal girandoles I wrote of recently.  Bravo, Boy, for finding them!


Also at the downtown Armory show, Boy found this diminutive (it measures only 4½ inches high by 5¼ inches wide) framed print of George Washington at the booth of Andrew Spindler Antiques of Essex, Massachusetts.  As readers of this blog may know, we have a collection of Washingtoniana at Darlington House, where this pleasing little image of the Father of Our Country, probably dating to the Centennial era, will be a delightful addition.  It was very attractively priced and is what both Boy and I agreed was a "no-brainer" when our criteria for buying during Antiques Week were applied. This year we came away empty-handed at the New York Ceramics Fair and the Metropolitan Show (a new incarnation of what had been known as The American Antiques Show until this year), both of which have been fertile hunting grounds for us in the past.  So far we've not attended the Winter Antiques Show, the Granddaddy of Them All, but I suspect we shall roam its aisles one night after work this coming week, as it continues its run through January 29th.


On Saturday, at the Americana & Antiques at the Pier show, we captured this porcelain figure of a white leopard at the booth of J. E. Rider Antiques, who—like Andrew Spindler—also hails from Essex, Massachusetts.  We had to buy the leopard because it is virtually identical, save for the painting of its coat, to a figure we already own that is painted as a tawny-coated lioness, and which is shown—albeit blurrily—in the background of a photograph in an earlier post.  Just as was the case of the two early-nineteenth-century classical figures I wrote about recently, the leopard and the lioness could even have come out of the same mold, but are painted to resemble different cats.  Mr. Rider said that he believed the leopard was made in the nineteenth century, likely in France, in imitation of an earlier Meissen figure.  In looking the piece over I would agree with him that it was most likely made in the nineteenth century, but I have difficulty dating when, as such pieces were in constant production—in one form or another—from the eighteenth century up through the first half of the twentieth century, both on the Continent and in England.  In the end I agreed to buy the little leopard (it measures only 4 inches long by 2¾ inches tall) because I liked it, which is the most important consideration for me when it comes to such matters.  I plan on doing a future post in which I compare and contrast our "new" leopard with the lioness already in our collection.


After leaving the Pier show we celebrated our Antiques Week success of acquiring three "must haves"—without having lost our heads, unlike in previous years—by having a delicious and leisurely lunch of oysters, salmon burgers, and Sancerre at Orsay.  A favorite brasserie of ours, on upper Lexington Avenue, Orsay occupies the former site of the fabled Mortimer's that I wrote about a year ago in my review of Swifty's, also another great favorite restaurant of ours on the UES of Manhattan.

And so, Dear Reader, another year of New York's Antiques Week has come and gone for those of us (Pompey included, of course) fortunate to call Darlington House home.
Posted by Reggie Darling at 7:04 PM