Several weekends ago, while driving into the nearby town, I noticed a yard sale was being held at one of the grand houses in our village.  Even though I was a man on a mission and time was of the essence, I immediately pulled over and jumped out of the car, as this was a sale that was not to be missed!

The house in question has changed hands several times in the years since we've owned Darlington.  It currently belongs to a celebrated New York architect who uses it as a weekend house.  The yard sale was a group sale, organized by the architect and his partner, a former editor at a well-known lifestyle magazine, and their friends.  This was not your typical old-plastic-toy-and-useless-junk yard sale that one sees on weekends in the country these days.  No, it was full of marvelous stuff, all of which was priced to move! 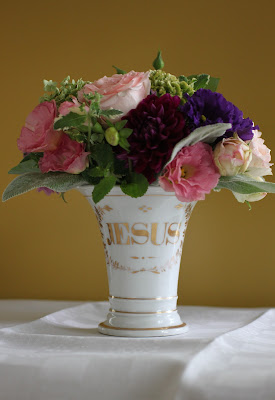 While examining the wares laid out at the sale, I found this Paris Porcelain trumpet-shaped vase on one of the tables.  The vase is from the mid-nineteenth century and is in perfect condition.

In gilt letters it is decorated with the name "JESUS" on one side.  I learned from the sellers that many people had picked up the vase and admired it but couldn't bring themselves to buy it, given their various reactions to its meaning.  Being a fancier and collector of Paris Porcelain, and recognizing that the decoration on the vase was in the spirit of the "Prepare to Meet Thy Maker" Staffordshire plaques from the same era, I scooped up the Jesus vase without a second's thought, paid a mere fifteen dollars for it, and brought it home to Darlington House.  It is a happy, albeit rather unusual, addition to our collection of vases and is an ideal shape for a pretty summer's posey, such as the one in it that I bought at our local farmers market on Saturday from the ladies of Cedar Farm.

Tell me, Dear Reader, do you have any bits of china or porcelain that have sayings or inscriptions upon them?

Photograph by Boy Fenwick
Posted by Reggie Darling at 8:47 AM