Serendipity, a Silhouette, and Rex Whistler

Isn't it funny how things work out, more often than not, Dear Reader? 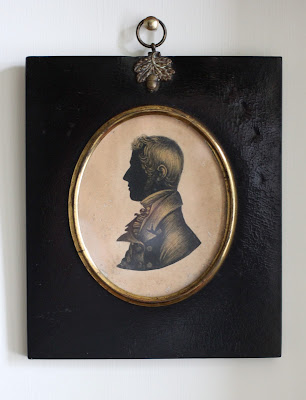 Last weekend I stopped into White Whale Limited, an antiques shop in the nearby town to Darlington House.  White Whale is a favorite destination of ours, as it is run by a family of antiques dealers who have marvelous "eyes" for goods in a number of the areas we collect, and the shop's inventory turns regularly.  It is a rare visit to White Whale that I leave its door without having made a purchase.  My purpose in visiting it on this particular trip was to examine a cache of miniature paintings and silhouettes that one of the dealers acquired at the Keith and Chippy Irvine sale held at Stair Galleries a month ago.  I suspected that such pictures would be on display, as I had seen the dealer at the Irvine sale buying lot after lot of them. 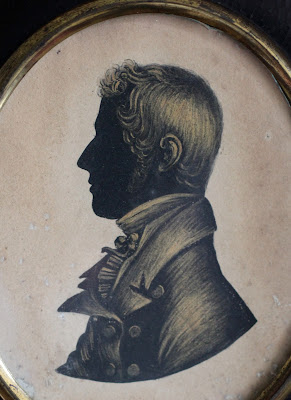 I had refrained from bidding on the pictures myself, as they were being sold in groups of four to ten at a time.  That meant that if one wished to acquire a particular picture in a lot, one was required to acquire all of the others, too.  Fortunately the dealer, who specializes in such miniature pictures (among other things), bought the groups she acquired to sell individually.

Among the pictures on view last weekend was a charming silhouette of a young English Regency dandy, circa 1820, whose curled hair, high collar, neckerchief, and button-festooned jacket were appealingly highlighted in gold paint.  I was drawn to the little picture because the sitter—identified on the reverse as a certain "Richard Wilkinson"—was handsome, the decoration was unusually well done, and it was in its original, undisturbed, period papier-mâché frame. 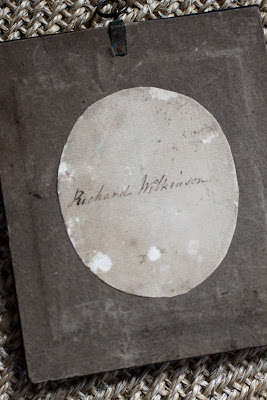 I had seen and admired Mr. Wilkinson's silhouette at the Irvine sale, but had refrained from bidding on it for the reason outlined above.  I was pleased to find it again at White Whale, and more than happy to find that this time it was available on its own.

In addition to finding the silhouette pleasing, Dear Reader, it also reminded me of the illustrations of the English artist Rex Whistler (1905-1944).  The silhouette's painted decoration had his deft and light touch, and his whimsicality, too.  I am not suggesting that I believe my little Regency fellow was painted by Rex Whistler.  I am merely saying that I was reminded of his work when I examined it.  Also that of his contemporaries William McLaren, who illustrated Beverly Nichols' books, and Cecil Beaton, who illustrated his own and others' books (when he wasn't engaged in the other creative activities for which he is justifiably celebrated).

And that is but one of the reasons I came home to Darlington House with Mr.Wilkinson's likeness in hand, where it joins other silhouettes in our collection.  We have hung it on a wall below another small potrait of another dandy of the same period that I also came away with that day, and which shall be the subject of another posting of mine at some point. 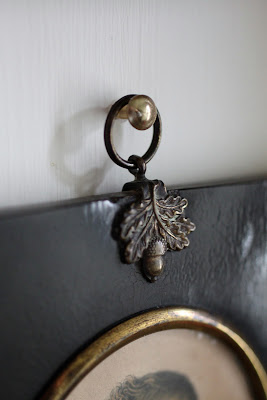 The blogosphere and media are abuzz with anticipation of the imminent publication of a book on Rex Whistler, titled In Search of Rex Whistler, His Life & His Work, by Hugh and Mirabel Cecil.  I know that I look forward to adding a copy of it to my cherished library of books about, by, or illustrated by the artist and his circle, a collection I have been accumulating for nigh on thirty years.

For those of my readers who are interested to learn more about the all-too-short life of the sublimely talented and prolific Rex Whistler, I encourage you to visit the information-packed blogs of The Devoted Classicist and Little Augury, where he and his fellow Bright Young Things have oft been the subject of their marvelous and erudite inquisitions.

Photographs by Boy Fenwick
Posted by Reggie Darling at 10:38 AM