Continuing the theme I explored in my post Reggie's Reflections on "Ivy Style", today's essay is one in which I feature images of knockabout clothing that I actually wore as an undergraduate at Yale, back in the 1970s.  Specifically, my crew letter sweater and my trusty white bucks, both of which are sufficiently talismanic for me that I have held on to them all these many years since. 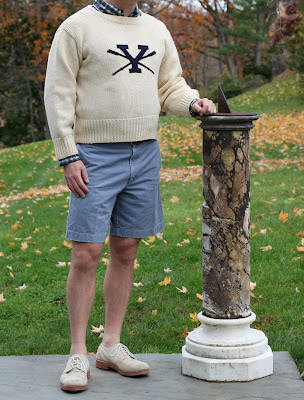 While I am still able to wear the white bucks that my dear brother Frecky gave me for my twenty-first birthday, it has been rather a long time since I have been able to fit into my Yale letter sweater.  With the passage of time one's figure has become rather, um, portly, which is most unfortunate when it comes to one's ability to fit into one's college undergraduate clothing.  Not only is Reggie unable to squeeze himself into his letter sweater, Dear Reader, but the needlepoint belt that his then girlfriend, Victoria Vanderlyn, made for him during his sophomore year is, I am afraid, rather too small to clasp around Reggie's expanded middle-aged waist these days as well.

Ah well, at least Boy gets to wear them (and other articles of my clothing) from time to time . . . 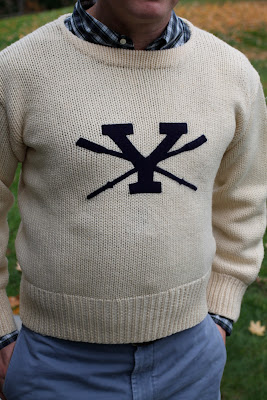 The model for today's essay is George Peterson, the very affable and game husband of boy's assistant designer, the divine Nancie Peterson.  The charming and amusing Petersons spent the weekend with us at Darlington before the onslaught of Hurricane Sandy, and Boy took these photographs of George outfitted in my letter sweater and bucks as a stand-in for yours truly.  We dressed George to look as Reggie might have on an autumn weekend in New Haven back in the day, strolling around the Yale campus or on his way to a football game at the Yale Bowl.  The handsome George is also shown wearing a set of horn-rimmed spectacles similar to ones I wore as an undergraduate, and which I still wear to this day. 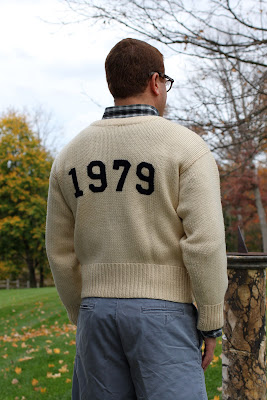 We have purposely posed our obliging model next to a sundial that stands on a garden walkway at Darlington, with the autumn trees and scattered leaves in the background.  Time and tide, as
they say . . .

Tell me, Dear Reader, are there articles of clothing in your closets or chests of drawers that you have fondly kept from your college days and that you cannot bear to part with—like Reggie—even though they may no longer fit you, or have fallen out of fashion?

Photographs by Boy Fenwick
Posted by Reggie Darling at 1:07 AM