Last weekend, Boy and I took a quick spin through a number of antiques shops in the nearby town and came home with this small, framed watercolor portrait of a jaunty young man. 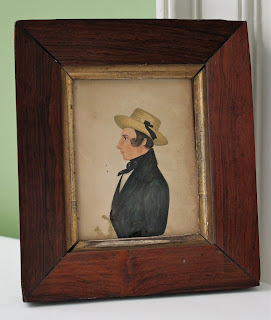 Dating from the second quarter of the nineteenth century, it is a simple and straightforward depiction of a fellow in his twenties wearing a jacket and neckerchief, showing an impressive curl of hair at his temple, and sporting a straw hat adorned with a black ribbon.  And it's small, too, with the outside of the frame measuring only 7 ¼ inches by 6 ¼ inches.  The dealer speculated that the sitter was perhaps a sailor and that the picture was likely American, but could possibly be European. 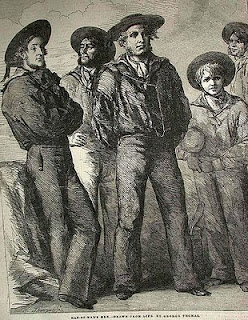 English Man of War Sailors
London Illustrated News, 1854
Although similar hats were worn by English sailors, we think our fellow is most likely an American flatboatman, of a type seen on the rivers and canals of the New Republic, and a subject painted often by George Caleb Bingham. 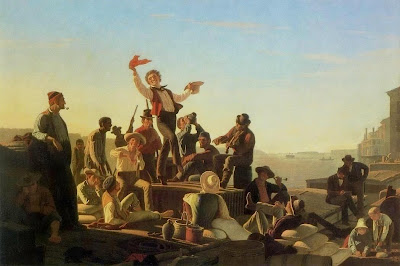 Jolly Flatboatmen In Port, 1857
George Caleb Bingham, artist
National Gallery of Art, Washington, D.C.
On the other hand, we all agreed that he also looked Italian--or maybe French--given his features and the prominence of his finely shaped aquiline nose. 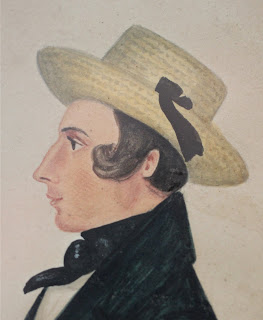 The straw hat he is wearing is similar to several that we saw two weeks ago in the Borsalino shop in Rome, next to our hotel.  Since many of the better straw hats made today, and also those made in the twentieth century, were made in Italy, could it be that all of these nineteenth century fellows are showing off their Italian straw hats?  Was there a mania for these hats in England and America before the Civil War? 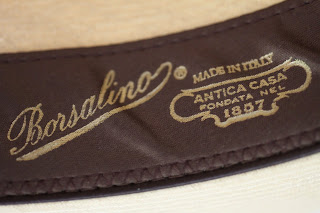 The hat is similar to ones topping several mid-nineteenth-century Staffordshire figures we have at Darlington. 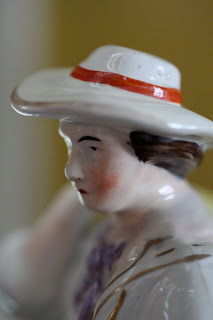 And here is a twentieth century Venetian gondolier wearing a related hat. 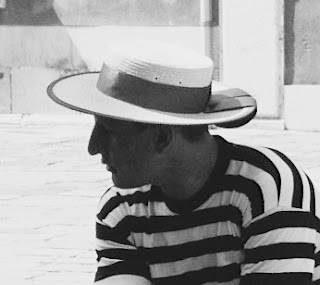 In any event, regardless of the hat's origin or the nationality of the sitter, we thought it to be a charming little picture, and a worthy addition to our collection at Darlington.  Furthermore, given that the asking price was reasonable (for these sorts of things), we agreed to buy it.  Since bringing it home we haven't decided where to hang it (we are running out of viable wall space for such pictures), but I am sure we'll find the right place for it soon. 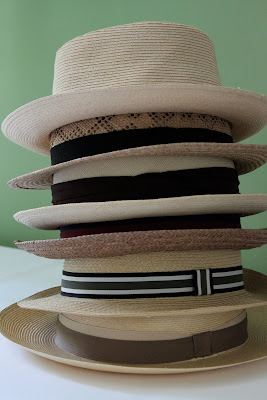 As Boy was photographing the picture it got him thinking about straw hats, as much of our picture's charm lies in its depiction of the wearer's hat.  Not surprisingly, given that it is summer and therefore the time of year that one has straw hats at the ready and about, it was easy to make quick work of assembling a number of ours and photographing them.  For, in addition to collecting art and decorations, we also collect hats.  We have bought ours low and high, inexpensively and dear, and also new and vintage. 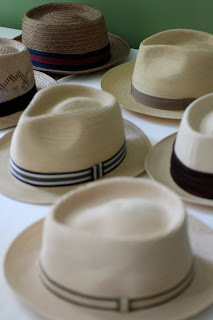 And we wear our hats.  Although I do admit, however, that there are some hats in our collection that it is unlikely either of us will ever wear again.  I doubt that Boy will again wear the blue straw porkpie hat that he bought almost fifteen years ago, and wore out once or twice.  It looked good at the time . . .

However, I think he will always look marvelous wearing this hat, a great favorite: 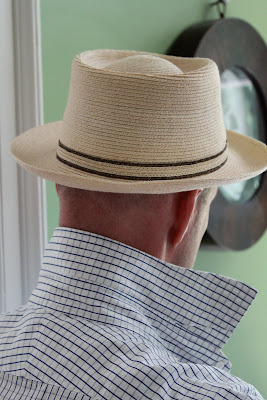