The Best of Reggie: Year One

As one does (or at least one should) at an important milestone in one's life—such as an anniversary—Reggie has spent some time reflecting on the past year of his blog and reviewing his output. 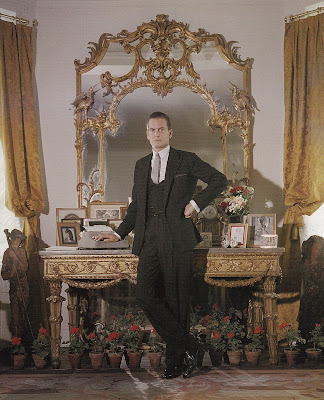 Just as Reggie believes it is appropriate to thank those who have made the journey interesting and rewarding for him in his first year, so he believes it is permissable for him to blow his horn a bit, and gather together in one place the twelve posts (one for every month) that have excited the most responses from you, Dear Reader, or that he has most enjoyed writing.  And he has done so.  They are, so to speak, my greatest hits (pun intended) of the last year.

Starting from the beginning and working my way up to the present, here goes:

My Slim Keith Story was one of my earliest posts, and was the first where I received more than a handful of comments.  In it I relate meeting the legendary society swan shortly after I first moved to New York, and how I then found myself, much to my surprise, sitting in her living room the very next day, having a cocktail and reflecting on what a lucky boy was I.

My First College Mixer, Or How Reggie Got Slapped is one of my favorite posts.  In it I recollect spending a weekend visiting my dear brother Frecky at Yale when I was fourteen, which included Reggie receiving a well-deserved slap to his face by a furious Mount Holyoke girl.

Reggie's Rules for Popular Party Guests was the first post that I wrote in which I outlined my basic rules for acceptable social comportment (a recurring theme here on Reggie Darling), in this case of guests at a party.  In it I explain what I believe a host should reasonably expect of his guests—at least those that he would care to entertain more than once . . .

How Reggie Got His Name relates how it was that my parents came to name me after a woman they employed as caregiver to their children, and how I came to treasure that honor.

Maids Should Wear Uniforms was a post that elicited a firestorm of comments, and more than any other post I have written.  In it I explain why it is that I have come over time to require our housekeepers to wear uniforms as a condition of their employment.  Some people took Reggie to task for this, in some cases quite vehemently, but the majority agreed with him.

The Pompey Chronicles, Part I, II, III, and IV is a series (I know, I'm stretching a bit here—this really is four separate posts) that many of my readers particularly enjoyed.  In it I relate finding, naming, and loving my most adored (and published) pet dog, a pug named Pompey (who is, incidentally sitting in my lap as I write this).

A Peale, a Plant, And a Pot relates how I came to be the unexpected owner of a cutting of a geranium (or is it a pelargonium?) that once belonged to Thomas Jefferson, and which is the subject of a painting by Rembrandt Peale in the collection of the National Gallery of Art in Washington, D.C.

A Cary Grant Story is a great favorite of mine, and also of many of my readers.  In it I relate a story that was told by the mother of a dear friend of ours about her three chance encounters with Cary Grant in elevators in New York City, and the brief conversations that ensued.

Reggie, Lilly, Lilly Boy, is a post in which I ponder the sociological iconography of Lilly Pulitzer clothing, and discuss why it is that Reggie has somewhat mixed feelings about the brand.

The Blossoming of Romance Under the Fascist Sky was one of the more challenging and rewarding posts that I have written in the last year.  In it I discuss how my parents met on a bicycle trip in Europe only weeks before the outbreak of WWII, and what became of their marriage over time.  It moved many of my readers in a way that none of my other posts have.

Why I Will Never Eat at Per Se was much fun to write.  In it I relate a particularly Kafka-esque experience I had in unsuccessfully attempting to make a reservation at one of New York's most sought-after restaurants.

Drapes Is a Verb was also great fun to write, and continued a theme I first explored in "When Is a Vase a Vahz?"  In the post I discuss why it is that one should never refer to curtains as anything but, well, curtains—at least if one aspires to moving in the circles in which Reggie finds himself.

And there you have it: the greatest hits of my first year of blogging, give or take a few . . .

Dear Reader, my goal in writing this blog—as I outlined in my inaugural post one year ago—is to provide you with a diversion from your daily cares.  To the extent that I engage you, amuse you, teach you something, or develop a dialogue with you, I believe I have succeeded in my mission.  And for that I am most grateful to you for giving me the opportunity to do so.  Thank you.

And now, I really must get back to work!

Image courtesy of Slim Aarons' Once Upon a Time, with apologies to Mr. Philip van Rensselaer
Posted by Reggie Darling at 7:56 PM