A New Leaf for a New Year

We are hurtling toward a new year, so it is time to turn a new leaf. 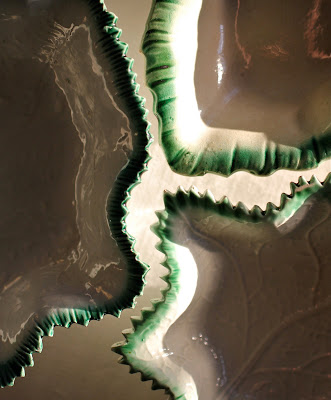 For many years, Boy has collected early English green feather-edge creamware, circa 1780-1825.  He always has his eye out for pieces of it when we are out and about at shows, auctions, and shoppes.  Several years ago he bought two leaf-form dishes, likely made to hold sweetmeats, to add to his collection.  He found the first—a small and very dearly priced one—at the New York Ceramics Fair.  The next day, at a show at the New York City piers, he carried away an almost identical example for a somewhat lower price.  A collection within a collection, instantly!  The other day, while foraging for vintage ornaments at a decidedly down-market group shoppe, Boy spotted this one, another example of the leaf-form dish:


We suspect its plain mold and detailing suggest that it is slightly later than our other two dishes.  The blue in the glaze of the two earlier pearlware examples in our collection is absent, as is the detailed veining, snipped edging, articulated stem, and raised base.  Our newly acquired dish is simply not as finely made or crisply detailed as the other dishes.  Also, it is subtly crazed and slightly discolored.  Because of these deficiencies Boy almost left it behind at the sales desk.  But since he rarely comes across such dishes in his travels, and this one was exceptionally well priced, home it came with us to Darlington House!

I hope that our "new" dish will brighten and whiten up nicely once we give it a hydrogen peroxide bath.  However, it wil never be as fine as our other sweetmeat dishes, regardless of its condition.  But so be it.  The dish was a bargain at the price we paid, and it is a happy addition to those already in our possession.

Tell me, Dear Reader, how do you decide when faced with buying "up" or "down" for your collections?

Photographs by Boy Fenwick
Posted by Reggie Darling at 10:15 PM