Today's essay is a "before" and "after" story.

As you may recall from an earlier post, Dear Reader, this past Boxing Day Boy and I bestirred ourselves for an annual post-Christmas visit to a large (and admittedly rather dismal) antiques groupe shoppe across the river in pursuit of sale-priced vintage Christmas ornaments and any other flotsam and jetsam we might serendipitously find at suitably bargain-basement prices.

While in said shoppe, in addition to finding a well-priced box of vintage ornaments, Boy spied and bought an early nineteenth-century green feather-edge creamware leaf-shape dish similar to several already in our collection at Darlington House.

As was shared in the earlier essay, the "new" creamware dish that Boy found was dirty and discolored, almost brown.  He ultimately decided to buy it, after a little dithering, because he suspected the dish would benefit from a hydrogen peroxide bath to restore it to its original intended whitness.  As readers of this blog may know, hydrogen peroxide is the preferred medium for benignly removing discolorations from china.  One must never use chlorine bleach for such purpose, Dear Reader, as it is far too harsh and can irreparably damage the china.

One must fully submerge the discolored piece in hydrogen peroxide (full strength, right out of the bottle) in a covered plastic container for a minimum of twenty-four hours, and up to a week or more, in order to allow the liquid sufficient time to extract the discoloration out of the body of the piece.

If the piece is rather discolored, as our little leaf dish was, it will turn the clear liquid yellow, as can be observed in the preceding photograph.


Once the piece has been soaked, place it for ten minutes in an electric oven (but not a gas oven, as that supposedly can lead to an explosion) that has been pre-heated to two hundred degrees Fahrenheit (and not higher).  Warming the piece at that temperature and length of time will bring the remaining discoloration to the surface of the piece in the form of tiny brown crystals.  Once the piece has cooled to room temperature, you can easily wash away the crystals with soapy water and a soft brush.


If the piece of china one is seeking to clean is particularly discolored—as was the case with our little dish—it may require repeating the soaking/heating/washing process several times before the china's discoloration entirely vanishes.


So, Dear Reader, when you are out and about at yard sales or antiques malls and come across a piece of pretty, albeit discolored or crazed, bit of china, do not reject it out of hand.  For, with but a little bit of planning and effort, you can usually restore it to its original "as new" condition. 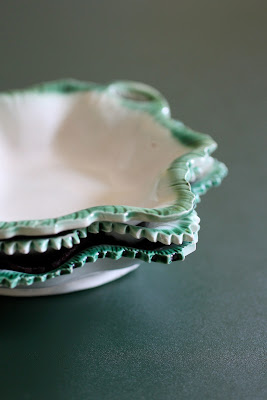 Of course this doesn't apply to all pieces of discolored or crazed china one finds, Dear Reader.  No, some of it (or much of it) may be too far gone or simply not of a quality worth the effort to attempt to clean it.  But out-of-the-way places can yield special finds, such as the leaf dish that Boy found on Boxing Day, on which such an investment of time and effort is indeed well spent.

All photographs by Boy Fenwick
Posted by Reggie Darling at 12:33 PM