The Most Pleasing Receipt of Charleston Receipts

Several weeks ago our friends Jasper Lambert and Francesca Montmore spent the weekend with us at Darlington House.  They arrived bearing gifts, as all well-mannered houseguests do. 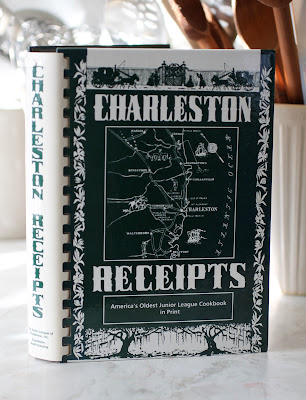 One of the gifts they arrived with was a vintage copy of Charleston Receipts, a recipe book compiled by the Junior League of Charleston, South Carolina.  Originally published in 1950, Charleston Receipts is the oldest Junior League cookbook still continuously in print.  No changes have been made to the original 1950 version of the cookbook, except for some minor editing and reformatting over the years.  The version we received was printed in 1993, the year of the cookbook's twenty-eighth printing.  The 350-page book contains 750 recipes, sketches of regional interest by Charleston artists, and numerous Gullah verses.  Gullah is the Creole language spoken by what the book refers to rather quaintly as "Afro Americans," who are the descendants of slaves and live in the Carolina Lowcountry.

Reggie has a soft spot for cookbooks published by charitable organizations, churches, and schools to raise money for worthy causes.  The cookbook Francesca arrived with is a delightful and appreciated addition to his collection of a dozen or more such volumes, including several others published by other Junior League chapters. 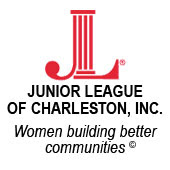 Here is how the Junior League of Charleston describes their cookbook on its website:


Called the Bible of all Junior League cookbooks, Charleston Receipts features recipes that have served Charleston hostesses well for decades and is considered a “must” in any cookbook collection. Described by Food & Wine as “reflecting the nostalgia for the Old-South that prevailed among low-country aristocrats during the postwar (Civil War) era,” Charleston Receipts features a recipe collection as colorful and timeless as the area that it represents. The recipes were influenced by the family cooks, many of whom spoke the Gullah dialect, a centuries-old Atlantic Creole language that is illustrated and preserved throughout the pages of Charleston Receipts. For its outstanding preservation of local and regional culinary customs and its benefits to the local community, Charleston Receipts was inducted into the Walter S. McIlhenny Community Cookbooks Hall of Fame in 1990.

As I have written before, our friend Francesca Montmore is a Charleston aristocrat of ancient lineage, formidable brains, and superlative beauty.  She gave us Charleston Receipts because she knew that we would appreciate it, given how much we enjoy cooking, material culture, and all of the stories she has told us about her colorful forebears and about growing up in Charleston.  Charleston Receipts features a half dozen or more recipes contributed by Francesca's great-aunts and her grandmother, and she grew up eating a steady diet of food prepared from it.  Needless to say, although the recipes for Charleston Receipts were provided by the good ladies of Charleston, it was their Gullah cooks who actually prepared the dishes. 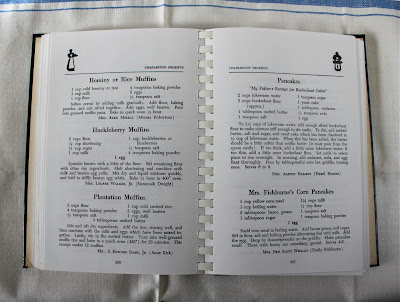 So, why do they call it Receipts, instead of Recipes?  Here's how it is explained in the book:

Throughout the book, as you will see,
We never mention recipe,—
The reason being that we felt,
(Though well aware how it is spelt!),
That it is modern and not meet
To use in place of old receipt
To designate time-honored dishes
According to ancestral wishes. 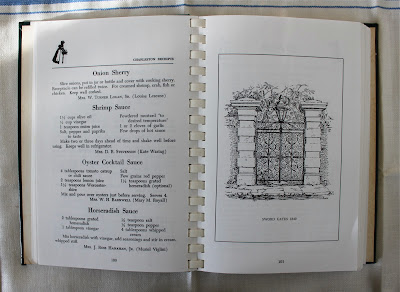 The recipes are straightforward renditions of what today we call comfort food, relying extensively on ample amounts of butter, cheese, mayonnaise, bacon, sugar, heavy cream, and other delicious, calorie-laden ingredients.  One of my favorite chapters is "Short Cuts," made up entirely of dishes that can be quickly prepared and extended, if needed (often with a can or two of cream of celery soup), when extra guests arrive unexpectedly, much to the Gullah cook's exasperation.


Reggie is an admirer of the Junior League and has much respect for its members, exclusively women, who give selflessly and generously of their time and financial support to the betterment of the communities in which they live.  According to the foreward of Charleston Receipts, the Junior League of Charleston is "committed to promoting volunteerism and to improving the community through effective action and leadership of trained volunteers.  Its purpose is exclusively educational and charitable.  The Junior League of Charleston, Inc., reaches out to women of all races, religious and national origins who demonstrate an interest in and commitment to volunteerism."

Reggie's own mother, MD, was an active member of the Junior League of Detroit as a young woman, when Reggie was a little boy.  MD found her experience in the Junior League rewarding and satisfying, and she was rightly proud of the League's contribution to improving the lives of those less fortunate than she.  She also acquired much of her childrens' wardrobes during her weekly volunteer work at the League's Nearly New Shoppe in Grosse Pointe, where she would comb through the gently worn offerings and bring home selections for us to try on, at prices that were a fraction of what they would have cost new at the stores that originally sold them, such as Best & Company and the J. L. Hudson Company.

By selling copies of Charleston Receipts over the years, the Junior League of Charleston has raised more than a million dollars, all of which has been used to fund programs in and around Charleston to benefit the community.  It is a worthy organization, indeed.

Reggie is most grateful for having been given a copy of Charleston Receipts by his dear friend Francesca Montmore.  He looks forward to consulting it and cooking from it for years to come.

Reggie urges you to consider buying your own copy of Charleston Receipts, Dear Reader, which can be ordered directly from the Junior League of Charleston here.

Photographs by Boy Fenwick
Posted by Reggie Darling at 3:15 PM