As I wrote in my previous essay, Reggie is partial to the joys of a gin martini.  Reggie is not only fond of gin, Dear Reader, but of spirits in general, and he enjoys consuming such liquids regularly, if not daily.  Although he adores the imbibition of spirits, he is careful to regulate the amounts he pours down his gullet by measuring his portions in a silver jigger designed specifically for said purpose.


In his opinion, there is no more delightful jigger with which to measure (and in Reggie's case limit) the pouring of devil booze into one's glass, and ultimately down one's throat, than the vintage silver "STOPLIGHT JIGGER" once made by the Gorham Manufacturing Company, and shown in the above photograph. 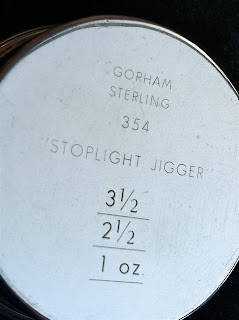 Standing but two and three-eighths inches tall, the silver jigger is conveniently divided into three portions of one ounce, two and a half ounces, and three and a half ounces, and provides a most useful and clever correlation with a street stoplight.  The smallest portion, identified by an image of an enameled green stoplight, is equivalent to a single shot ("Go ahead!"); the middle portion, with a yellow stoplight, is equivalent to a double ("Careful!"); and the largest portion, with a red stoplight, is hefty enough to get one snockered when administered in a single dose ("Stop, you fool!").

Reggie has been a fan of the Gorham silver stoplight jigger for many years, having first acquired one several decades ago.  We keep (and faithfully use) one at Darlington House and another in our city apartment.  The one at Darlington can be seen sitting on a cocktail tray featured in my Lenten Ashes post last year.

Reggie likes the stoplight jigger enough that he bought two more of them this past weekend at the large antiques show he attended in New York.  Now he has on hand said jiggers to give as gifts to fortunate friends when circumstances call for doing so.


The Gorham Manufacturing Company is today but an unfortunate shadow of its former self and long ago ceased making its stoplight jiggers.  However, these delightful little measuring devices can readily be found at antiques shows and online, and in Reggie's view are a worthy (and appreciated) addition to any household's cocktail tray.

Photographs by Boy Fenwick
Posted by Reggie Darling at 8:56 AM